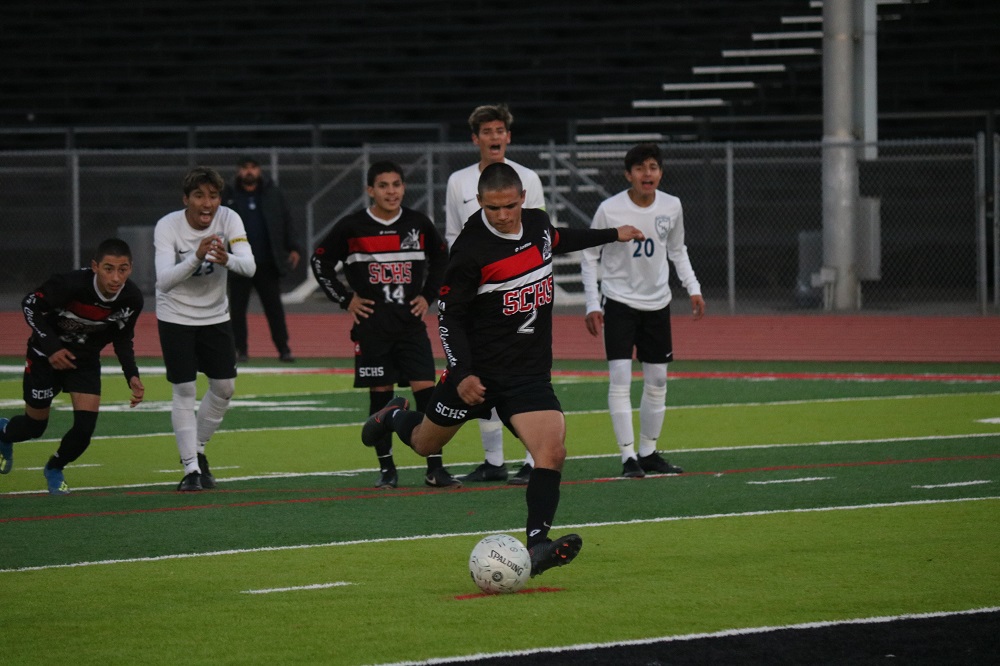 SAN CLEMENTE – After an undefeated run through league play, the San Clemente boys soccer team is back in the Division 1 playoffs looking to right the results from a year ago, and the Tritons wasted no time in getting off on the right foot on Thursday, Feb. 6.

Blake Bowen cracked open the game with a penalty kick goal, and Evan Dilbeck put together a hat trick on the end of a couple slick passing plays in the second half as San Clemente rolled over Century of Santa Ana, 5-0, in a CIF-SS Division 1 first-round match at San Clemente High School.

“We wear on people,” San Clemente coach Mike Pronier said. “It’s one of the fitter and quicker teams I’ve had. I thought that Century played very well. We sort of felt lucky to be up 2-0 (at halftime). I was pretty happy with that because I knew if we kept pushing, it’s hard for teams to keep up with the way we play.”

Blake Bowen earns and converts the early PK to give the Triton’s a 1-0 lead vs. Century. pic.twitter.com/sOKWNaW3G4

Last season, San Clemente made a run to the Division 1 semifinals and SoCal Regional Final where they lost in a shootout and in overtime, respectively. After coming so close to glory, those moments stuck with the Tritons as motivation this season.

“We’ve been looking forward to this all year,” Dilbeck said. “After losing in the state final last year, we keep our focus on getting back to CIF. It’s imbedded in our brains. We want to get that ring.”

San Clemente held the early run of play and took advantage of Century’s tight defense against Bowen. Century had a defender sticking to Bowen’s side through an early San Clemente push, but the senior drew a penalty kick on a dash to the box in the 16th minute.

“No. 3 (for Century) was doing his job,” Pronier said. “Blake had really good patience, we’ve talked to him about that this year. He kept his head about him, and eventually we got the better of the situation.”

Bowen sent the spot kick to the left side off the hands of the goalkeeper and into the net for the lead, 1-0.

San Clemente continued to own the possession numbers but didn’t strike again until the 39th minute with a little help from Century. Dilbeck sent a cross from the right side to the near post, and the ball went off a Centurion defender and into the net for the two-goal Triton advantage just before halftime.

The Tritons kept things rolling in the second half.

Koosha Jadbabaei knocked in a header in the 45th minute for the three-goal lead, and Dillbeck converted a strong passing play 11 minutes later.

Daniel Tuscano charged forward from midfield and dished over to Liam Linas on the right side. Linas placed a ball around the charging goalkeeper to Dilbeck who put the ball in the wide open net, 4-0.

In the 64th minute, Dilbeck took advantage of some more slick plays. Quinn Richards swiftly beat his man down the left side and sent the ball to Jovanni Gomez at the top of the box. Gomez couldn’t find his footing for the shot and back-heeled to Dilbeck who one-touched a shot by the keeper diving the wrong direction for the fifth Triton goal of the game.

The three goals marked the third hat trick of the season for Dilbeck.

Both Triton goalkeepers played a half in the shutout effort. Curtis Harvey started the game, and Ryan Kowarsch came on for the second half.

The teamwork and passing plays shown by San Clemente in the second half are evidence of the consistency Pronier has looking for from his group down the stretch and into the bigger stages.

“We’ve changed our line-up a lot,” Pronier said. “We’re lucky to have a fairly deep line-up. We’re getting more consistent with our line-ups, and I still believe that this team has room for improvement. And that’s hard to say with how good they’ve been playing.”