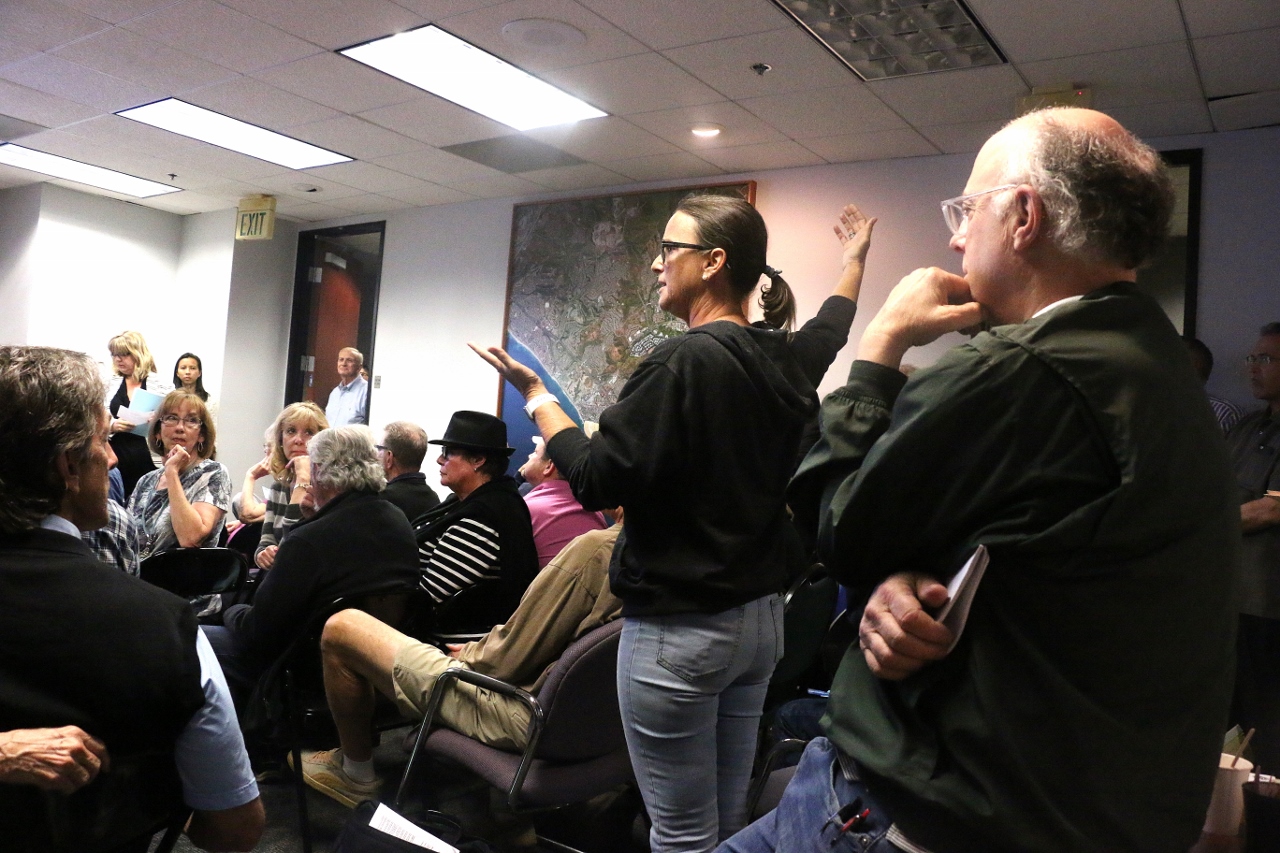 Property owners and other local residents voiced strong, mostly dissenting, opinions of the signage proposed by the Outlets at San Clemente during a supplemental environmental impact report (SEIR) meeting on Thursday at the city’s offices.
In its entirety, the proposal seeks to implement 36 permanent freeway-facing signs, 25 of which to be placed on the “main portion” of the Outlets with “halo-lit” backlights. There is also a proposal for a 45-foot tower that would denote the Outlets location as well as be available for additional signs.

The signage proposals were approved years ago when the Outlets was still a brainchild of its developers, but a lawsuit in 2007 found the environmental report on the signage lacked scope of four factors: aesthetics, biological resources, land use/planning and transportation/traffic. All other requirements under the California Environmental Quality Act have already been accepted by the court.

People who want to comment in writing on the supplemental report to request what should be studied in the report may submit them to the city by April 26. The comments must be submitted to Cliff Jones, the lead city of San Clemente planner on the project, at 910 Calle Negocio, Suite 100, City of San Clemente, CA, 92673, or by email at jonesc@san-clemente.org.

Jones told people who attended the meeting that view space, nighttime lighting and other concerns the public raised would be taken into consideration by the city during the environmental review process. He also said the city intends to have the supplemental draft completed and a the signage proposal sent to the city’s Design Review Subcommittee or Planning Commission by mid-July, with the hopes that it will reach the City Council for final approval by October.

Suzanne Schwartz of RSM Design, who said she has been in the “sign industry” for more than 20 years, said the signs proposed are too big and not aesthetically pleasing. She made comparisons to other successful malls with smaller signage during a meeting Thursday at the city of San Clemente offices. Photo: Eric Heinz

Cliff Jones, lead planner for the project of the Outlets at San Clemente signage proposal, gave a presentation and background information at a meeting on Thursday, April 13, at the city offices.

Amber Gregg, interim city planner for the city of San Clemente, listens to people speak at Thursday's meeting regarding signage at the Outlets as another audience member raises her hand to speak. Photo: Eric Heinz

Gail Hiduka, center in white, said she fears properties affected by the signage lighting and presence will lose value if the Outlets signage proposal is approved. Photo: Eric Heinz

Susan Jenrich, general manager of the Outlets at San Clemente, attended the Thursday meeting with a few of her co-workers. The Outlets signage application was approved more than a decade ago, but a lawsuit in 2007 required more environmental scope before the signs could be put in place. Photo: Eric Heinz

Harry Mark said during Thursday’s meeting that the proposal designs of the signage project do not accurately show what will be put in place for the Outlets signage. Mark said he was involved in the 2007 lawsuit that required the proposal to address more environmental concerns. Photo: Eric Heinz

The city of San Clemente amended its sign ordinance last year in order to curtail giant pole signs near the freeway and to limit the visibility of signs near the I-5 freeway. The Outlets reached an agreement in 2014 with the city, which bound them to the original proposal and not the new signage requirements.
Proposed signs would range from 31 square feet to 130 square feet. The main identification sign for the Outlets is proposed at 200 square feet.

People who attended the meeting said the signs would be a distraction to freeway motorists and that having as many as 36 signs would be problematic in many ways.

A study published by Caltrans in September 2016 studied the effects of roadside advertisements explains in detail a survey that was taken by online respondents. The results can be found by clicking here.

The study noted it found “interesting” results based on a number of factors. But the overall theme was, “The implications of this study are that advertisements should be kept to a minimum at busy junctions and areas where drivers need to concentrate.”

Harry Mark, who said he was involved in the original lawsuit against the Outlets signage, said the proposals submitted were “equally as bad” as the original proposals and that he didn’t think the graphics presented at the meeting were representative of the final product.

“What is shown here is irresponsible,” Mark said. “What is being asked for are twice the size than the perspective that is being shown here. We are not getting the proper documents to evaluate this from a CEQA perspective.”

Mark said he wanted documents showing the proposals to scale and full representation of the signs before they’re put in place in order to evaluate them properly.

Gail Hiduka said she was particularly concerned that property values would decrease because of the advertisements muddying views and increased nighttime lighting. Hiduka said she would like signage at the Outlets to direct people from I-5 to the stores and that the individual sings for businesses would be unnecessary.

“Pretty much, you know what’s in an outlet mall,” Hiduka said. “It’s the same old stores in every single outlet mall there is.”

Officials with the city said the lighting will be turned off one hour after businesses close, with restaurants staying open a bit later, and hotel signs would be on 24-7.

James Smith, the president of the homeowners association of Bella Vista, said his residents were not given adequate notification of the meeting or the proposals.

The city published the notice of the meeting and supplemental review on March 28 under its Current Projects site. Officials also sent out notices to people whose home is within 300 feet of the project, as is required by the city, but the officials conducting the SEIR said that was not far enough and want to reach more people in the area.

To see all the proposals intended to be submitted by the Outlets at San Clemente, click here.

Editor’s note: A more in-depth story will be published in the April 20-26 edition of the San Clemente Times. Comments from representatives of the Outlets at San Clemente will be provided once communication has been received.