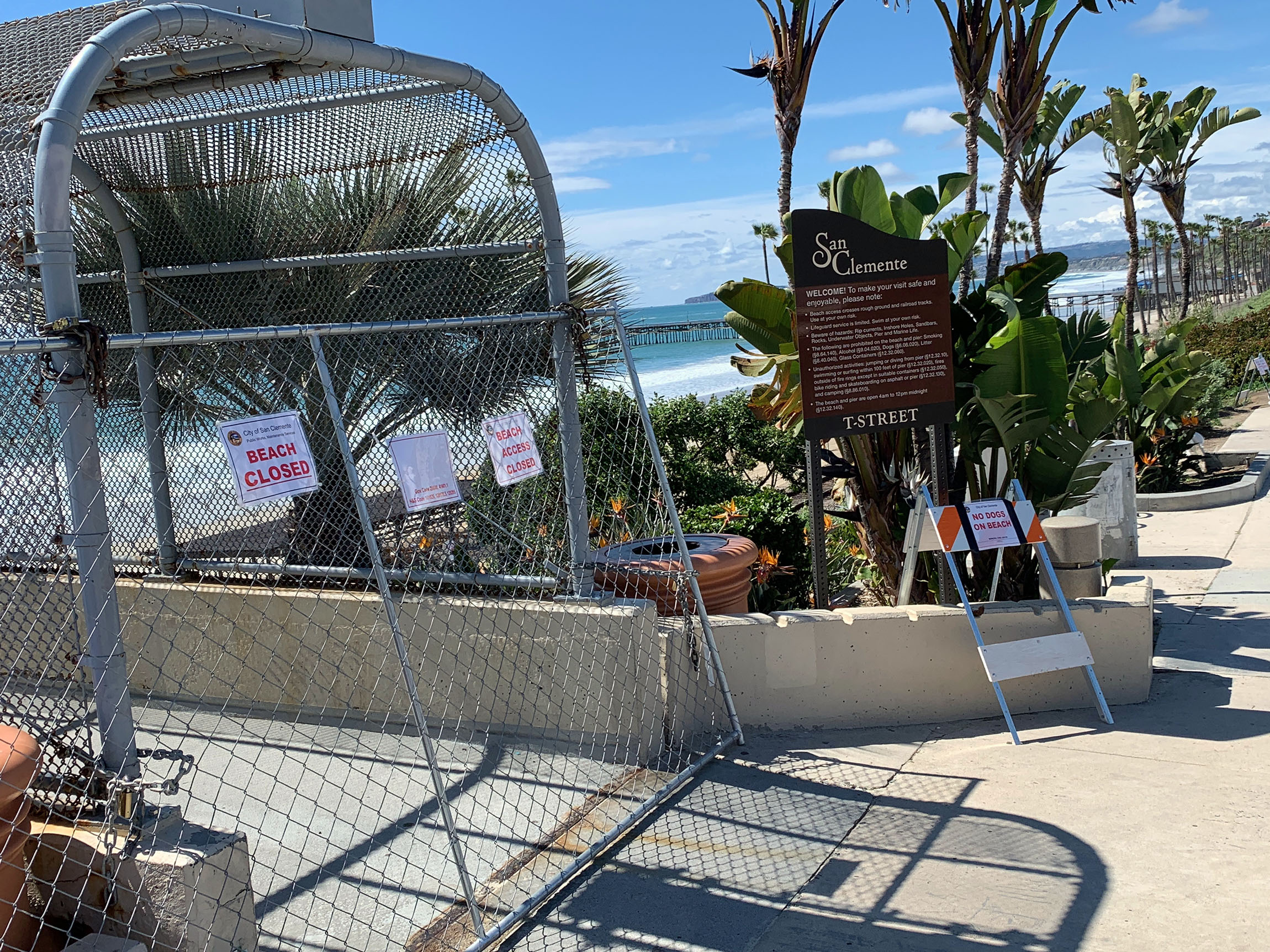 A week after San Clemente’s beaches were reopened to allow citizens to surf and exercise, Gov. Gavin Newsom on Thursday, April 30, issued a new order, directing all of Orange County’s beaches to close temporarily.

During his daily press briefing Thursday, Newsom said the order is targeting only Orange County’s beaches, and is “very focused” while “trying to solve a health problem; trying to mitigate one that can grow into the future.”

“We’re going to have a temporary pause on the beaches down there,” he said, emphasizing it included state and local beaches.

The governor’s order comes as a direct response to the thousands of people who flocked to some of Orange County’s beaches last weekend when a heat wave hit Southern California.

News photos of the large crowds visibly defying the state’s social distancing guidelines this past weekend, notably in Newport Beach and Huntington Beach, gained widespread media attention and drew the ire of the governor.

Late Wednesday night, April 29, a memo that the California Police Chiefs Association sent to police chiefs throughout the state, leaked to the press, explaining that Newsom was expected to announce a statewide closure of all beaches and state parks.

Newsom on Thursday clarified that “we are going to do a hard close just in that part of the state, just that county.” The governor also said he hoped it is “a short-term adjustment.”

A letter from the Governor’s Office of Emergency Services sent to the city of San Clemente on Thursday explains that the temporary order will go into effect Friday, May 1, prohibiting all activities on the beaches such as sunbathing, walking, running and watersports.

“We are hopeful and confident that we can collaborate with local Orange County leaders to identify measures that can restore safe beach access soon as possible,” the letter states. “But until such time as those measures are in place, this additional step to preserve public health and safety has proven essential.”

“I know emotions are running high, people are tired of being cooped up at home,” Bartlett told San Clemente Times. “Public safety and health is the number one priority. As we look to the future, we need to find an appropriate balance.”

Bartlett pointed to San Diego County as an example for a community effectively able to keep beaches open for active use.

“There are ways we can safely use the beach but keep everyone moving,” Bartlett said. “We have a number of members of the community who want to recreate. But we want to do everything we can to reduce the spread.”

A statement from Sheriff Barnes

He goes on to address the overcrowding at the beaches this past weekend, stating that he saw the majority of those beachgoers acting responsibly while the authorities addressed “instances of unsafe activity in a reasonable manner.”

“I implore the Governor to reconsider his action and work with local authorities, allowing us to address the few while not penalizing the majority,” he continued.

Newsom had noted during his Thursday briefing that Orange County is among the top four communities where the state has seen a concentration of cases.

As of April 29, there have been a total of 48,917 confirmed cases of coronavirus in California, with 1,982 fatalities, according to the California Department of Public Health. The largest pocket of cases in the state has centered on Southern California, particularly Los Angeles County, where there have been 22,560 positive cases.

Based on the most recent data from both the state and the Orange County Health Care Agency, the number of cumulative positive cases in Orange County is roughly 2,400 with about 45 deaths.

About 4,000 people in California who have contracted the virus are currently hospitalized, with 1,186 of them being treated in intensive care units, the latest health department data reports. Nearly 200 of those patients are in Orange County, and among them, 63 are in ICUs.

Nationwide, the U.S. this week hit a milestone in total case count, reaching more than 1 million cumulative cases, according to the Centers for Disease Control and Prevention. More than 57,500 people have died of COVID-19 so far in the U.S.

“The Coastal Commission’s entire mission is ensuring access to the coast, and I recognize that many Southern Californians will be very disappointed with the decision,” Padilla said. “However, the governor’s action will serve to protect the health, safety and lives of all Californians. Our coast is a precious resource for all of us but today we should remember what’s most precious—life itself and the health of our communities.”

Padilla is also a Chula Vista councilmember. He says he had COVID-19 and was hospitalized for three weeks and in ICU on a ventilator for 11 days.

This is a developing story

Below is the initial version of the story published late Wednesday evening, April 29.

Gov. Gavin Newsom is expected to direct all beaches and state parks in California to close effective Friday, May 1, according to a widely circulated memo from the California Police Chiefs Association.

The memo was sent to police chiefs throughout the state Wednesday, April 29, in order to plan ahead of Newsom’s order, which is anticipated to come down Thursday, April 30.

The governor’s decision to close all beaches and state parks come on the heels of heat wave that hit Southern California this past weekend, attracting thousands of people to flock to coastal cities, such as Newport Beach and Huntington Beach.

The closure will also come a week after San Clemente’s beaches and coastal trails reopened for active-use, which allowed residents to surf, swim, run and jog, but not lounge or loiter.