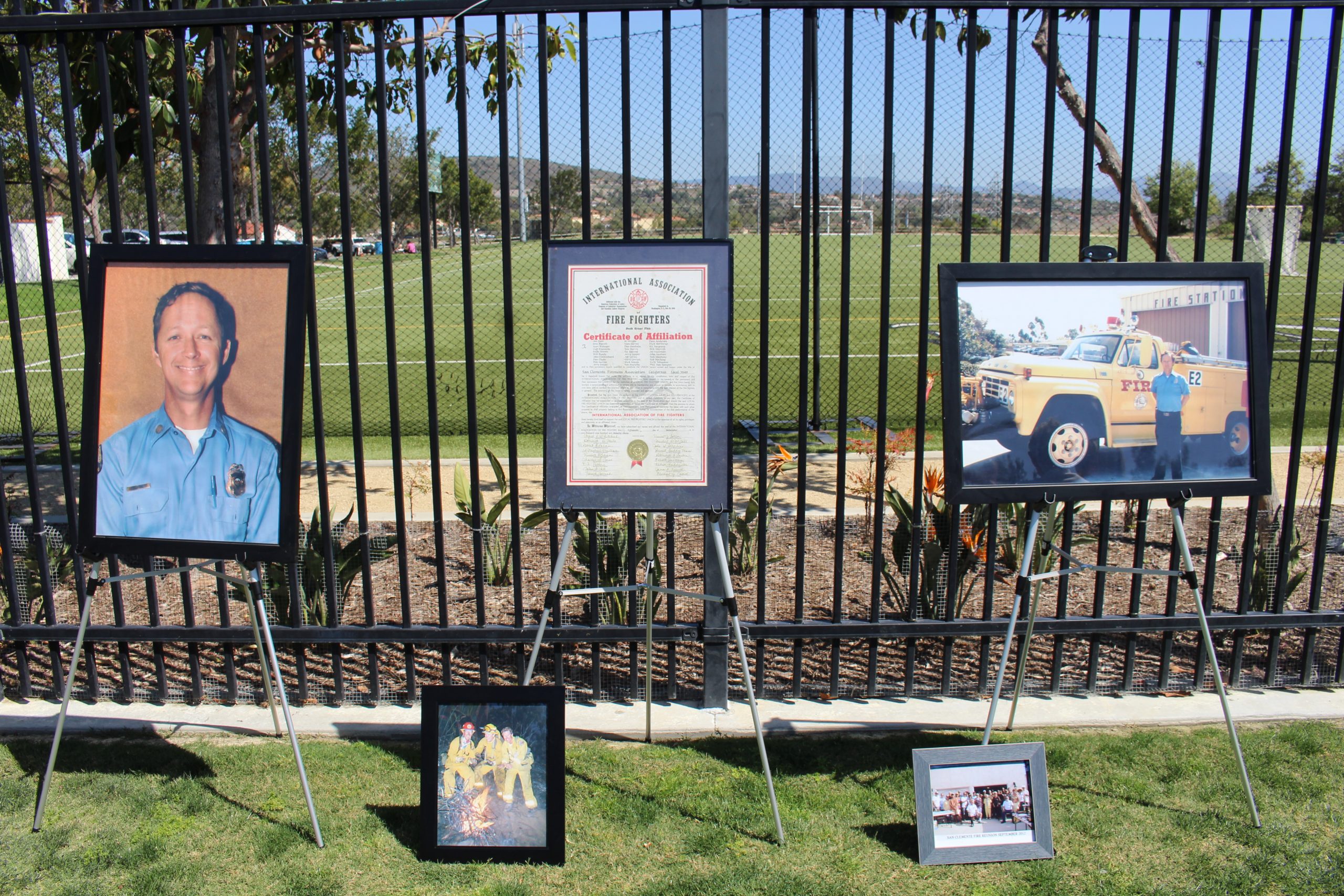 The memorial service on Sunday, March 27, for the late Jim Dahl, a former San Clemente mayor and councilmember, drew a significant turnout from many within the community who donned Hawaiian shirts in honor of the longtime civil servant’s well-known attire.

Jim Davis, a friend and member of the Exchange Club of San Clemente, provided the welcoming remarks at the Vista Hermosa Sports Park, where he highlighted details that the Dahl family prepared, including Dahl’s propensity for snake hunting, walking his dogs, and his time as the owner of a 76 service station in Dana Point.

“He loved his family,” said Davis. “(He was) a true family man with a genuine civil servant heart.”

Other speakers, including OC Board Supervisor Lisa Bartlett and former Councilmember Wayne Eggleston, all knew Dahl from his time with the city’s fire services and on the City Council.

Through Bartlett’s time on the Dana Point City Council, and their service together on other regional boards, she saw Dahl’s passion for community service and full commitment to whatever he was doing at the moment.

Bartlett shared a memory from her first board meeting for the toll roads, in which Dahl excitedly told her that he was able to wear Hawaiian shirts and shorts to the meetings because the CEO did the same thing.

“He just thought that was the greatest thing,” she said. “That was his favorite wardrobe; he loved it. He loved to be casual and be out there in the sunshine, enjoying life.”

Bartlett thanked Dahl’s family for supporting his efforts to serve, and presented them a Certificate of Memorium from the County Board of Supervisors.

San Clemente Mayor Gene James cherished his friendship with Dahl over the three years he was able to get to know him.

James said they spoke frequently on the phone, and told of the meetings the two would have along with other friends and community figures at the weekly farmers market.

“Speaking of Wayne and Jim’s relationship, it was like being at Wimbledon and watching tennis,” James said. “Wayne would say one thing, Jim would say another, back and forth, back and forth. But there was brotherly love there. There was respect, admiration.”

James said he will remember Dahl’s commitment to service and his passion regarding the number of crewmen assigned to the city’s fire engines.

Before reading a proclamation from the city, he also spoke of a recent motion to pass the “Jim Dahl Ordinance,” which would dictate four-member fire crews in San Clemente, and he assured guests that there will be a bench placed in Dahl’s memory at the municipal golf course.

Gary Lovrien, who knew Dahl for about 50 years, including working together at the San Clemente Fire Department, described his late friend as a “brother.”

Lovrien shared work stories, such as when he found Dahl stuck while getting out of their fire engine to battle one particular fire, and Dahl “moo-ing” at a loose herd of cows on Interstate 5 to direct them off the freeway.

“Jim was the most fun person to work with; he had a serious side, but we just had the greatest time,” he said. “We’ll miss him forever.”

Dahl had his own share of gaffes while on the City Council, Eggleston remembered, but the two were always friendly, even as Dahl was unafraid to speak his mind.

Eggleston recalled a controversial period in which the city was discussing building 300 homes near the municipal golf course.

“People got up to the podium at the City Council meeting and they said, ‘You can’t do that, traffic during rush hour is going to be horrible on (Avenida) Pico!’ ” Eggleston recalled. “Well, Jim said, ‘Don’t go on Pico during rush hour!’ ”

Eggleston added that Dahl admitted afterward that he probably should not have said what he did, as one of Dahl’s classic one-liners.

Throughout the years, they grew closer as their respect and love for one another showed, and the former councilmember finished by saying he will miss Dahl deeply.

Another former colleague of Dahl’s at the fire department, Mike Brown, described meeting Dahl while playing golf one day, which would eventually lead to Brown joining the department.

“I’m not ‘Mr. Talkative,’ but this guy, Jim … I’d never heard anybody talk so much, especially on a golf course,” Brown said. “He ended up finding out everything there was to know about me by the end of the round.”

Years later, the two of them were sent to Florida to drive back a fire engine the city had purchased, and the trip back was full of memories.

“We pick up the engine, we start to drive out the driveway, off we go, and Jim turns to me and says, ‘Where do you want to go first?’ ” said Brown, eliciting laughter from the audience. “And I said, ‘I don’t know; you got any ideas?’ He goes, ‘Let’s go to Disney World.’ ”

They decided to stay all day at the amusement park and made another stop in New Orleans before finally making it back to San Clemente.

Having fun was part of Dahl’s character, but he always displayed care and compassion for others, as well. Brown also thanked Dahl for introducing him to the golf group of Exchange Club members and friends with whom Brown still plays, years later.

To close, Davis commented on how everyone was surprised by Dahl’s unexpected passing, but he also added there was a lesson to learn from it.

“Now is the time to express our love to family and friends,” Davis said. “If you have some family or friends that you really haven’t said hello to in a while, or maybe there’s something that caused your friendship to sour, now’s a good time to give them a call, to see them, to share your love (with) them.”

“You just never know,” he added. “We have no guarantee of tomorrow.”