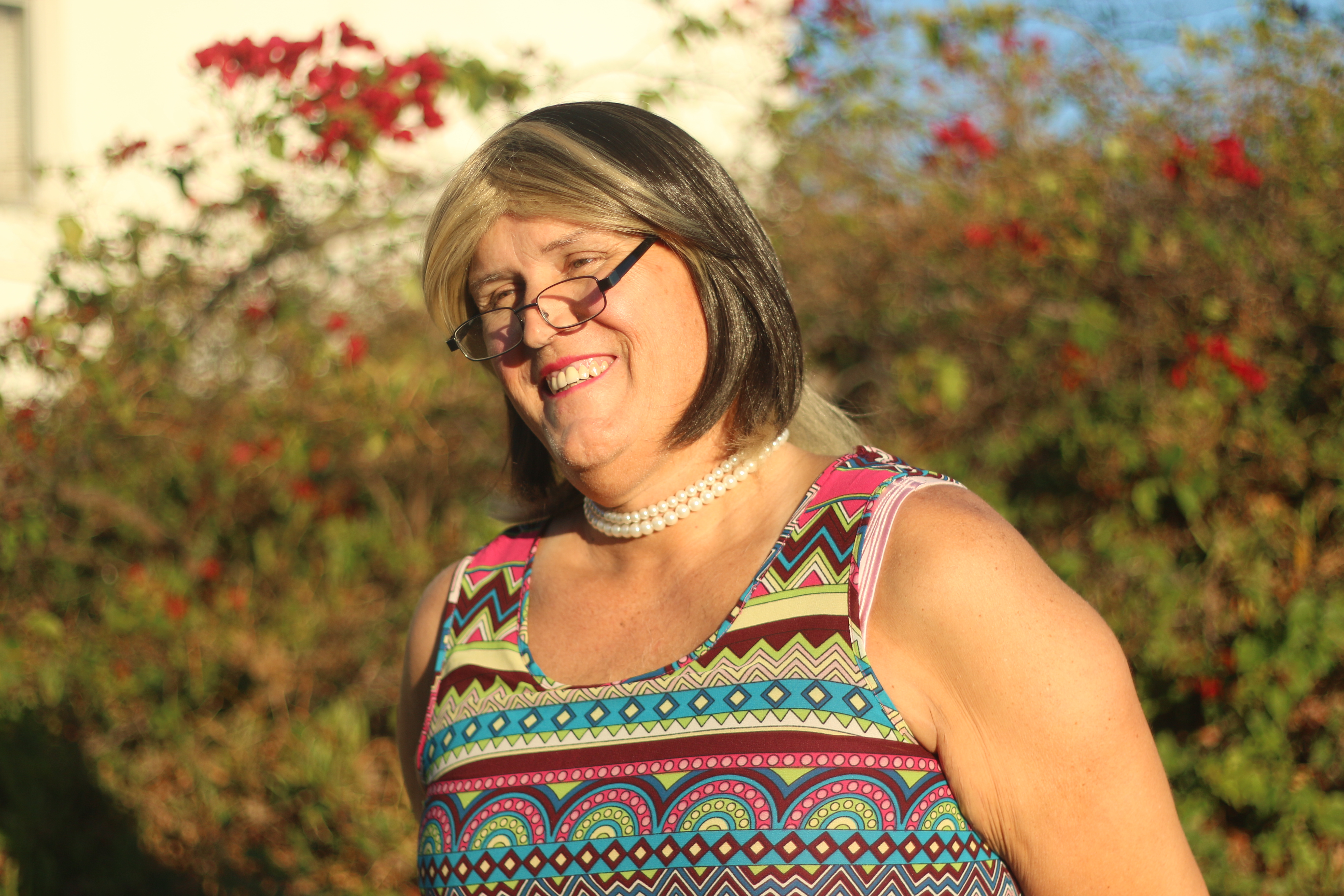 Editor’s Note: This is the first part of a two-part series about transgender policy in the Capistrano Unified School District and the people it affects.

As a member of the Navy, courage is a required trait. For Marsha (formerly Marshall) Morgan, that attribute has been exemplified in another way.

A San Clemente High School graduate and current city resident, Morgan is a former sonar technician with the U.S. Navy and has been a bus driver for Capistrano Unified School District for 17 years—and she is currently making her transition from man to woman.

Morgan said the reception of her transition has been mostly positive.

“Last year I was presenting as male, but there were some subtle, feminine hints,” Morgan said. “Some kids started calling me Ms. Marsha. Recently, a group of high school students came to the front of the bus and asked me if I preferred male or female pronouns. I had to praise them six ways from Sunday for that; I told them how appropriate it was.”

Morgan said seeing a voice coach to help her speak more feminine is part of the psychological transition.

“What you have to understand is I bus 80 kids around the district, and the difference between this voice,” she said, speaking in an authoritative and masculine tone, “and this voice,” changing to the quieter, feminine tone, “is one gets their attention and the other just kind of makes them giggle.”

Morgan’s public transition is fairly recent. When she was a child—identified as a boy—her mother found a stash of feminine items, which led to her being shipped to a military school in San Diego.

Being separated from her family, Morgan was very depressed at the military school and was eventually sent back to home.

Later in life, she discovered that getting the transitional operation would be affordable.

“This is the true me, and 53 years of being in the wrong body is going to be fixed in a year.” —Marsha Morgan

“Once I knew what could be done, a transition-type surgery, I always wanted it but knew it was always out of reach and I wouldn’t be able to afford it,” Morgan said. “As soon as I found out that a transition was possible, I was ready to go. There was no second thought about it. This is the true me.”

Morgan said the most recent CUSD health insurance plan would enable her to start the transition to becoming the woman she wanted to be. Gender modification surgery can cost more than $100,000 for the whole process. There are other countries that perform the surgery frequently, but Morgan said the quality may not be as high.

In order to qualify for the surgery, Morgan had to see a psychiatrist who would have to diagnose her with gender dysphoria.

“After about 30 minutes with the psychiatrist, I was diagnosed,” Morgan said, adding she has been going through hormone replacement therapy. “The only thing ( CUSD officials) asked was if it would affect my job performance, and I said it wouldn’t.”

The recovery from the surgery takes a bit of time. She said because the surgeons who are within the insurance network have been inundated with appointments, it could be this summer or next before she has surgery.

Although her first experiences with military life were not enjoyable, Morgan said she felt the call to serve her country. She entered the Navy at 25 years old as a sonar technician, achieving high marks in her classes. She spent six years as a Sailor. In doing so, she was able to pick the position of her choice.

Shortly thereafter, she was deployed to the Persian Gulf in 1991 for six months during Operation Desert Storm.

Aboard the U.S.S. Topeka submarine, it was her responsibility to track ships within the gulf. What made it extraordinarily stressful, Morgan said, was that the Persian Gulf isn’t deep enough to avoid detection.

She went back for a second tour during Desert Shield. The U.S.S. Topeka was the first American submarine to enter the gulf, and Morgan received an expeditionary medal for the mission. She also received medals for national defense, a Southwest Asia medal and one for expert marksmanship.

Although she enjoyed the Navy and succeeded while enlisted, Morgan said she was “a little too civilianized” by the time she joined to remain there for a lifelong career.

“Unfortunately, the same thing that gets me into trouble today got me in trouble in the Navy,” Morgan said. “My mouth gets me in trouble; I don’t hold back (my opinion). If they told me to do something ultra-stupid or dumb, I was more than happy to go do it, but I’d tell them what I thought.”

Morgan said she was glad she enlisted in the Navy but wished she had entered earlier in life. Although she was nearly discovered as a transgender person in the Navy, she said her fellow sailors weren’t bothered by what they found.

“At one point, my stash of feminine items had been discovered,” she said. “I came up with a very quick and clever explanation. I said they were ‘trophies.’ I had a submarine reunion a few years ago and presented as Marsha. They were all comfortable with it and some of them were not at all surprised by it.”

Morgan said she has experienced some discomfort while working in CUSD regarding bathrooms.

“I anticipate that in any (public) restroom,” she said. “I was using the men’s room because over 17 years, the people I’ve worked with have known me as Marshall. I don’t believe there were complaints; there were concerns.”

Morgan’s driver’s license now designates her as a woman, allowing her to use the women’s bathroom, but that has taken some of her coworkers some time to get used to, she said.

CUSD is currently in the process of amending its policy to reflect the needs of its transgender students and employees. Currently, Morgan said, there isn’t much that covers employees except for state and federal anti-discrimination laws.

The most recent amendment proposal discussed by the CUSD Board of Trustees adds in language specifically relating to gender identity anti-discrimination policies.

Eventually, Morgan said she came to a mutual understanding with the district to use the men’s room before she makes her full transition.

“The school district has been great about it; they’ve had no qualms about it,” she said.

Her CUSD identification still reads Marshall because the Orange County Superior Court needs to grant the name change, which should happen Jan. 6.

Morgan has received awards from CUSD for outstanding demonstration for driving and was nominated for classified Employee of the Year, a certificate of recognition from the county, in  addition to receiving other commendations.

Morgan married a woman who had a daughter from a previous relationship. Admittedly, Morgan said the relationship was already strained and the blossoming of Marsha had destroyed any hopes of reconciliation. The couple is in the process of a divorce.

“My biggest mistake was not coming out to my wife or then-fiancé before getting married,” Morgan said. “Now that I had a family, I thought I could put Marsha away for good—didn’t happen. My wife discovered Marsha about a year into the marriage. She was tolerant so long as she didn’t have to see it or deal with it.”

Morgan said she started going public with her transgender status in 2005. She said she wanted to share her story to continue the discussion of accepting transgender people.

“It brings it into the limelight,” she said. “Anyone I know that is of the trans-community is 30 to 40 miles north of (San Clemente). I’ve been told by my friends in support groups that I should start something down this way. I don’t know if that’s a task or project I’m willing to take on.”

Other social situations such as going to the beach and developing head hair due to the hormone replacement are adjustments to the physical aspects.

“I’ve never had a nasty look or stare down here,” Morgan said. “The worst I’ve had is a chuckle or something like that.

“This is the true me, and 53 years of being in the wrong body is going to be fixed in a year,” Morgan added.

—Allison Jarrell contributed to this report.