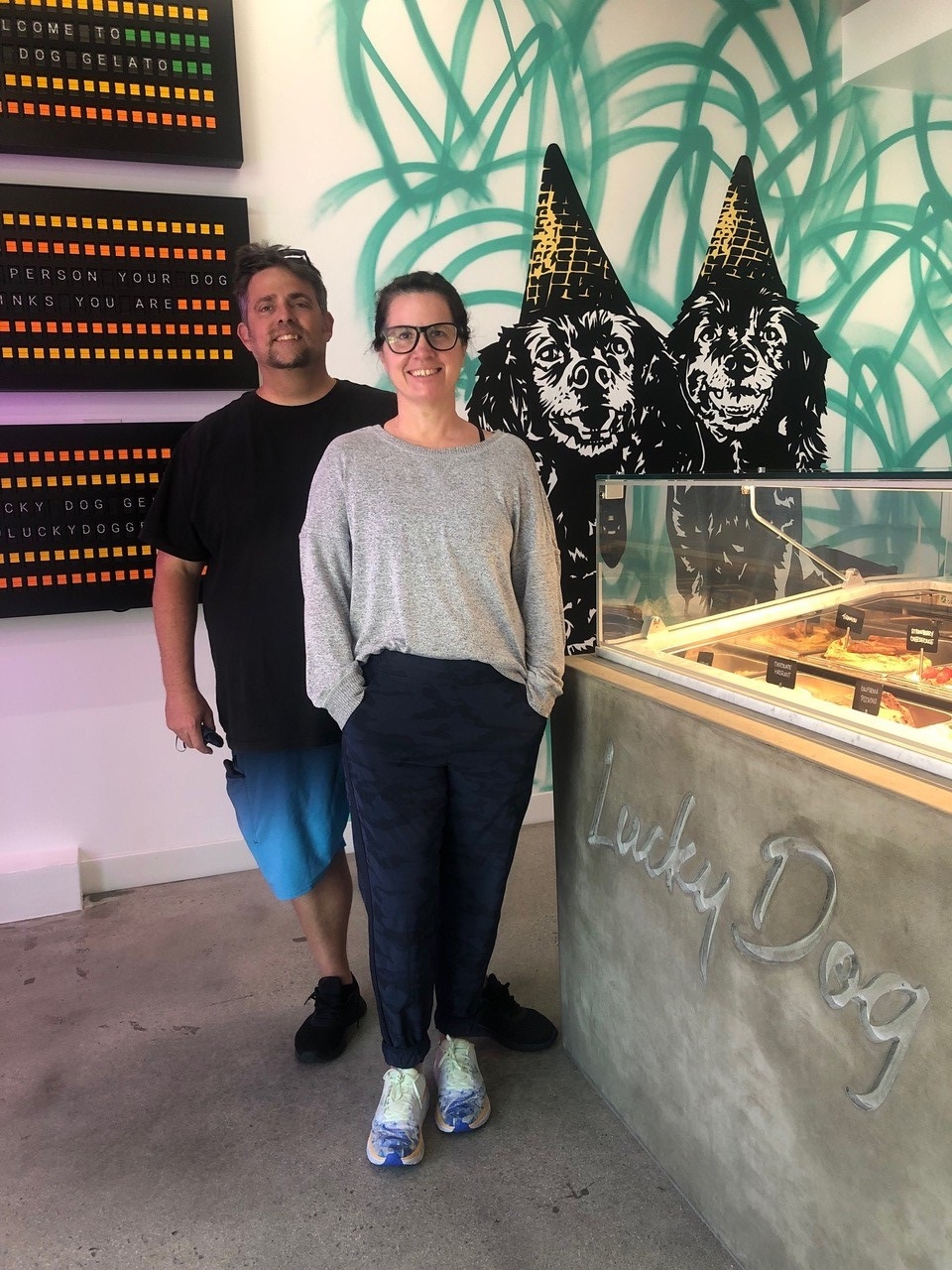 Starting a gelato ice cream shop “is something I’ve wanted to do for a long time, for at least 15 years,” said the native New Yorker, who has worked professionally in retail design for Gap, Inc, Walmart and Luxottica. “There was this great gelato and coffee shop in the Village (in New York City), and my friends, and I always noticed everyone in line—either entering or leaving—was smiling. I decided then that someday I wanted to own my own gelato shop and café.”

Brady was working for Walmart at the time as part of the company’s newly formed visual marketing team, splitting time between New York City and the company’s headquarters in Bentonville, Arkansas.

In 2014, she met Dustin and decided to move to his home state of California, where she landed a marketing job at Oakley. In 2017, she was laid off as part of sweeping cuts at the global eyewear company, and after spending her entire professional career working in corporate America, she was ready to pursue her dream and jump into the entrepreneurial world.

“I was at a crossroads and didn’t want to go back to the corporate world,” said Noel, a 20-year breast cancer survivor. “I thought about everything; I told my husband what I wanted to do, and he said, ‘Do something about it; make a plan.’ ”

She immediately started researching what it would take to learn how to make authentic gelato and found a school in Italy, Carpigiani Gelato University, where she went to study for four weeks in the summer of 2017.

Armed with her new knowledge, she made her first batch of gelato and entered a gelato contest in Santa Barbara, where she won the “Technical Jury Award” for her “Ode to Autumn” gelato, an all-natural mix of cranberry, pear, apple and ginger.

Inspired by her success, she went back to Italy the following two summers, first training with world-renowned chef Vetulio Bondi in Florence.

“I was interested in making all-natural gelato, and he helped me go further with understanding the art of gelato-making,” she said.

She entered and won awards in two more contests—one in California, the other in New York—with her Mango/Passion Fruit and New York Strawberry Cheesecake gelatos earning recognition.

So, in 2019, she determined it was time to launch the business. She and Dustin began researching locations in San Clemente and settled on a new retail space in the new Ten10 Santiago building.

Next up was deciding what to name their new business. Lucky Dog Gelato is named for the couple’s beloved 13-year-old Cocker Spaniel-Dachshunds, Darcy and Bingley—siblings that Noel rescued from a dog shelter while living in Arkansas.

“We came up with the name one day at home when we were sitting on the couch,” said Dustin, a native San Clementean who grew up working at San Clemente Cyclery and now works for Shimano. “The dogs looked up at us, and I thought, ‘These dogs are so honest, fun, loving, and they make you happy. That’s what the gelato shop is all about.’ ”

They agreed on “Lucky Dog Gelato,” and the shop features a large wall mural of their dogs. They’ve partnered with the local Pet Project Foundation and San Clemente/Dana Point Animal Shelter, and sell leashes and bowls to benefit the charities. They even offer a special gelato just for dogs.

Lucky Dog Gelato offers a range of homemade gelato and sorbet flavors, including vegan flavors. By crafting and tuning each recipe, to the 95% organic ingredients used, Noel is confident her gelato will bring a smile to your face.

“On any given day, we have up to 20 different flavors, and we plan on introducing one new gelato and sorbet flavor each week,” said Noel. “The customers have been really great so far, especially everyone in our neighborhood. They really want to see us succeed.”

The brand-new, ultra-modern, 900-square-foot gelato shop is open Tuesday-Wednesday from 3-9 p.m., and Thursday-Sunday from noon-9 p.m.