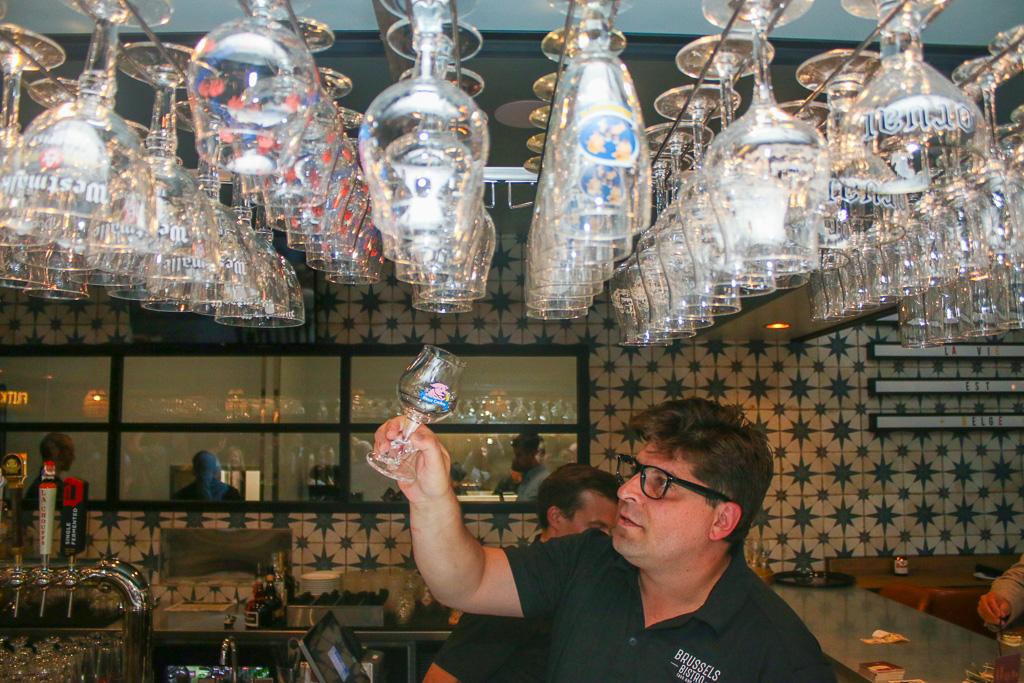 Belgian cuisine has come to Avenida Del Mar, ushering in the latest in international dining. All beers featured at Brussels are all Belgian, served in the traditional glasses of their makers.

Owner Nicolas Servais said he and his business partner, head chef Thomas Crijns, are passionate about their homeland’s food. The two have known each other for about 40 years, and Crijns moved to the U.S. about 14 years ago.

“We wanted to sell our culture to the American people, especially in California,” Servais said. “We first opened (a bistro) in Laguna Beach and the second one in San Clemente, because they’re not too far apart. We love the vibe of the city of San Clemente, and I think Brussels Bistro is also a good fit for downtown.”

The newest restaurant in San Clemente, Brussels Bistro, was packed on Thursday, Feb. 7, during its soft opening. Photo: Eric Heinz

The restaurant has a little cultural influence; a black-and-white marquee wraps around the top of the bar as part of the American touch along with Spanish tiles to reflect San Clemente’s style.

“We worked with a Belgian designer; this was the American touch of the restaurant, but we try to make it as Belgian as possible,” Servais said.
Moules-frites (mussels and fries) are one of the most popular dishes at his Laguna Beach restaurant, Servais said.

“And, of course, the beers, waffles and the chocolate,” he said.

Brussels is leasing the building from Alex Haynes, Jr.

Brussels Bistro in San Clemente is slated to be open seven days a week from 10 a.m. to 10 or 11 p.m. in the evening and possibly later on weekends. There will be a brunch menu on Sundays. Details will be finalized in the near future.

Alice P. Moran, D.M.D. Periodontist, recently announced the addition of the practice’s new associate, Dr. Hamilton Le, D.M.D., F.A.C.P. A native of Southern California, Le graduated from the University of California at Berkeley and spent several years in Boston, receiving his doctorate in dental medicine as well as a certificate of advanced prosthodontic training from Tufts University School of Dental Medicine, according to a press release from the practice.

“Immediately following completion of his prosthetic training, Dr. Le was granted with Diplomate status by the American Board of Prosthodontics for successfully completing his certification. He then returned to Southern California to begin his career in prosthodontics with a focus on multidisciplinary treatment planning for patients requiring removable, fixed and implant prosthodontics.

From 2013-2015, Le was president of the American College of Prosthodontists (ACP) California Section and is the current Chairman of the ACP Private Practice Committee. In 2014, Le was inducted as a fellow of the Pierre Fauchard Academy, an international honorary dental organization.

“Le strives to provide an open communication with patients in an effort to keep them a member of the treatment team,” the release stated. “Applying the latest developments in dentistry and prosthodontics, Dr. Le will work with you to develop, plan and engineer your treatment, in an effort to maintain your oral health, function and esthetics.”