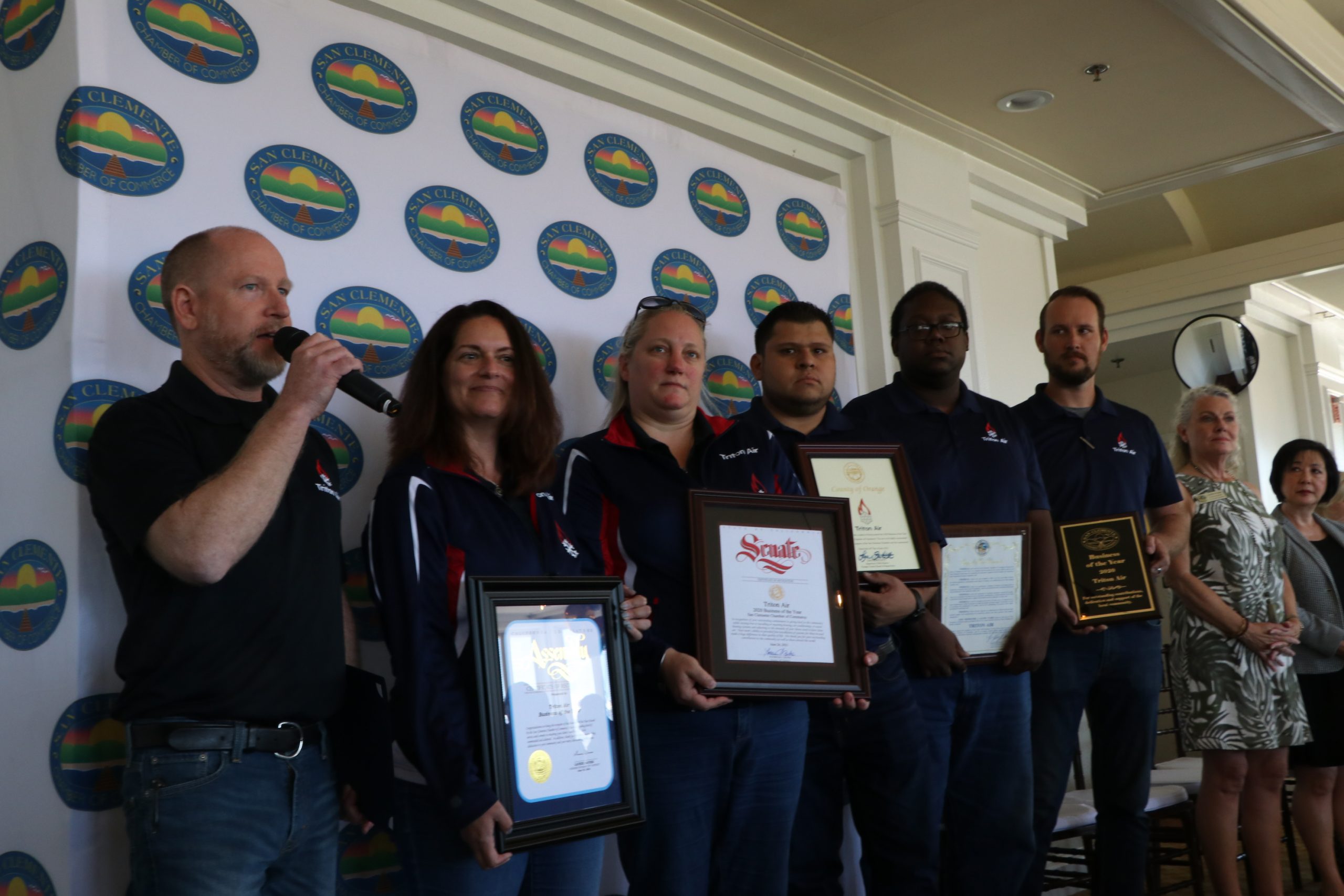 In another sign that life is getting back to “business as usual,” the San Clemente Chamber of Commerce met with local dignitaries and elected officials on Thursday afternoon, June 24, for its annual awards ceremony to recognize various business leaders and community members.

The annual event, a luncheon, this year, at Bella Collina San Clemente, gathered the business community to also formally install the Chamber’s officers and board directors for 2021, including new chairperson Jim Wynne who’s replacing Burton Brown.

“Our efforts have and will continue to focus on economic drivers for our local economy, including advocacy efforts, helping create jobs … and making San Clemente a more competitive place to do business today and in the future,” Brown, the outgoing chairperson, said during the lunch.

“I do not believe any of the previous winners have done as much over as long a period of time to warrant this honor,” Chamber Vice-Chairperson Larry Rannals said, comparing Swegles to the 22 other Lifetime Achievement recipients.

“Over the last 50-plus years, there’s no one in this town who’s had more awareness of San Clemente’s historical growth, issues of concern, significant historical highlights, or its notable list of community characters,” Rannals continued.

Swegles, who proudly boasts that his residency in San Clemente is older than the 5 Freeway, has more than 50 years of journalism experience under his belt, reporting for the Daily Sun-Post and Orange County Register before writing his weekly CoastLines columns for the SC Times.

“He considered retirement but it just didn’t stick,” Rannals said of Swegles after the Sun-Post went out of business. “You can’t keep a good beat reporter sidelined when the call of this business is in your blood.”

SC Times Publisher Norb Garrett accepted the award for Swegles who was unavailable to attend the ceremony.

“As most of you know, Fred is not great with public acknowledgement, he’s not a big fan of any sort of hubbub in his name,” Garrett said, adding, “He wanted me to share with you that he’s obviously humbled, flattered, (and) he loves this community more than anything.”

“He’s such an encyclopedia, just a wonderful human being and he would be here if he could be, then again he wouldn’t be because he doesn’t like getting any awards,” Garrett later concluded, garnering laughs from the audience.

Other individual awards also recognized Citizen of the Year, Volunteer of the Year and Ambassador of the Year. Those, respectively, went to Vicky Wilson, owner and manager of Tax Pros San Clemente; Karlena Rannals; and Isaac Camacho of Accurate Termite and Pest Control.

The San Clemente Downtown Business Association earned the Chamber’s Nonprofit of the Year for 2020.

This year’s Business of the Year honors went to the family-owned and operated Triton Air, a heating and air conditioning company that supports various charitable organizations including Family Assistance Ministries, and the Pancreatic Cancer Action Network.

“The cause nearest and dearest to the company’s heart is an organization in Malawi, (Africa), which provides medical support and transportation for expectant mothers,” Wynne explained.

“It’s interesting,” he added, before presenting the award to the Triton Air team including owners Mike and Kim Nicolai, “that this is a service company and they take a whole new name to the word service, not only serving customers, but their community.”

For the Chamber’s Educator of the Year award, San Clemente High Principal got to present the honors Marc Popovich, a social sciences teacher and basketball coach, who grew up in San Clemente and is an SC High alumnus.

“Popovich,” Carter said, “is a lifelong Triton and resident of San Clemente High School. He truly bleeds red and black. He graduated San Clemente High in 1998 and left a legacy of involvement from athletics to ASB to newspaper.”

Since 2006, when Popovich got a job teaching at SC High, “he has continued to have a positive impact and presence as a teacher, a coach and a voice of the Tritons,” Carter added. “As a teacher, Mr. Popovich can do it all … he connects with students wherever they are at and he dedicates his time to inspire and motivate.”