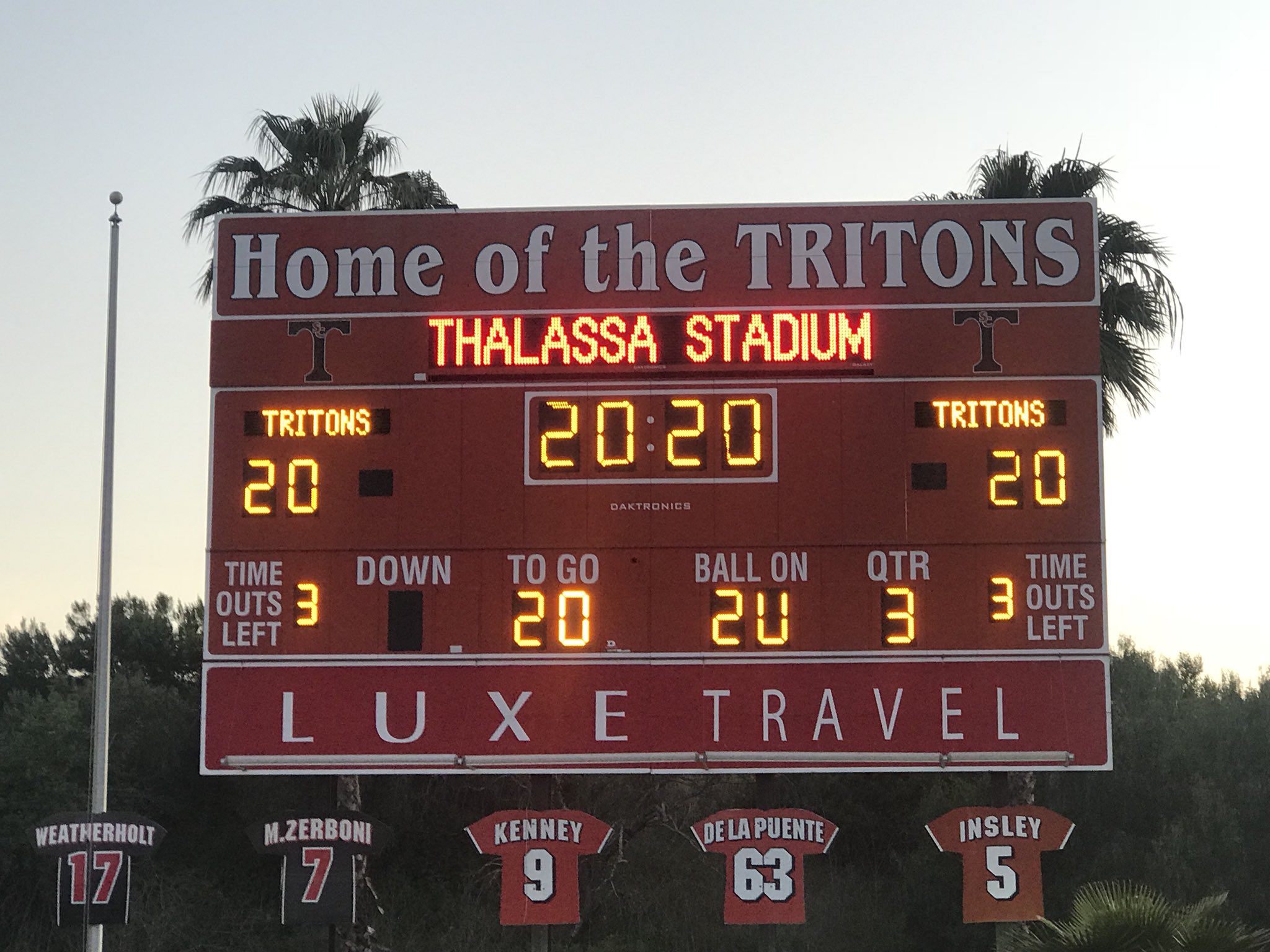 Calling Audibles: When Spring Football Should be Starting, Tritons Adjust to Distance Training

Monday, May 4 should have been the first major step forward in the 2020 high school football calendar.

Spring football was scheduled to start at San Clemente High School and on many campuses across Southern California. However, due to the coronavirus pandemic, school campuses remain closed, and all school activities remain canceled.

“During normal times, spring ball gives you an indicator of what you have as a team,” San Clemente football coach Jaime Ortiz said. “Sophomores that could be potential starters. Juniors, soon to be seniors, get the time to establish themselves as leaders. You install schemes: offense, defense, special teams. It gives you a small taste of what you expect in August.”

But that hands-on, on-field implementation is gone, at least for the moment.

In its place, like the players do for their schoolwork now and like nearly every workplace in the country has transitioned to, the Tritons have turned to video chats and conferences. Playbooks have been turned into PowerPoint presentations, and team meetings are now Zoom conference calls.

“The biggest thing for me is the players are healthy and continuing their schoolwork,” Ortiz said. “They’re getting more quality family time than they could have expected. I asked our coaches in our very first meeting to check in on them, see how they’re doing physically and mentally and then talk about football.”

While not ideal, Ortiz said the staff has embraced the switch to technology and could even see the regular Sunday meetings during the season switch over to these video conferences. However, none of that replaces that person-to-person interaction, and Ortiz hopes this quarantine reinforces the importance of those connections when he and his players and staff reach the other side of this.

Still, Ortiz and the Tritons are playing the cards they and everyone else have been dealt.

Ortiz and his staff have created workouts the players can complete at home, whether the players are lucky enough to have weights at home or not. Some video challenges have been put together on social media, including players and coaches conquering runs up local hills.

The Tritons are also keeping sharp and informed through technology. Ortiz showed his players a 20-minute interview that former Triton and current New York Jets quarterback Sam Darnold did with a New Jersey doctor regarding COVID-19, then gave the players a quiz on it.

The fun doesn’t stop there on social media for the Tritons.

With the in-person and on-campus visits stopped due to the coronavirus, college recruiting has moved to a mostly online basis, and a lot of that shines through on social media.

Players contact coaches on social media, post their own workout and highlight videos and post their announcements of new offers. Ortiz said it is proactive on the player’s part, and he also contributes by reaching out to his database of coaches with presentations and information on all of his players.

In particular, the offers have rolled in for juniors Cole Batson, Bentley Redden and James Bohls.

Batson has nearly 20 offers, including Arizona, Washington State, Maryland, Boston College, San Diego State, Fresno State and a handful of Ivy League schools, among others. Batson is 6-foot-4, 195 pounds and holds a 3.9 GPA. Last season as a wide receiver and safety, Batson caught 26 passes for 249 yards and four touchdowns and also pulled in two interceptions.

Redden has at least 15 offers, including Tennessee, Arizona State, Nebraska, Kansas, Washington State, UNLV and nearly every Ivy League school, among others. Redden is 6-foot-5, 220 pounds and boasts a 4.33 GPA. Last season as a tight end and linebacker, Redden caught eight passes for 96 yards and a touchdown and added 36 tackles with six sacks.

Bohls has at least 10 offers, including Boise State, San Diego State, Washington State and UNLV, among others. Bohls is 6-foot-1, 210 pounds and is a speedster with an 11-second 100-meter dash time. Last season as a running back, Bohls carried the ball 120 times for 677 yards and nine touchdowns and caught 10 passes for 90 yards.

Those three, and many others, might have the opportunity to increase their college stock when or if a season is played in the fall. The CIF-SS has said it is committed to playing its fall sports season, whether that’s as scheduled in August and September or delayed in October or November. Things such as the summer schedules still have to be worked out as well, but Ortiz is confident in playing in the fall.

“It could start right on time, if not August 1, then September 1,” Ortiz said. “I truly believe we’ll have a football season. Will it be the full 10 games? Will it be 7 games? We can only control what we can control.”

In Ortiz’s control now, like so many, is the schooling of his three kids and taking the time to get physical activity outside where and when he can.

Until told otherwise, the Tritons continue to prepare how they can for a much anticipated return to the football field.