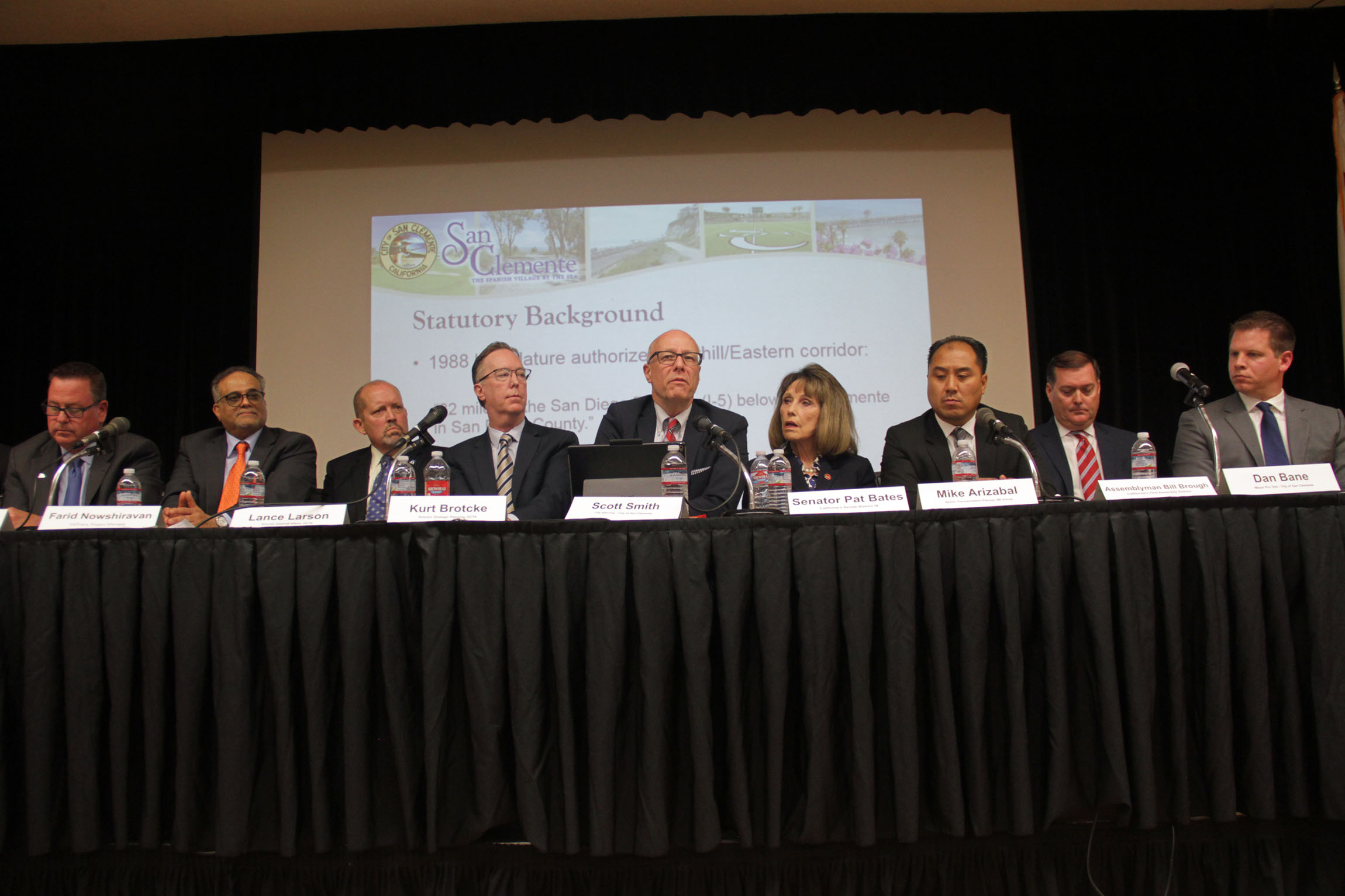 The initial stages of the environmental process to study the proposed 241 Toll Road extensions through San Clemente and parts of San Juan Capistrano are officially underway, as Caltrans last week began to accept public comment and review of the South County Traffic Relief Effort.

“The purpose of this town hall is to provide information. The Toll Road is a community issue that is paramount,” said acting Mayor Dan Bane, who moderated the panel. “As a council, we’ve been working on a lot of issues … We want to let you know where we’re at in the process.”

On Friday, Nov. 8, Caltrans, in coordination with the Foothill/Eastern Transportation Corridor Agency (F/ETCA)—part of the TCA—submitted the Notice of Preparation/Notice of Intent and announced a pair of public scoping meetings for Nov. 20 and Dec. 4.

The Relief Effort, which includes a series of proposed routes—some of which intend to extend the 241 through San Clemente and connect to the I-5 Freeway while another is to extend Crown Valley Parkway to the 241—are intended to “improve north-south regional mobility in South Orange County and accommodate regional travel demand,” according to Caltrans.

Initially, there was a total of 24 overall ideas for the project, but those have been narrowed-down to 11 alternative proposals—including a no-build option—all of which will eventually go through environmental and engineering studies.

The proposed options that could potentially impact San Clemente and San Juan include alternatives 13, 14, 17, 21, 22 and 23.

Alternative 13 would have the 241 extension come down through San Juan and cut west to connect to the I-5.

Alternative 17 would similarly have the 241 travel down through San Juan and continue south into San Clemente, connecting to the I-5 through Shorecliffs.

Alternative 14 is proposed to extend down near the western border of Rancho Mission Viejo, cross over La Pata and join the freeway by Avenida Pico.

Alternative 21 comprises two separate roadway segments, with the first one extending Los Patrones Parkway from Cow Camp Road to Avenida La Pata. “The second segment would provide a median-to-median, high-occupancy toll (HOT) lane connector from SR 73 to I-5,” according to Relief Effort.

Alternative 22, a road alignment plan that Orange County Board Supervisor and Chairperson Lisa Bartlett proposed, would connect the new Los Patrones Parkway from Cow Camp Road to Avenida La Pata, running along the east side of the Prima Deschecha Landfill.

Alternative 23, which has a few potential components to it, would extend the managed lanes—High Occupancy Toll lanes and High Occupancy Vehicle lanes—on the I-5, from Pico to the Basilone Road interchange.

“Is there any possibility some of these ideas are just too stupid to consider studying?” Bane asked.

Mike Chesney, TCA Strategic Officer, said that because the agencies were in the formal California Environmental Quality Act process, options could not be removed and that each alternative would still need to be studied.

A concern that OCTA has expressed are potential conflicts the alternative routes have with Measure M-funded projects.

TCA states the agency is keenly aware of the recently completed and ongoing Measure M projects along I-5 in South Orange County and respects OCTA’s Measure M commitments.

“Given the planning year horizon of 2050 and the regional nature of the project, we believe it is important to consider alternatives on the I-5, as well as alternatives which provide an extension of the SR-241,” the TCA has said in a previous statement.

The public scoping period was initially set for Nov. 8 through Dec. 9. Bane urged Caltrans and the TCA to extend the 30-day scoping period to 90 days, considering the holiday season could deter input. Based on input received, TCA and Caltrans have agreed to extend the comment period for a total comment period of 60 days, according to Sarah King, a spokesperson for TCA.

“The scoping period kicks off the formal environmental review phase of the SCTRE, which will consider traffic data, community issues and environmental impacts of every alternative that advances to the technical studies portion of the PA/ED phase of the process,” according to a statement that followed the town hall event.

Members of the public can submit comments to Caltrans via email at scoping@sctre.org or in person at one of two public meetings: on Nov. 20 at the Norman P. Murray Community Center in Mission Viejo and on Dec. 4 at the Ocean Institute.

Comments can also be mailed directly to Caltrans. Both public scoping meetings are in an open house format and will run from 5-8 p.m. Information about the SCTRE, including a map of the proposed alternatives, the preliminary scoping report, an overview video and Caltrans’ mailing address, is available at sctre.org.