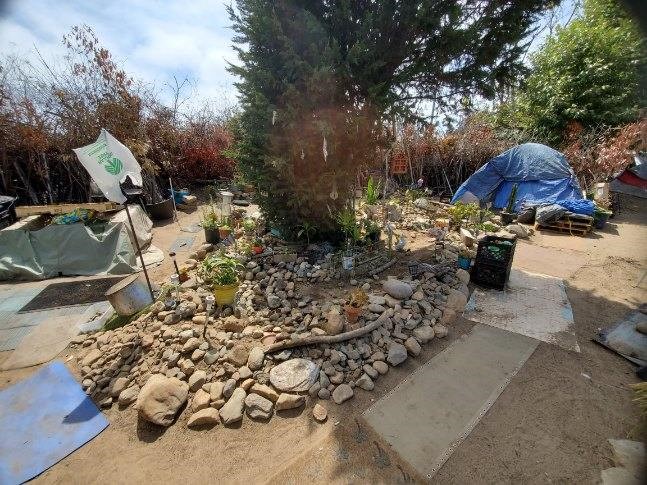 For the past year, nearly two dozen of the city’s homeless have found stable shelter at an encampment tucked away on the south end of town, just past the city limit, where they’ve created a small community of individuals who have looked out for one another.

The “out of sight and out of mind” mentality of the encampment has allowed those living there to feel safer than they would if they had to sleep on the side of a street among gawkers’ prying eyes and law enforcement.

“I’ve been here for a year,” said one female camper who spoke on the condition of anonymity. “I haven’t been harassed, we haven’t gotten ticketed and getting kicked out and having the public taking pictures of you and yelling things at you. So, yeah, I guess it is safe.”

A male camper, who also asked to remain anonymous, said the stability of having a place where he could rest his head at night and safely leave his belongings during the day has allowed him to maintain a job in town, where he works multiple days a week.

“To be able to come home … it’s a really special thing; as soon as I get here, I go, ‘Yes, it feels good to be home,’ and I like my neighbors, and we don’t have a lot; but if someone doesn’t have something, we figure out a way to make sure that they have something,” he said. “This is the closest I’ve had to family—in terms of, I don’t talk to my family.”

Speaking with San Clemente Times last week, Maura Mikulec, a homeless advocate, estimates that about two-thirds of the homeless who have found refuge at the encampment had been among the individuals who stayed at the city’s temporary encampment off Avenida Pico, back in 2019.

“These folks are there, because, really, to avoid harassment by residents, as well as law enforcement,” Mikulec said. She added, “This has become a place where they could feel safe and out of the way from those activities.”

The encampment, which sits on a California Department of Transportation right of way within San Diego County, would occasionally see visits from state transportation officials offering to discard any trash the campers had. So, it came as a surprise to those living there when a July 9 notice from the department ordered them to vacate the area by the end of last week.

“I was so scared,” the female camper, who grew up in San Clemente, said of her initial reaction to the notice. “I was like, ‘Aaahhh, what am I going to do?’

“I mean, my son is gone,” she added, explaining that her son would often check in on her at the encampment before he recently relocated out of state.

Initially, the transportation department, or Caltrans, was scheduled to conduct the encampment sweep on Friday, July 16; however, it granted an extension, giving the individuals until mid-August to vacate.

“Community is so important, so when these encampments get broken up, it’s known to put people at risk,” Mikulec said. “There’s all kinds of reasons people are together. It’s safer. “

In an emailed statement from Caltrans on Tuesday, July 20, the department cited a fire threat behind the decision to proceed with the cleanup. It also noted that COVID-related guidelines from the Centers for Disease Control and Prevention allow Caltrans to conduct encampment sweeps “if there is an immediate safety concern or threat to critical infrastructure.”

Since Caltrans’ July 9 notice, homeless advocates including Mikulec have called on state and local leaders to intervene, advocating for the county and city to send service providers to the encampment, where they can connect the individuals to opportunities for resources and shelter.

“Our hope, my hope, as an advocacy group in the coming weeks, is the county and the local service providers will be reaching out to people in the camp, to include them and offer them the same opportunities that would be offered to anyone else in town,” said Mikulec.

Touching on the “out of sight and out of mind” aspect of the encampment, Mikulec said it’s become a double-edged sword. Though they’re out of the way, she explained, they’ve also been ignored by outreach efforts.

“They (outreach workers) don’t come down here,” Mikulec said. “These people have been forgotten, which is a double-edged sword, because that’s part of why they’re here, so they won’t get harassed constantly by law enforcement.”

Caltrans, in its prepared statement, said it would work with local officials and stakeholders to find alternatives, or “safer situations,” to those who are soon to be displaced by the encampment sweep.

“The department also continues to work with local agencies to provide those living in the encampments with resources for safer living situations as available in an effort to keep the individuals and the freeways safe,” the transportation department said.

During a routine homelessness update to the city council on Tuesday night, City Manager Erik Sund noted the advocates’ concerns over a lack of outreach at the encampment, saying both San Diego County and Orange County would be working with Caltrans to offer resources.

“I’m led to believe that within the next couple of weeks,” he continued, “they’ll be doing the evictions but will be providing ample services up to that point as part of that cleanup.”

Pauline Colvin, communications advisor for Orange County Board Supervisor Lisa Bartlett’s office, echoed those sentiments this week, stating that the two counties have collaboratively been working to coordinate efforts and distinguish what services are needed.

According to a copy of the vacate notice, Caltrans listed two violations: “unlawful camping or lodging” and littering on a state right of way. The notice also warned that any personal property left behind would be considered abandoned.

As part of a settlement agreement, in which Caltrans was to set aside $1.3 million to cover claims of property destruction, the department must also now give at least 48 hours’ notice of a sweep. The notice must also include a phone number to call about retrieving property.

“Personal property needs to be determined as a health hazard, and if it’s not, then it needs to be stored (and) labeled for 60 days,” Larson explained, later adding: “If Caltrans does violate any of these sweeps that occur, then there’s recourse within the settlement agreement to report violations.”

Asked for her insight on Caltrans’ notice to the encampment sweep here in the San Clemente area, Larson noted that “community-based responses tend to be the most powerful tools to get sweeps postponed and ensuring that whatever government agency is doing the sweep follows policy.”

“It seems like there’s some great group of advocates down in Orange County dedicated to that,” Larson added.