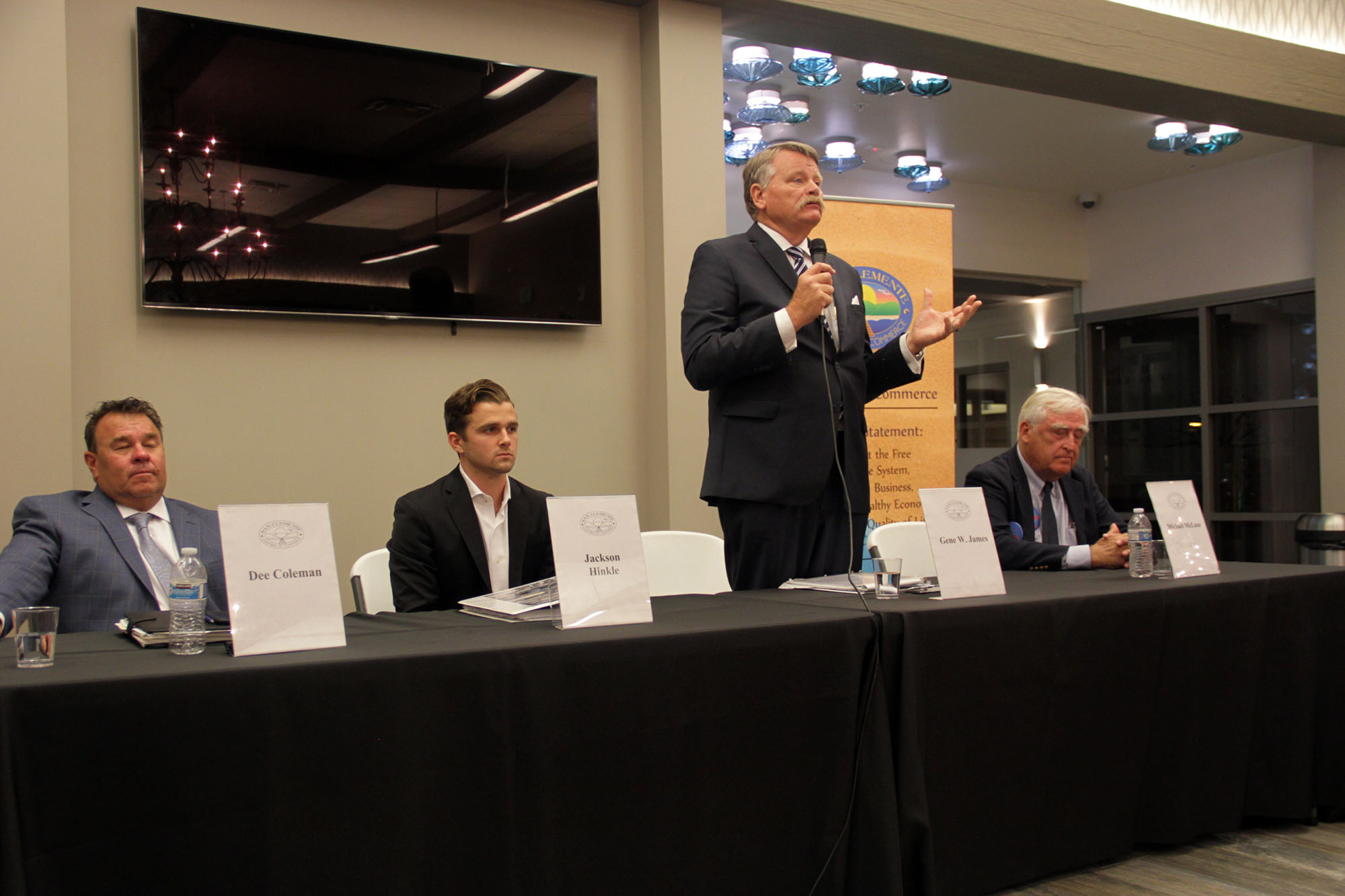 City council candidates running in San Clemente’s special election touted their plans to be business-friendly on Thursday, Sept. 26, when they met for a forum hosted by the Chamber of Commerce.

Highlighting their track records as leaders of various companies and organizations, the candidates used the latest campaign event at the Outlets at San Clemente to cement their pro-business positions.

Christina Selter was absent from the latest Q&A session due to illness, Chamber board member James Wynne announced at the outset of the forum. Selter had also missed the San Clemente Historical Society’s forum at the community center on Sept. 15, as a family emergency came up.

“What does the free enterprise system mean to you?” Wynne asked of the candidates, leading off the forum.

Hinkle, the first candidate selected to respond, said the “free enterprise system here, especially in San Clemente, means every single business has the opportunity to succeed” and added that San Clemente’s small businesses are the backbone of the community.

McLane, who noted that he’s had four successful businesses, is “a big fan of business,” as he’s studied business in college and graduate school. He added that he’s pro-business and would consider the Chamber of Commerce a partner to the city council.

“I’ve always considered the Chamber of Commerce sort of a partner of politics of a city,” McLane said.

The Chamber, Coleman said, is important to businesses in a city because “if your city has good business, then your city will grow, and it’ll grow in a good way.” Citing his personal experience as a business owner, he added that he’s responsible for identifying trends and solutions, and then “put them into action.”

For James, who proposed creating a business commission if he’s elected to the council, “the free enterprise system means everything” to him.

James then issued a stark warning against socialism.

When asked to describe how their professional life and experiences will prepare them for being a city councilmember, each offered varied responses that all touched on their history of leadership in some way.

McLane said his background as a law enforcement officer and a businessman has prepared him for a role on the council. He also noted that the city is dealing with a lot of incivility, specifically over the homeless issue, and needs strong leadership on the council to resolve it.

“(Homelessness) is the biggest issue that we face, and I believe that it takes very strong leadership to deal with it,” McLane said.

Coleman boasted that “ever since I was young, I’ve been a bit of an entrepreneur” and, as a businessman, has overseen big budgets and dealt with large communities, developments and contracts.

“I want to run the city like a business, because I’m not a politician,” he said. “I’m a businessman, and that’s what this city needs; it needs accountability, it needs fiscal accountability.”

James said that his 20 years of leadership in the U.S. Army and 20 years of holding senior management roles in Fortune 500 companies are what’s prepared him for the city council seat. He also noted that he’s an adjunct professor, has held leadership positions on the boards of national nonprofit organizations and currently sits on the board of governors for the USO.

“What I’m saying is, I am the guy who’s coming it with both a governance perspective, being on the board of governors, a management perspective, and an academic perspective, in leadership,” James said.

Citing his background as a young activist, Hinkle said that he’s been heavily involved in key efforts to help the local community. Such efforts, he noted, include leading the push to get solar panels in San Clemente High School’s parking lot and demonstrating against the Transportation Corridor Agencies’ plan to extend the 241 Toll Road through San Clemente.

“I myself have had a great deal of success with my projects and the companies that I have worked with and worked for,” Hinkle said, adding, “When we talk about experience, we should not only note about the things that we’ve done outside of our community but what have you done for our community.”

The Shorecliffs Terrace HOA will host another candidate forum on Thursday, Oct. 10, from 6-9 p.m. at 3000 Calle Nuevo, San Clemente.