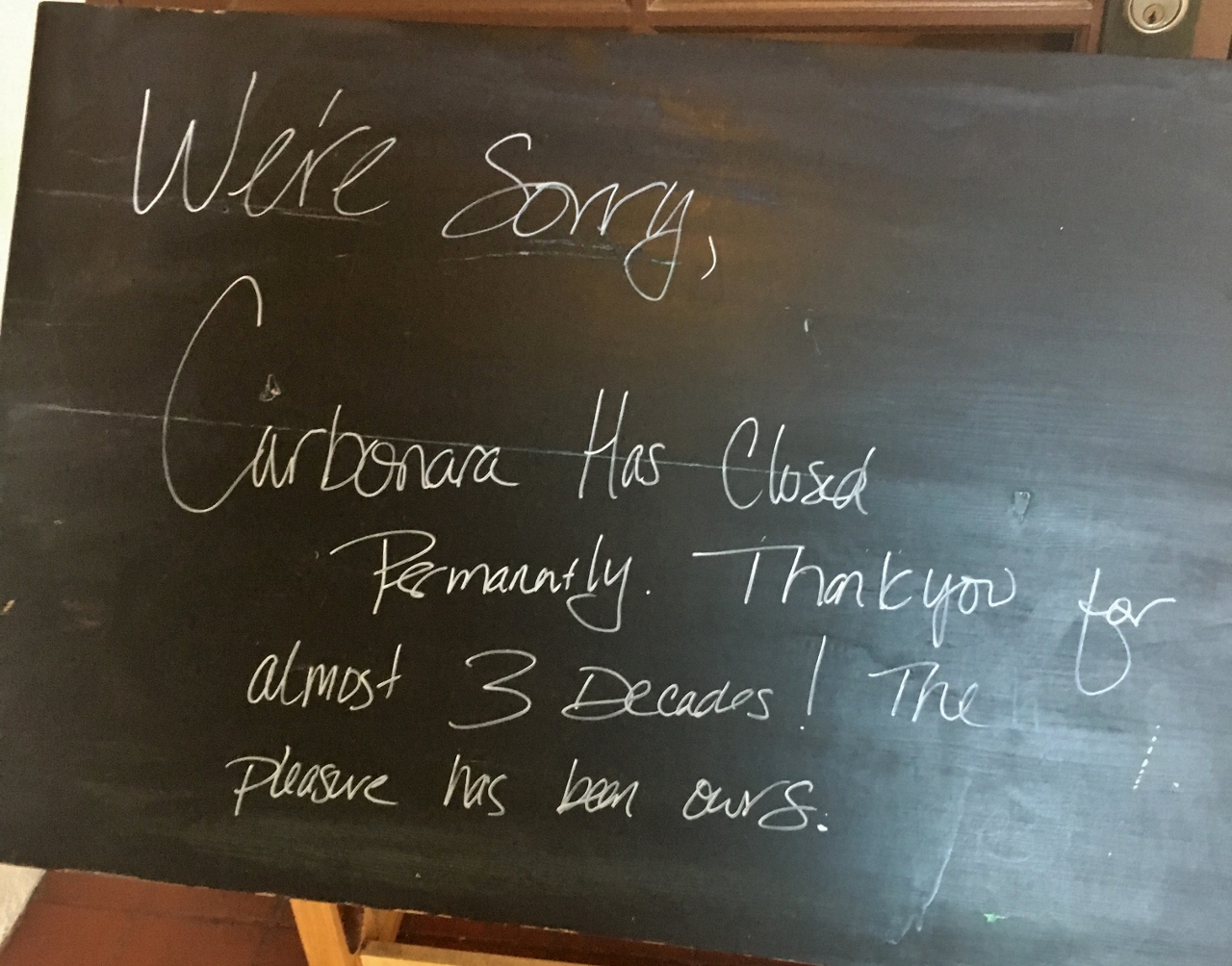 On Thursday, April 27, Carbonara Restaurant, known more casually as “Carbonara’s,” announced on its website and on a sign in front of the restaurant that it had closed.

A new restaurant, expected to be named 111 Coastal, is planned be established in its place, owners told the San Clemente Times.
Carbonara’s has been a staple in the San Clemente community for nearly 30 years. It opened in 1989 and was a hub for local gatherings and meetings, according to people close to the original owner.

Tony Carbonara, the founder of the Italian restaurant, died in 2013, and with him so did the atmosphere of what the business once was, some people who were close to Tony said.

Justin Rider, the president of 111 Coastal, has partnered with Rocco Carbonara, the nephew of Tony, to make changes to the restaurant.

Regarding the loss of Tony, “I compare it to when a church loses a pastor, and it takes a long time to get through,” Rider said. “He was the lifeblood of the town, and when he was gone…it started the clock for that previous business. (Under the name Carbonara’s) we had some huge shoes to fill.”

Rick Anderson, former owner of Casa Tropicana, worked closely with Tony when the city was trying to revamp the Pier Bowl and Avenida Del Mar.

“Even though the food was great, we didn’t go there for Italian food; we went there for Tony and Mary, Tony’s wife,” Anderson said. “(Tony) was always just a friendly and amenable light when you were in his presence, and I don’t know if a lot of people melted away (from the business) or missed Tony too much.”

Rider said the new restaurant is an opportunity to make a fresh contribution to San Clemente. He said he and his business partners are making efforts that follow Tony’s own legacy. Rider said they have started to make contributions to the city wanting to sponsor the San Clemente High School football team, Casa Romantica, tutoring junior college students in math and science as well as other charitable entities.

Not everyone close to the situation is thrilled with the name and concept change.

Christina Carbonara, daughter of Tony, said she is sad to see the name go and that it was the last physical legacy of her father.

“The restaurant was definitely difficult to run without dad, and mom needed to move on,” Christina said. “We had numerous offers (from people who wanted to buy it), but we decided to keep it in the family.”

Robert Novello, owner of The Fisherman’s Restaurant & Bar in San Clemente, was part of the effort to revitalize the Pier Bowl and Del Mar and worked with Tony. Novello said he was puzzled by the move, and that keeping the name could retain customers. He said his fondest memories of Carbonara’s were during community fundraising events at the restaurant.

Rider said he could not elaborate on what changes will come to the location, and the opening date is yet to be determined.

The Carbonara catering business will still continue along the same business model at this time, Rider said.

“I have a very deep connection to the city of San Clemente, and I’ve never run into a town like this,” Rider said, adding he was born at San Clemente’s general hospital when it operated. “I learned from the tradition and the legacy that Tony started and left behind, it’s
something that I’m taking very seriously going forward with the 111 concept. (The restaurant) is about honesty and being charitable and a town meeting place. That’s very much in the spirit of what we’re bringing.”

Despite the change and the loss of one of the city’s most popular meeting locations, Novello said he is eager to see what the future holds for 111 Coastal.