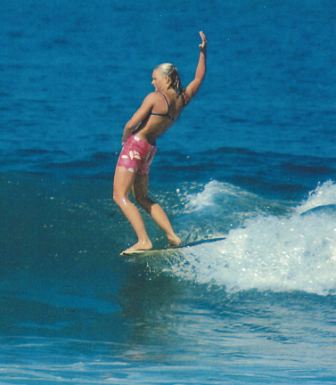 At the age of 12, Joyce Hoffman learned how to surf. By 13, she was competing in contests. By the time she turned 16, Hoffman had emerged as the budding sport’s bright new star.

From 1963 to 1971, Hoffman, a Capistrano Beach native, dominated women’s surfing competitions across the globe, cementing herself as a true legend and pioneer for a whole generation of surfers.

Between 1965 and 1967, Hoffman won three consecutive United States Surfing Championship titles and won her fourth title in 1971. She won the Women’s World Surfing title in 1966 and 1967. In 1964, Hoffman was the first woman to win the women’s division of the annual SURFER poll. She was the first surfer to be named Los Angeles Times Woman of the Year in 1965.

On May 21, Hoffman can add one more accolade to her list.

Hoffman will be inducted into the San Clemente Sports Wall of Fame this weekend, along with tennis player Doris Stephens and volleyball player Bob Yoder, at the Vista Hermosa Sports Park Aquatics Center at 6 p.m.. The Wall of Fame is in partnership with the Friends of San Clemente Foundation.

Hoffman’s stepfather, Walter Hoffman, was an accomplished big-wave surfer and introduced his teenage stepdaughter to the sport when the family moved to Capistrano Beach. The first time Joyce rode a wave in competition was with Walter in a tandem ride. However, Joyce did not like the fact that she was not in control of the board and was merely a passenger while Walter steered. From that point on, Hoffman was determined to be in total control out on the water.

Hoffman surfed up and down the Southern California coastline but called the breaks off San Clemente her home turf.

When she paddled out at San Onofre or the Pier as a 12-year-old girl, she was greeted with some sideways looks. Surfing was predominantly a male sport when Hoffman started out back in the 1960’s, and only a handful of women ever ventured into the water looking to ride waves.

Hoffman’s skills as a surfer quickly turned those looks into approving nods.

“As soon as you’d ride a few waves and they could see you knew what you were doing, (the surfers) became supportive and protective,” Hoffman recalled. “(The surfers) were real supportive of me when I was surfing. If any guy from out of town would come out and try to give me some vibes, (the locals) would be like, ‘Hey, don’t even go there. She’s one of us, she belongs here.’ It was really neat.”

The wins began to pile up for Hoffman as she toured the West Coast, earning victories in the Bay Area on down to San Diego. She would travel to Hawaii and at the age of 16, won the Makaha International Open, a landmark victory. Her professional career would take her across the globe, from Australia to Europe.

Hoffman devoted herself to the sport and particularly to fitness. She incorporated cross-training exercises like paddling, swimming and running into her training regimen, which she said kept her in top physical condition and gave her an edge in competition.

Now, Hoffman resides in San Juan Capistrano and runs the 25-acre Tar Farms Stables, which has been in the Hoffman family for years. She still paddles out in the Capo Beach area to catch a few waves, where she is usually joined by family out on the water.

“We all love the same thing. We love the water and we love the experience of it all,” Hoffman said. “It always feels like I’m at home because I’ve spent so much time doing it and it’s so integral to my family.”