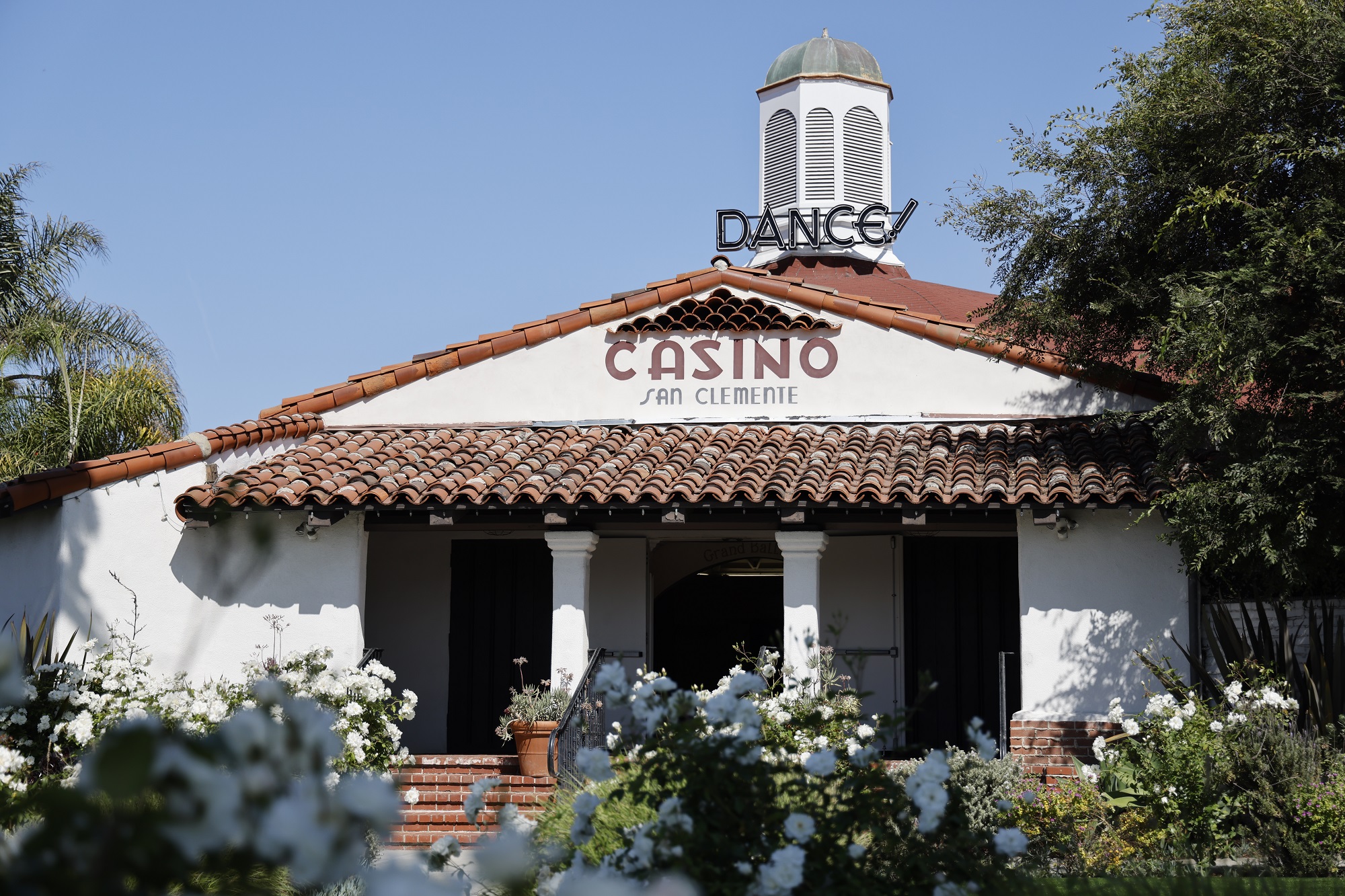 What used to be a favorite haunt of Hollywood’s elite in the first half of the 20th century found itself closed and in a dire state in the early 2000s.

The back area of the Casino San Clemente, now called the Rock Garden, was populated with 3-foot-high weeds, two-by-four plywood, scraps and beer bottles. The place obviously needed a little bit of love.

In July 2009, the road back to restoring the building to its former glory began when Linda Sadeghi and her ex-partner, Shaheen, bought the casino and initiated the yearslong renovation process.

Sadeghi, a born Michigander, studied design at the Pratt Institute in New York City before beginning her career and transitioning into commercial real estate. Along with Shaheen, the team would be responsible for developing the Anaheim Packing House and Costa Mesa’s The Lab into what they are.

They stumbled onto the Casino around 2009, while they were invited by the City of San Clemente to do a different project nearby that did not come to fruition. During the process of that project, Sadeghi came to love the historic North Beach area.

After she heard that the developer who owned the building at the time was looking to make the land into a residential area and “misuse” the landmark, the duo bought the property once the developer’s idea failed, with no clue of what the Casino would become under their ownership.

“Honestly, it’s by the locals coming in the front door, going, ‘I remember dinner theatre here,’ and ‘I remember crowning Miss San Clemente here,’ and all these incredible stories that I personally fell in love with the building and its history,” Sadeghi said. “So, now I manage the team, and we run the business ourselves.”

The Sadeghis did their due diligence in learning about the structure, which was built in 1937 and was a part of San Clemente founder Ole Hanson’s idea for a “recreational area” away from Los Angeles down the Pacific Coast Highway, in addition to the Beach Club and the Miramar Theater.

The San Clemente Historical Society also played a role in the renovation process, along with the city, which Sadeghi said gave her team plenty of hoops to jump through that added more time and cost, but overall were beneficial.

“It took us a while to figure out what to do with the building,” said Sadeghi. “My ex-partner and I just wanted to save the building, because it’s so iconic with the big dome ceiling, and if you go in the ballroom, (with) that wood ceiling, you just don’t see that anywhere anymore.”

They did a complete renovation of the venue, first with the goal of restoring it to the traditional, simplified nature of Spanish Colonial Revival architecture. During the process, however, the team realized that the Casino could serve as an “incredible private event venue,” leading the way toward becoming a venue to host weddings and other special events.

The restoration saw them remove nautical-themed windows from the ballroom walls, seal off an audiovisual room that was accessible from the dance floor, move the door to the dressing rooms away from center stage and to the side, rebuild the kitchen, and simplify the West Wing, which used to be the original restaurant inside the building.

They also carpeted the dance floor to give the space quality acoustics, converted the multiple dressing rooms into a green room and a room for brides-to-be, among other uses, and managed to save the original hardwood floors that make up the Historic Hall, where visitors can see pictures of all the Hollywood stars who formerly frequented the Casino.

In the back, they cleaned up the Rock Garden, put up string lights, and planted roses and olive trees, to give the space a garden feel that they use for wedding ceremonies and as a cocktail area for community events.

“The brides love it back here,” Sadeghi said.

She noted that there are more improvements to be made, as she works down the checklist of what she wants to accomplish.

Although Sadeghi and her ex-partner were in the business of developing, she hates using that word to describe her. She feels her background in design helps her come at the process from a nontraditional angle.

“I don’t know any other developer who says, ‘I needed to give that building love,’ ” Sadeghi said. “They don’t talk that way. But we just want to reflect (the) history of all the properties.”

The Sadeghis had never operated a venue like the Casino before, and it took trial and error for them to determine how to truly turn the building into a private event venue.

Given the landmark’s history in hosting live dancing and large bands in the 1930s and ’40s, as well as the site of dinner theatres and other entertainment from the ’70s until the ’90s, the team quickly figured out that it was possible to use the space to hold events pertaining to music.

Sadeghi’s love of jazz led her to start an underground jazz club five years ago that hosts musicians every other Thursday in the West Wing, and the Casino also presents jazz for Christmas, and Valentine’s Day.

The present-day’s events tie into the early days of the building, which was purposely constructed to feature dancing and live music that was nationally broadcasted on the radio at the time.

“It was a big deal to come down here and dance to big, live bands,” Sadeghi said. “There’s not many dance halls … I don’t know of any in Southern California.”

She added that the Casino started hosting weddings purely by accident.

People would come in asking to rent the space for an event, and as time went on, those events most often were weddings. With the abundance of square footage available, the Casino turned into a property that could host bridal parties, corporate events, nonprofit fundraisers, and celebrations of life.

“We just want to be an amenity for the community, whatever event that might be,” said Sadeghi.

The building has come a long way from what it was when Sadeghi first came in, when the “dark and dilapidated” space that had animals living in the ceiling made it a scary place to be. Sadeghi wants the Casino to be known as a happy place that puts a smile on people’s faces and makes them feel light-hearted when they walk inside.

Amid the continuing revitalization of the North Beach area, now a registered Historic District, she believes more people are realizing the area’s value.

Sadeghi feels she and her ex-partner were pioneers in the sense of first paying attention to the historical buildings down in North Beach, and now that the Casino is progressing toward what she calls its “original intention,” she’s having a lot of fun.

Part of the process of getting back to the building’s roots was a recent development that saw Sadeghi put up a neon “Dance” sign on the roof, harkening back to the days decades ago that a similar sign existed in the same spot. Sadeghi is especially looking forward to turning it on Saturday night, July 30, during the celebration dinner for the Casino’s 85th anniversary.

“I went through a lot of hassle and trouble and money to put that dance sign back on the ceiling, because I want people to know that’s what we were and that’s what we want to be,” she said.

She hopes the Casino can set itself apart by offering live music to the whole community and establishing a local following in a location that is intrinsically tied to San Clemente’s history.