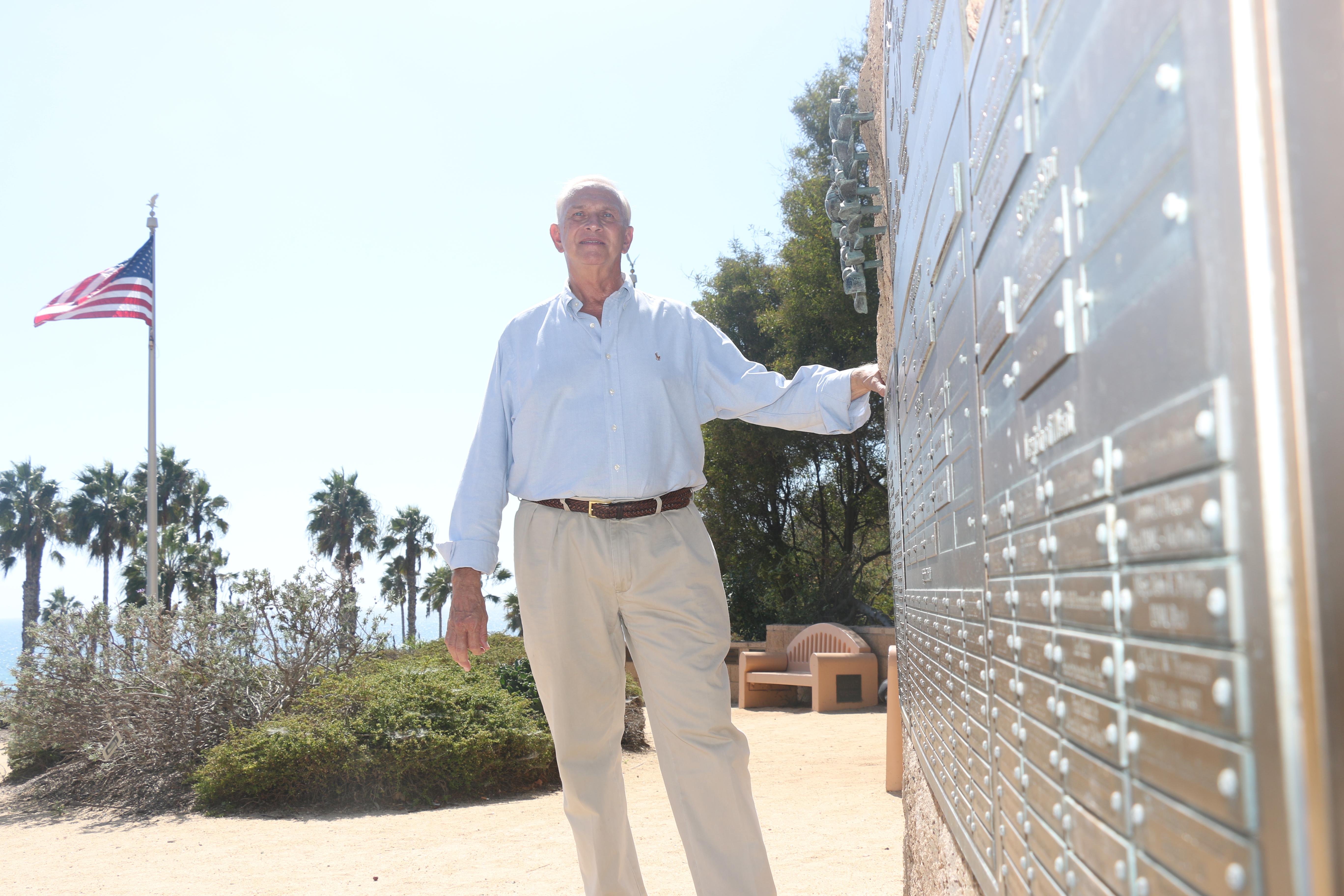 Wayne Eggleston carried a large, industrial leaf blower Sept. 23 to Park Semper Fi for maintenance, a chore he said he does almost every day.

Eggleston, the executive director of the Heritage of San Clemente Foundation, was instrumental in the creation of Park Semper Fi and he said his inspiration for bringing a park to the area came from the Marines themselves. The park also identifies members of the Navy and police officers.

“It’s kind of wonderful in San Clemente because we have several dozen organizations that do things for Marines. We don’t organize as one group; we’re separate groups that provide different things.” —Wayne Eggleston, executive director of the Heritage of San Clemente Foundation

“When I was in Washington, D.C. with a friend of mine, he was a Lieutenant Colonel at the time, we were walking around looking at all the monuments and he said we should do something like this for San Clemente,” Eggleston said.

The park is maintained by a group of volunteers. No dogs are allowed, but occasional debris finds its way up there. Eggleston said he comes to the park to do whatever tasks are needed, but someone from the foundation is at the park every day.

The city is in charge of maintaining the memorial wall and the trails throughout the park, as well as the irrigation system for the gardens. The wall has a list of donors to the park as well as plaques honoring Marines and Navy members.

It started with a small group of people who raised money to build the park. At the time, Eggleston was mayor pro tem and he said the land was vacant. Mostly it was used as a dog area or by the sheriff’s office for a watch area during large events at the beach.

“We looked all around for a site, and it was Col. Stewart Navarre and his wife, Yana, who were instrumental in helping get this off the ground,” he said. “I was at a party up there [pointing to the condominiums adjacent to the park] and talking to some people, and they suggested the location.”

The celebration at Park Semper Fi takes place at 2 p.m. Oct. 11 and is free to the public. Reservations for the festivities following the celebration at Casa Romantica, just up the hill from the park, are $45 per person and must be made by Oct. 7. More information can be found at www.marinemonument.com or call 949.498.4958. People can also sponsor a Marine on the website or send the donation to The Heritage of San Clemente Foundation, P.O. [/box]

Eggleston was never enlisted in military service, but he said he wanted to bring the park to San Clemente because of its deep-seeded relationship with Camp Pendleton Marine Base and other factions of the military.

The park was built shortly after the city adopted the 2nd Battalion, 4th Marines, known as the 2/4, as well as the HMLA 469.

“It’s kind of wonderful in San Clemente because we have several dozen organizations that do things for Marines,” Eggleston said. “We don’t organize as one group; we’re separate groups that provide different things.”

Some plans for additional condos and miscellaneous ideas had been suggested for the lot, but none came to fruition beyond that.  Eggleston said Tim Shaw at the city’s Planning Department helped a lot with the initial park plans.

“It’s the solitude of it. It’s an incredible park, coming up here at sunset,” Eggleston said. “It’s a magical place.”

The centerpiece of the park, the Marine Monument, was modeled after Sgt. Rob Elliot, a member of the Fifth Marines who was stationed at Camp Pendleton. Although it is made out of bronze, it is protected so it won’t gather patina.

“The mold of the statue was done, and Elliot was on deployment, and his wife went to take a look at the mold to inspect it,” Eggleston said. “She said it wouldn’t do, and when we asked why, she said, ‘It doesn’t have a ring on his finger.’”

Looking closely at the left hand of the statue, a bronzed ring is on his finger.

Ceremonies are hosted throughout the year at the park such as the Memorial Day and Veterans Day celebrations and the Fourth of July potluck. It also hosts Marines’ weddings and promotion ceremonies.

“It’s a very active park,” Eggleston said, adding he’s not sure how many visitors come to the park each year, but guess it would be about 7,000 to 8,000 people.

The park is closed for the fireworks celebration. The park opens at sunrise and closes at sunset.

The members of the HMLA 469 who died in May in a helicopter accident while delivering supplies to people in Nepal, former San Clemente police chief Albert “Ace” Ehlow and former longtime city clerk Max Berg will all be recognized during the Oct. 11 ceremony.