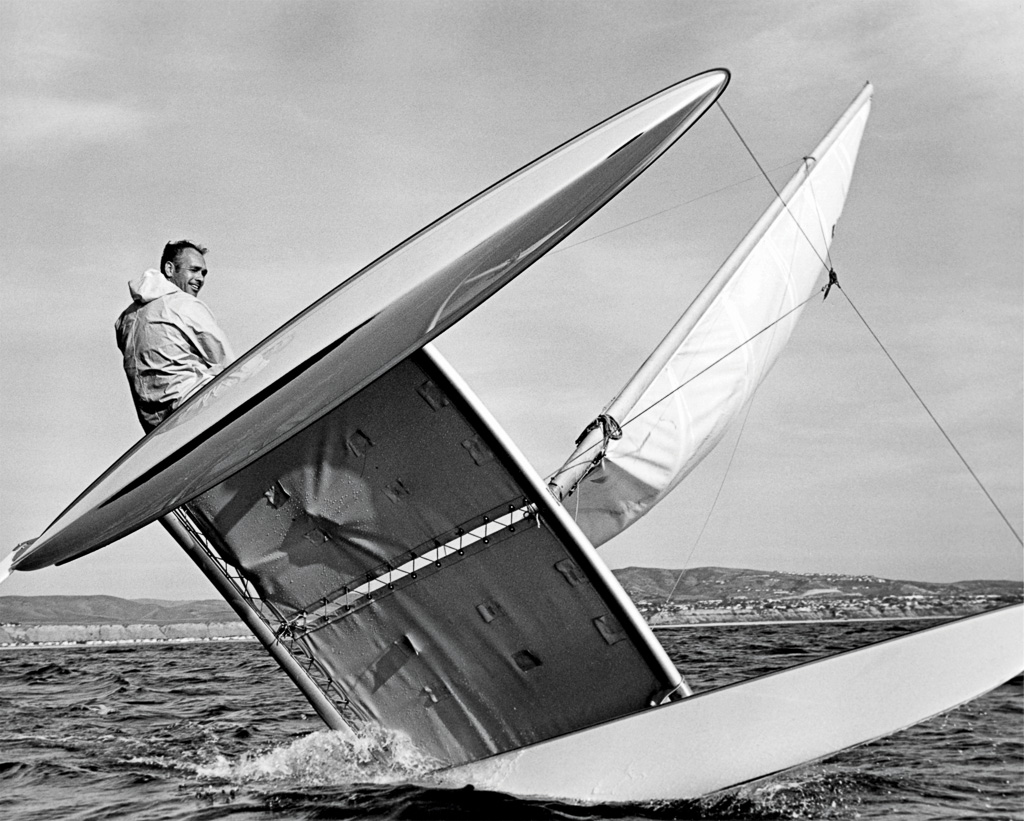 Celebrating a Half-Century of the Hobie Cat

With a regatta in Dana Point this weekend, the world’s favorite little sailboat gets some time in the sun

“Phil started it with the 16-foot outrigger that he built,” recalls Wayne Schafer.

At 90 years young, Schafer has lived on Beach Road since 1953. He is a founding member of the venerated Poche Surf Club, and the Phil he’s referring to is Phil Edwards, who used to rent a room from him. The stretch of sand in front of Schafer’s house also happens to be where he and Hobie Alter perfected the classic little sailing vessel, the Hobie Cat.

“Guys would say, ‘If I buy this catamaran, can I keep it on your beach?’ So, we had different catamarans here that different people bought. We had this cross-section of catamarans, which was very good because it allowed us to try all these different boats, including the Pacific Cat, or the P-Cat,” Schafer said. “None of them worked the way we liked, but that was the state of the art at the time. The one that worked the best was Phil’s 16-foot outrigger canoe. It was simple. We could take it on and off the beach. And that’s what put the concept of the 14(-foot) in Hobie’s mind. He felt he needed to amplify off of that.”

This month marks the 50th anniversary of the Hobie Cat, and this weekend a regatta and festivities are planned in Dana Point to celebrate the remarkable effects the boat has had on sailing around the world. Officially launched to the public in 1968, during its heyday in the late ’60s and ’70s, the Hobie Cat would bring sailing to the masses. From California and Hawaii, to the East Coast, to inland lakes and rivers around the country, to further afield in international waters. For a while it seemed that everyone was “surfing their sailboat,” as Bruce Brown famously said in The Endless Summer.

“Catamarans give more options for going bigger or smaller and they’re very steady boats. And they’re quick and fast,” Schafer said. “When he did the 14, basically, our concept was that we wanted to be able to take it on and off our beach here. Of course, Hobie had more in mind than just satisfying a few of us, though we were naturally part of the influence. In his mind, I’m sure when he designed this boat that California was going to be a market, and it was, and we did very well here in California—I say ‘we’ because I feel like I was part of it—but Hobie looked beyond that.”

Festivities are planned around the milestone, including a regatta of more than 50 Hobie Cats from around the world in the Dana Point Harbor on Oct. 27. There will also be a celebration at the Hobie Surf Shop in Dana Point.

Have you ever thought of building a surfboard out of something random, like coffee cup lids? If the idea of unorthodox, inspired surfboard is your kind of kink, you’re going to enjoy Vissla’s fourth annual Creators & Innovators Upcycle contest this Friday night, Oct. 26, at the Ecology Center in San Juan Capistrano.

Partnering with the Surfrider Foundation, the goal of the contest is to “challenge entrants to take something that might be considered waste and create something that can be used in the ocean.” This year’s finalists have arrived from around the world, including Switzerland, France, Australia and Brazil.

One of the more intriguing designs that’s sure to get a lot of attention is New Hampshire’s Korey Nolan, who, quite literally, made a surfboard out of coffee cups. Last year’s winner famously made a board out of cigarette butts.

The shindig at the Ecology Center runs from 6-9 p.m. and features food, drinks, music, surf craft of varying forms and a lot of good humans trying to do the right thing for the ocean.

There is certainly no shortage of ocean-related activities to get involved in this weekend.

The Hawaiian voyaging canoe Hikianalia has pulled into port in Dana Point for the weekend. After cruising Catalina earlier in the week, the Hawaiian voyaging canoe gracefully sailed into the harbor on Tuesday afternoon. It will be docked at the Ocean Institute over the weekend with free tours for the public on Saturday and Sunday from 10 a.m.-3 p.m.

This voyage is a continuation of Polynesian Voyaging Society’s “Mālama Honua” campaign that began in 2013, traveling 47,000 nautical miles, visiting 26 countries and 85 ports. Mālama Honua means to “care for Mother Earth,” highlighting the important relationship between humanity and nature and to inspire action toward a culturally and environmentally thriving world. The voyage has brought worldwide awareness around protecting our oceans and the vital need to reduce our footprint.