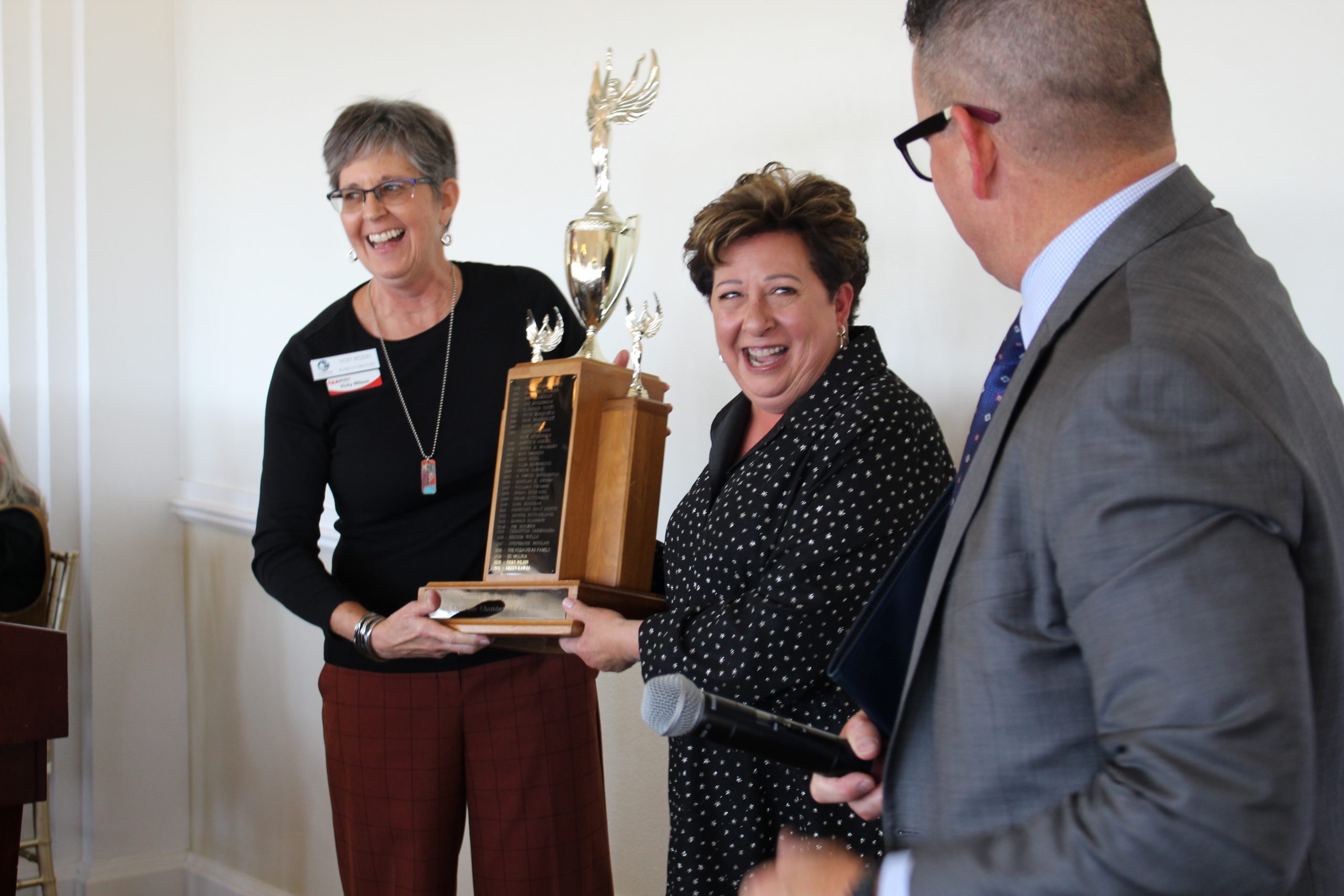 Bob Hayden, a 70-year-resident and native Californian, received the honor to a standing ovation at the Bella Collina San Clemente golf club. Hayden was among the handful of this year’s Chamber award recipients including Eileen Kawas, past president of the nonprofit PierPride Foundation, as Citizen of the Year, and San Clemente Times as Business of the Year.

Hayden was a former member of the city’s Planning Commission and Blue Ribbon Committee, and was involved with many other organizations like PierPride Foundation and the Boys & Girls Club of the South Coast Area.

Former Chamber Board of Directors member Chuck Narey, who celebrated his birthday on Friday, presented the trophy to Hayden.

“The human brain is a wonderful organ,” Hayden said at the start of his speech. “It starts to work the minute we’re born, works 24 hours a day, 365 days a year, and never stops until you receive a microphone.”

Hayden, who turned 104 last summer, gave his thanks, talked about his relationship with his wife, and spoke about the role he plays as part of the San Clemente Rotary Club. He also continued to tell jokes to everyone so people left with smiles on their faces.

Hayden told one particular joke of his about an old man who is losing his memory and tries to remember the name of a restaurant, which brought the house down.

“(The old man) said, ‘What’s the name of that beautiful flower with a long stem and thorns on it?’” Hayden said. “And (another) guy said, ‘Rose?’ And (the old man) leans towards the kitchen and he shouted, ‘Rose!’”

The Dorothy Visser Senior Center earned the Nonprofit of the Year award, which was accepted by Director Beth Apodaca and Steve Moyer, CEO of Age Well Senior Services.

Apodaca showed her gratitude for the senior center staff, volunteers, and community support that were integral in getting seniors through the COVID-19 pandemic.

From the beginning, when all the seniors were locked down, including some outside volunteers, the center suffered from a lack of overall help. Moyer said that the center never took a day off while being on the front lines.

“It’s just amazing because it’s because of the community, because of the volunteers, because of the City of San Clemente and all the government officials helping us in every way they could, (and) they made it happen, so thank you for that,” Moyer said.

Chamber Board member Vicky Wilson announced Kawas of PierPride, as the Chamber’s Citizen of the Year for 2021.

“I cannot tell you how overwhelmed I am by this, and I thank all of you,” Kawas said. “When I moved to San Clemente seven years ago, I knew this was what I wanted to call home … I knew I wanted to get involved in my community, and I think I made a really good decision.”

Before the awards were announced, outgoing Chamber Board Chairperson Jim Wynne spoke about the importance of serving to the best of everyone’s abilities, thanked Chamber staff, and mentioned his excitement regarding the new chairperson.

Rodriguez, owner of Rod’s Tree Service, accepted the position with “great respect and a strong sense of responsibility,” thanked Wynne, and informed the audience of Chamber members that his objective was to serve them.

“Our chamber exists to help you achieve your goals,” Rodriguez said. “As the new chair, I’m committed to fulfilling the mission we set for ourselves: provide an effective voice for the diversity, environment, and economic landscape of San Clemente … (and support) a better quality of life in our community.”