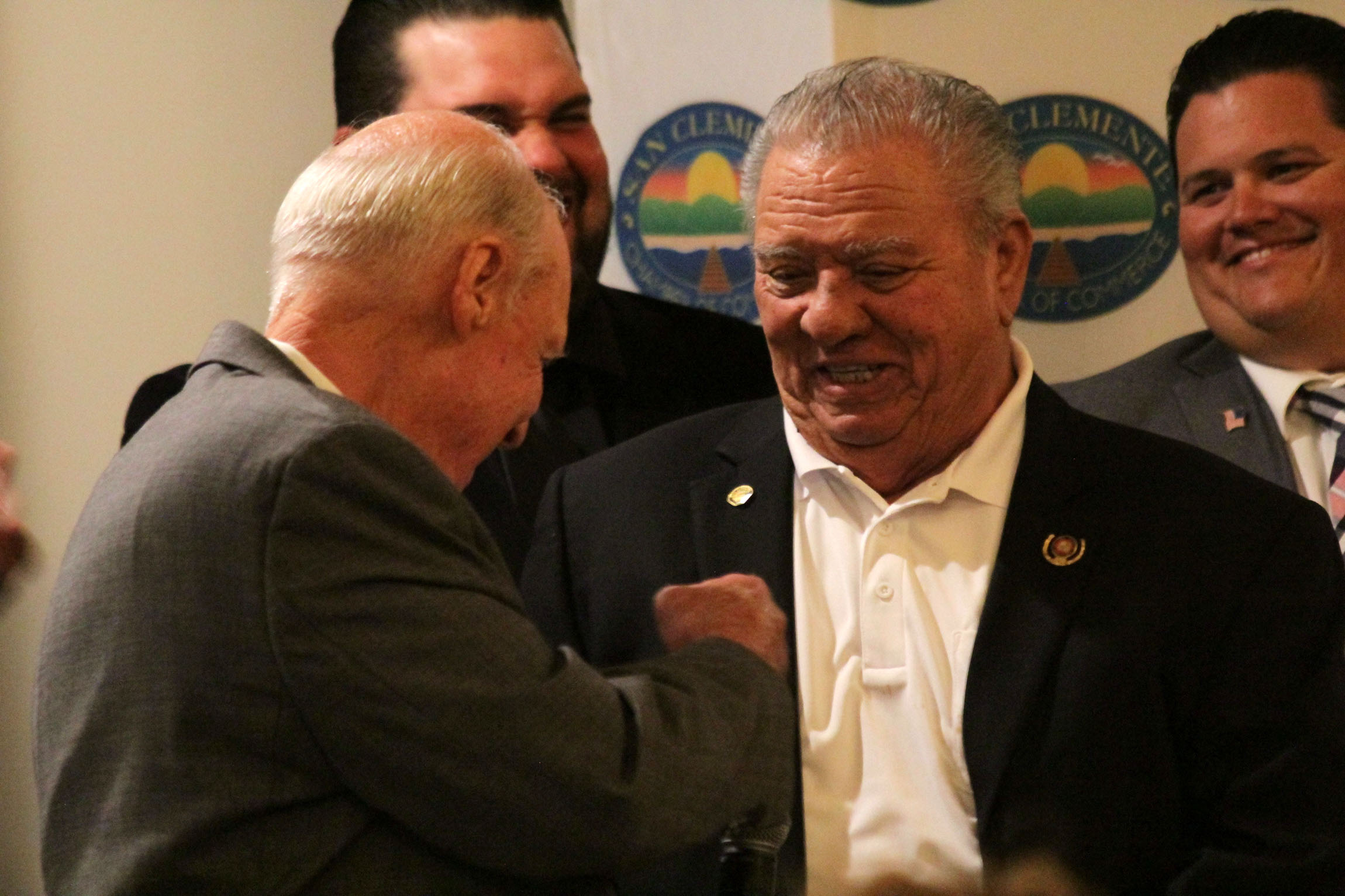 The San Clemente Chamber of Commerce held its annual installation and awards ceremony on Thursday, Feb. 20, gathering the local business community and dignitaries together to recognize a handful of individuals for their commitment to the city.

Ed Molina, the chairman and CEO of the local nonprofit Community Outreach Alliance (COA), took home the Chamber’s 2019 Citizen of the Year award, and Bella Collina San Clemente was honored with the Business of the Year award.

Former San Clemente Councilmember Lori Donchak presented the Citizen award to Molina, stating that as the head of COA, “he was an agent for change” who “worked with great energy, providing strategic planning and a focus on growing the organization to set the stage for future growth.”

While accepting the award, Molina noted that his father, who died last year, was the biggest influence in his life and thanked his wife Christina for “putting up with those endless hours” of work.

“Bella Collina’s warm personal approach to business, paired with their love for San Clemente, compels us to endorse them as the go-to venue for all your hospitality needs,” Wynne said.

Mark Zane, the owner of Bella Collina, credited his staff for being a great team deserving of the Business of the Year award.

“In honesty, it’s not me; I think we have the best staff, the best team,” Zane said of the award.

As part of the evening’s events, the Chamber installed its officers and directors for 2020, including new Chairman Burton Brown, who said he would continue fulfilling the Chamber’s mission of helping business owners achieve their goals “by the effective voice and the diverse economic landscape of San Clemente.”

The highlight of the night came when the Chamber announced that Richard “Rod” Rodriguez of Rod’s Tree Service, Inc. was honored with the 2019 Outstanding Lifetime Achievement award.

“The recipient of this award I’ve actually known for 25 years, actually longer than that, and he should’ve received this award at least 10 years ago,” said Larry Rannals, a Chamber board member. “But let me tell you why. Few men have demonstrated the level of commitment and passion for community service as this year’s honoree.”

After serving in the U.S. Marine Corps, being stationed at various locations around the world, Rodriguez and his wife Gloria settled in San Clemente in 1964, Rannals noted. Rod and Gloria met when they were in junior high and have been married for more than 60 years.

Rod Rodriguez began working for the city in the parks department before joining the San Clemente Police Department. He later earned a bachelor’s degree and left the police department in the late 1970s to start Rod’s Tree Service.

“Rod soon joined the Chamber of Commerce and was later elected to the board of directors. He quickly became known as the ‘I’ll volunteer for anything with the Chamber’ ” guy, Rannals joked.

According to Rannals, Rodriguez spearheaded the effort to have the city of San Clemente adopt a Marine battalion at Camp Pendleton and was a strong community advocate for the construction of the Marine Monument at Park Semper Fi.

During his acceptance speech, Rodriguez referenced his accomplishments, stating that he was “glad to say that I have helped out a lot of stuff to improve this city and help make it one of the greatest cities in the United States.”

“Everything that I do is something I do for community service. I don’t do it for the recognition, I don’t do anything for people clapping their hands,” Rodriguez said. “But I tell you, I love this city, I’ve been in this city for over 50, 60 years. I was born and raised in Tucson, Arizona, and I consider myself a native of San Clemente.”

Rodriguez went on to state that he would never move out of San Clemente for any reason, and he added that he was thankful for the award, yet didn’t quite believe he was worth it.

“I want to thank you for this award. I really was not expecting it, but I really don’t think I’m worthy,” he said, to a crowded room shouting back, “Yes, you are!”

Ricky Rodriguez, Rod’s grandson who helps run the family business, earned the 2019 Volunteer of the Year honor, while Vicky Wilson of the Tax Pros Plus San Clemente was selected as the Chamber’s Ambassador of the Year. The Chamber also recognized Marblehead Elementary School teacher Mary DeWitt-Fleischman as the 2019 Educator of the Year.

DeWitt-Fleischman said she was honored to receive the award, later stating that moving with her family to California from Chicago to teach was one of the best decisions she’s ever made in her life.

“Through the years that I’ve been a teacher with Capistrano Unified (School District), I’ve met the most wonderful families, and I’ve had the opportunity to work with such wonderful staff and administration,” she said, adding that working with children was “of course, the frosting on the cake.”