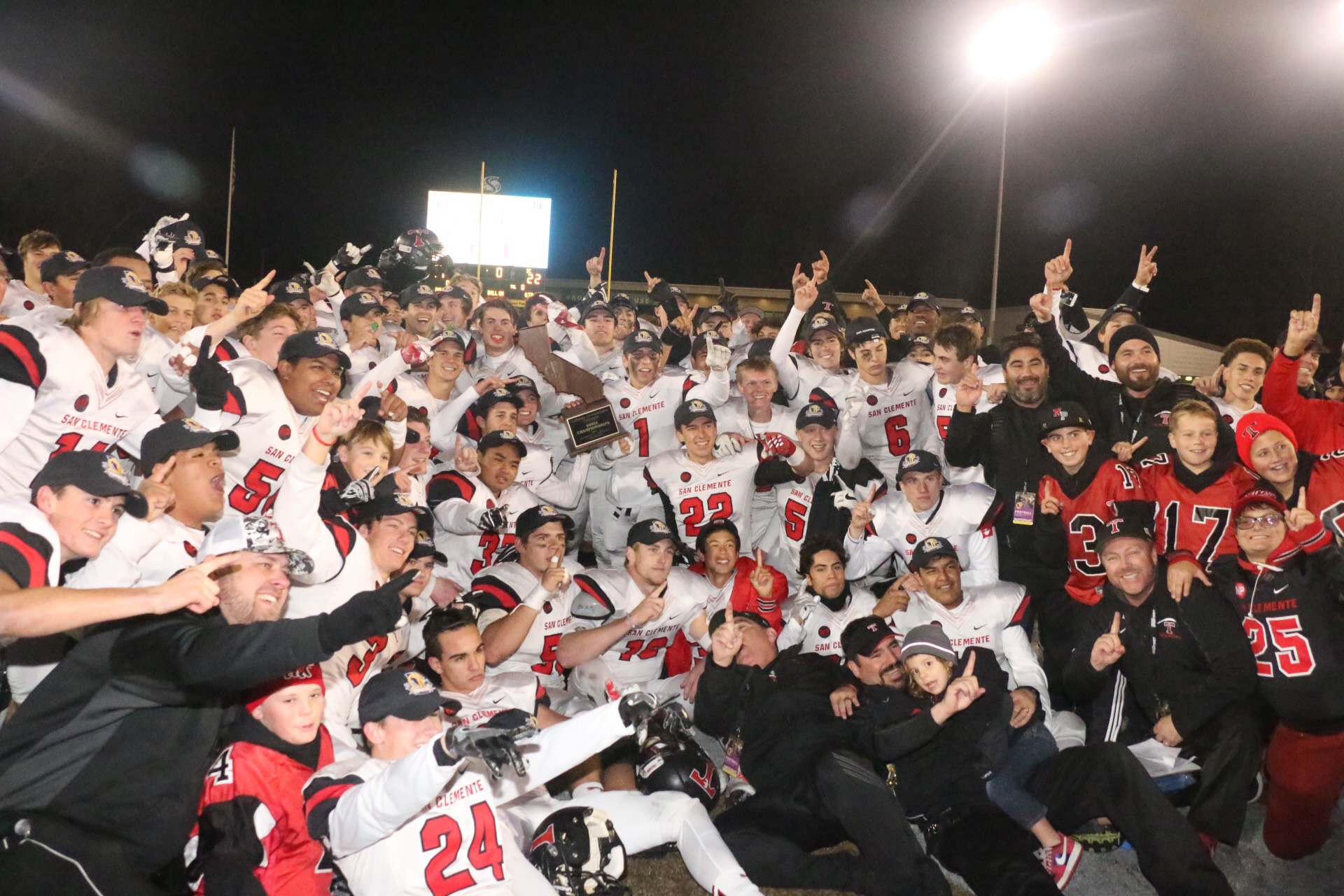 San Clemente’s season started exactly 136 days ago in the friendly confines of Thalassa Stadium. On Saturday, it ended 450 miles to the north, with the Tritons lifting the CIF Division 1-A Championship trophy under the bright lights at Sacramento State University.

The Tritons came from behind to defeat Del Oro of Loomis 22-17 and capture the school’s first-ever state championship.

San Clemente erased a 17-point deficit and took its first lead of the game midway through the fourth quarter.

Trailing 17-15, Del Oro was forced to punt to the Tritons’ biggest special teams threat, senior Brandon Reaves, after kicking away from him all night. Reaves returned the punt 54-yards by storming up the middle, then cutting across to his right, shedding a tackle near the goal line, and spinning into the end zone for the dramatic go-ahead score and the decisive 22-17 lead with 5:38 remaining.

“I caught (the punt) and I saw no one on the right side so I just ran. I got a big block at the end that just pushed me into the end zone, so that was big,” Reaves said. “When we were in the locker room (at halftime), we said, ‘We’re not losing this game.’ We didn’t come all the way out here to lose this game, so we gave it everything we had and this is the result.”

After giving up 17 points and 83 first-half rushing yards to Del Oro, the Tritons defense clamped down hard on their opponent in the second half. Del Oro was only able to gain 27 yards on the ground over the final two quarters, and the Triton defensive line, led by seniors Garrett Silverman and Austin Moore, disrupted Del Oro quarterback Stone Smartt to the tune of one lost fumble and three sacks in the second half, all of which were recorded by Moore in the fourth quarter.

San Clemente scored on a one-yard run by Reaves midway through the fourth to bring the score to 17-15. On the Golden Eagles’ next possession, Moore sacked Smartt for the second time on third down to force a three-and-out. The ensuing punt was the one Reaves returned for a score, a play that will go down forever in Triton football lore.

“The adrenaline was through the roof (in the second half). It was pumping through my veins,” Moore, who finished the night with four total sacks, said. “I’m happy to leave our legacy. This is the best feeling any football player can have.”

It looked like the Golden Eagles would extend their impressive postseason winning streak after its first 21 minutes of play. Del Oro dominated early behind its running attack and chasing defense.

Del Oro built a lead after senior Dalton Gee scored on a 22-yard run and quarterback Smartt followed with a four-yard scoring run of his own with 6:28 remaining in the half. Del Oro tacked on a field goal to go up 17-0, and its defense did its part by routinely pressuring San Clemente quarterback Jack Sears and keeping the Tritons’ offense off-balance.

That all began to change as the clock dwindled closer to halftime.

San Clemente got a jolt in the arm when Silverman sacked Smartt and forced a fumble, which Moore recovered to give the Tritons the ball at the Del Oro 10-yard line with 2:34 left before the half. Sears connected with receiver Chase Berman three plays later for a touchdown that cut the lead to 17-7.

The San Clemente defense forced a Del Oro punt on its next possession, but the snap went sailing high over the punter and into the end zone for a safety, allowing San Clemente to inch closer at 17-9.

The momentum stayed with the Tritons the rest of the way.

“I felt we took their best punch and we were going to start giving ours,” San Clemente head coach Jaime Ortiz said. “They had a lot of guys playing both ways and I feel like we weathered the storm and we had to start dictating the pace in the second-half.”

Sears completed 9 of 17 passes for 95 yards, one touchdown and two interceptions. Reaves ran for 63 yards on 14 carries and a score.

San Clemente’s victory was the third straight State Championship won by a Southern California team on the weekend. The schools representing the north had yet to win a game.

Home-field advantage was a real factor for Del Oro, as the team and their fans only had to make about a 30-minute drive. The San Clemente fans in attendance were outnumbered, but the Triton faithful who made the long trek made a good showing.

The Tritons proved to be a tough team to beat on the road this postseason. San Clemente captured the CIF-SS Division 2 Championship, the Southern Regional title and now the State Championship while playing away from home.

The win marked the end of an historic season for San Clemente, one that was filled with firsts. The Tritons won the program’s first-ever CIF-SS Championship, Regional Bowl Game and State Title. By notching their 14th victory, they became the winningest team in school history.

“It’s huge,” Ortiz said. “The biggest thing for me is taking it back home to San Clemente. To have so many people surround our community and the kids. It’s a nice tribute to our community. It’s kind of old school but that’s who we are.”