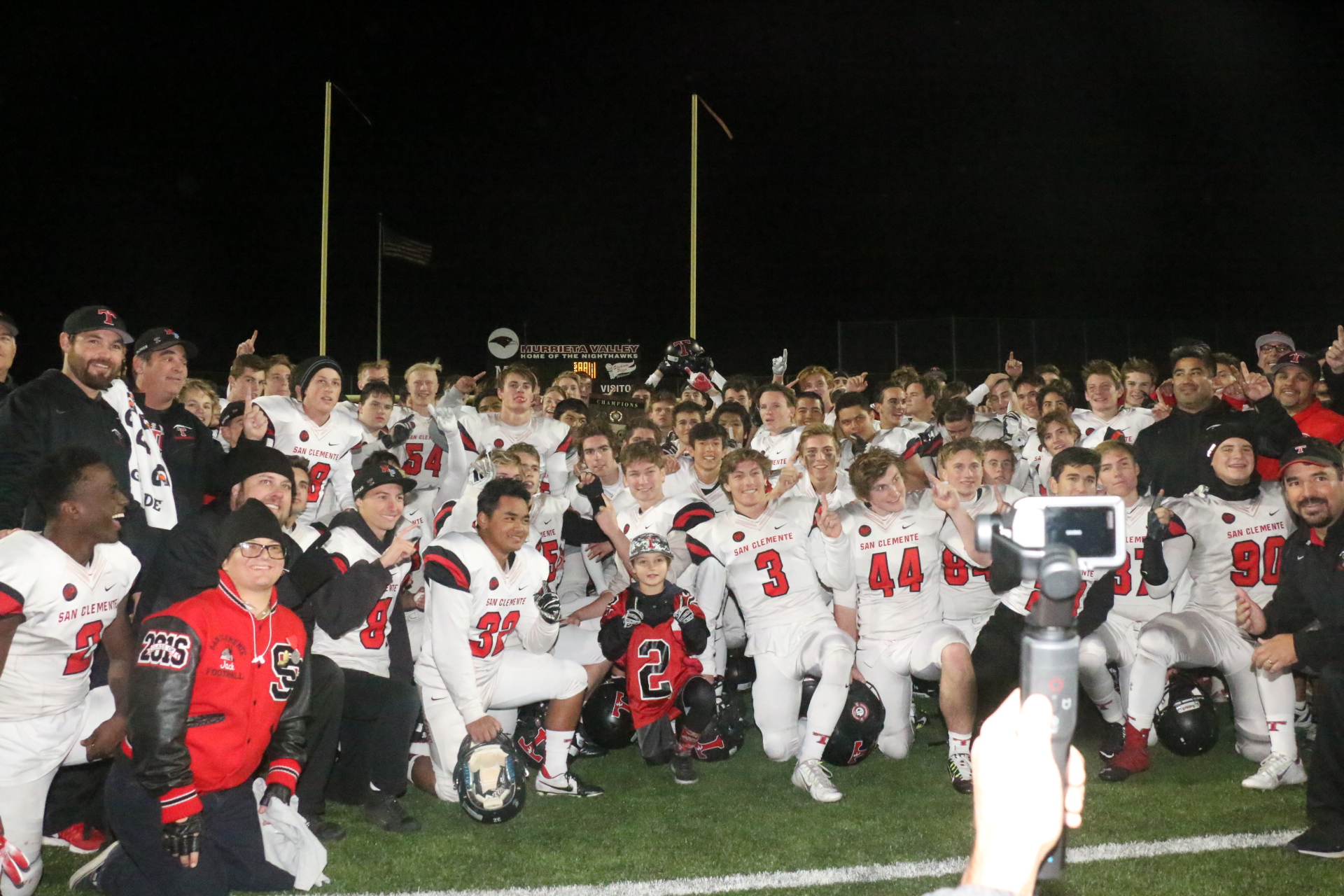 At times it felt eerily similar, but the ending was so, so different.

The San Clemente High School football team, making its third consecutive CIF-SS Finals appearance, found itself in another back-and-forth battle in a title game on Dec. 2, but this time they were up against Murrieta Valley with the Division 2 Championship on the line.

The Tritons saw a late 10-point lead shrink to 38-35 midway through the fourth quarter, bringing back memories of years past when the lead ultimately slipped away. But a scorching 67-yard touchdown run by quarterback Jack Sears late in the final quarter and huge second-half defensive stands sealed a 45-35 victory for the Tritons.

It is the first CIF-SS football title in San Clemente history. Up until Friday night, the Tritons history in CIF-SS Championship games had been one of close calls and heartbreak. This group, however, changed all that with a well-balanced performance against the 10th-ranked team in California.

The Tritons defense was determined to stop the high-flying Murrieta Valley offense, and came up with arguably the game’s biggest play just three minutes into the third quarter, with San Clemente up 17-14. Nighthawks quarterback Hank Bachmeier dropped back on third down at midfield, and the Tritons defense wrapped him up. Bachmeier tried to hand the ball off, but fumbled, and Ryan Russell recovered for San Clemente. Brandon Reaves found the end zone five plays later on a three-yard run and San Clemente took a 24-14 lead and all the momentum.

The Tritons 10-point advantage would continue to hold strong the rest of the way. San Clemente scored on four of its five second-half possessions, and punted just once all night.

Murrieta Valley came dangerously close to overcoming the deficit thanks to Bachmeier, receiver Marquis Spiker, and running back Olita Palmer.

Bachmeier and Spiker connected for two of their three touchdowns in the second half, including a 55-yarder and a 44-yard strike that Spiker took away from a San Clemente defender in the air that cut into the Tritons lead 31-28.

Spiker corralled nine catches for 226 yards, and Palmer had a game-high 224 yards rushing on 26 carries.

Following another Reaves touchdown run with seven minutes left in the game, his second of the night, Palmer carried the ball 80 yards on four plays on the Nighthawks next possession to make it 38-35.

But Sears would not let the Nighthawks come any closer. Every time Murrieta Valley inched closer, the Tritons were able to mount an answer. Sears’ emphatic final response came when he broke away down the sideline for his second and final rushing touchdown with 5:56 remaining to build another 10-point advantage. Sears had four total touchdowns, including two passing throws, and ran for 173 yards on 17 carries. He also completed 18 of 22 passes for 209 yards.

Murrieta Valley had one final chance to make things interesting on its final possession, trailing by 10 with five minutes to go, but Reaves, who was playing cornerback, swatted a Bachmeier pass on fourth down at their own 40 yard line to put the game away.

“I can’t put it into words. This is a team win. We got here because of every aspect of our team. Everybody did something to contribute this year. Our defense stepped up huge on that fourth down,” Sears said.

San Clemente was determined to stop Palmer and the Nighthawks run game, and efficiently ran out the clock in the first half to keep the ball out of the hands of the Murrieta Valley offense. The Nighthawks managed just five plays from scrimmage in the first quarter while San Clemente built a 10-0 lead following a Tristan Trager field goal and a four-yard touchdown pass from Sears to Chris Kane. It was the first time Murrieta Valley failed to score in the first quarter all season.

“Our defense played with a chip on its shoulder,” San Clemente coach Jaime Ortiz said. “All we heard all week was how great Murrieta Valley’s offense was and I thought defensively we played pretty well in the playoffs. We had some moments but we made the plays when we had to.”

Palmer would not be denied on the next Nighthawks possession, however, and he put the home team on the board with a 22-yard scoring run up the sideline to cut into San Clemente’s lead 10-7.

Sears and running back Austin Whitsett took turns breaking off big plays on the ensuing San Clemente drive, which was capped off by a one-yard Reaves touchdown run to make it 17-7.

A 22-yard touchdown pass from Bachmeier to Spiker cut into San Clemente’s lead 17-14 and closed out the first half.