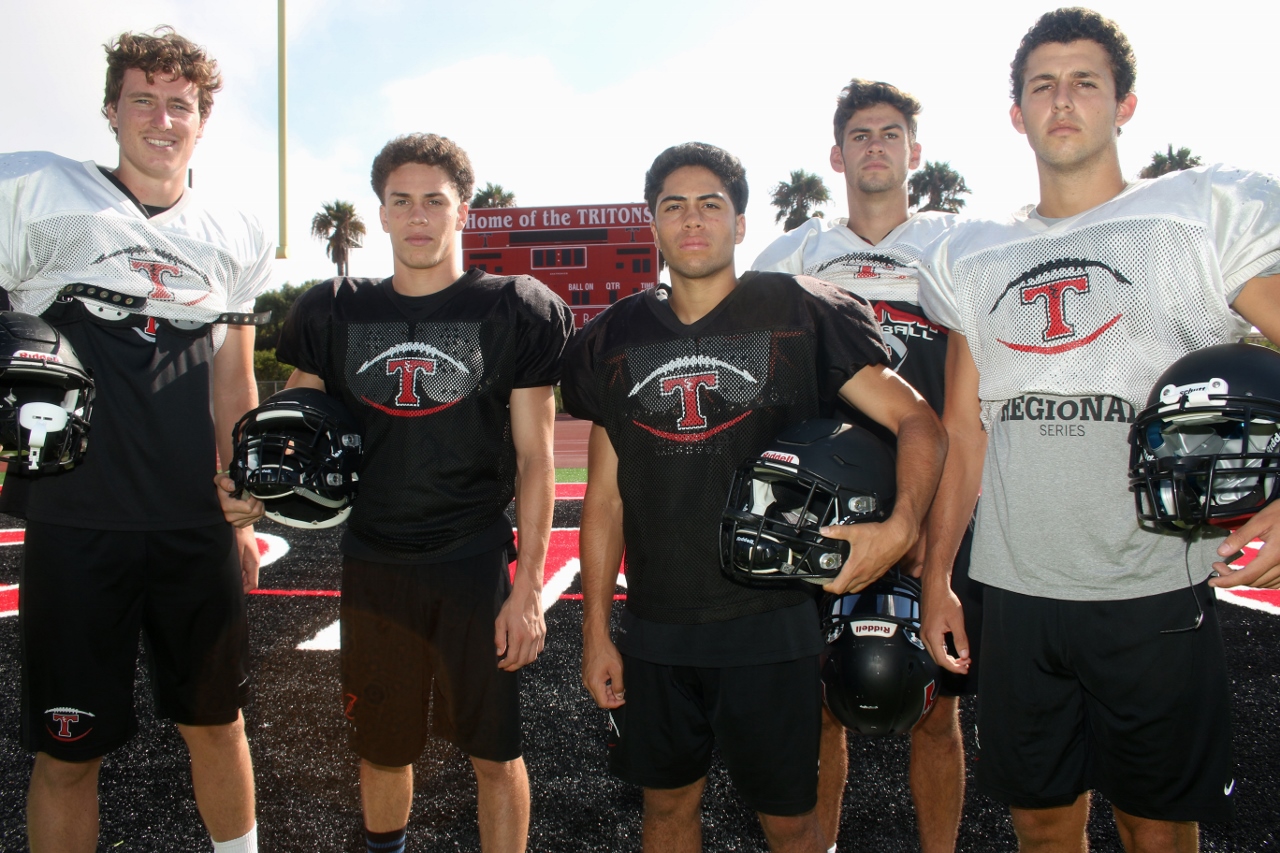 In our annual San Clemente High School football preview we delve into everything you need to know about the upcoming Triton season. Scroll through the PDF version above for more photos and interviews.

Jaime Ortiz was standing on the sidelines of a recent USC football practice when the shirt he was wearing sparked the curiosity of a woman standing nearby. The words “Triton Football” emblazoned in red and black caught her eye, and she had to ask the coach a question.

Name recognition, it seems, has caught up to the San Clemente High School football program.

It’s no surprise Ortiz continues to field questions like that and receive congratulations from residents and strangers alike.

Players like Sears and Sam Darnold, both now playing football at USC, brought the Tritons into the spotlight in recent years, culminating with the program winning CIF-SS and state titles in 2016. The Tritons reached the top of the California high school football universe, and returned home as the toast of Orange County and the pride of the beach community they play for.

Ortiz and his players allowed themselves to bask in the victory and the special season, but only for so long. As is the case in any sport, they knew the next season was just on the horizon.

The 2017 Tritons will begin the new year under a microscope, but are loaded with returning talent. They’ll run through a tough schedule and have been moved up to CIF-SS Division 1.

Dealing with the Hype

Whenever a team wins a CIF-SS title, let alone a state championship, they enter the next season as a sort-of “marked man”. Nearly every team they face next season will have that date circled in red, knowing they’ll be playing the reigning champions.

The Triton players know this all too well.

“I love it,” senior tight end Chris Kane said of the Tritons’ position. “To have people mark our game on their calendars … that’s awesome for us. It adds to our competitiveness.”

Ortiz said the coaching staff has kept the focus on the field, working under the guiding mantra of “if it ain’t broke don’t fix it.” Just because they won several games last season hasn’t drastically affected the way the Tritons are preparing for the new season.

“Sometimes if you try and change too much, you forget everything that you changed,” Ortiz said. “There are little things we’ve done, and we have a couple guys going both ways more than we did last year, but I don’t think a whole lot has changed. The kids still want to work hard and represent their community and their school.”

The Tritons return a nice mix of impact starters on offense from last year’s squad, which averaged 36.4 points per game.

The Tritons are deep at receiver, and will deliver a one-two punch with all-league wide out Keith Jones and four-year starter Chase Berman.

Keeping up the tradition of top-level tight ends in the program is Chris Kane, a hot recruit who reeled in five touchdown passes in 11 games during an all-league junior campaign. Kane is a versatile weapon who can block as well as be deployed at wide receiver.

The Tritons are inexperienced on the offensive line, but have returning senior left tackle Thomas Wade, who recently picked up a handful of collegiate offers.

The big question mark on offense is at quarterback.

After several years of stability at the position, a quarterback competition is underway to see who will win the starting job. Juniors Jay Baggs, Rob Farney and Brendan Costello, a transfer from Santa Margarita, are getting reps in practice. Ortiz believes the Tritons next signal caller will emerge after a few more weeks of practice in pads at game speed.

Before the start of last season, Ortiz returned to the role of defensive coordinator for the first time in four seasons. He wanted the Tritons to fly to the ball and play what he calls “swarm defense”.

Now with a full season of Ortiz’s defensive philosophy in place, the Tritons are poised to be strong on defense yet again.

The Tritons will have one of the more dynamic groups of defensive backs in Orange County. Seniors Branden Wilson (cornerback), Bryce Wilson (safety) and Jack Shippy (safety) tormented opposing offenses last season, especially when Shippy jumped into the mix after sitting out the first five games due to transfer requirements. Once Shippy joined the team, the Tritons had a trio of game-changing players that combined to record nine interceptions.

“Because we have such a tight bond, out on the field it’s like playing with your buddies on the schoolyard. It’s like a game for us,” Shippy said. “We’re really able to compromise and communicate with each other.”

As a result of their success over the past two seasons, San Clemente was moved up from Division 2 to Division 1 this offseason. The Tritons will be one of 20 teams vying for 18 available playoff spots next winter.

In preparation for South Coast League play and for a run at the playoffs, the Tritons will play a difficult schedule.

Ortiz said it was hard to schedule games against Orange County opponents, so the Tritons will play games against quality non-county programs like Oceanside (Aug. 25), Murrieta Valley (Sept. 15) and Palos Verdes (Sept. 22).

Highly-ranked Mission Viejo awaits the Tritons in the South Coast League. San Clemente finished second in league behind the Diablos in 2016.