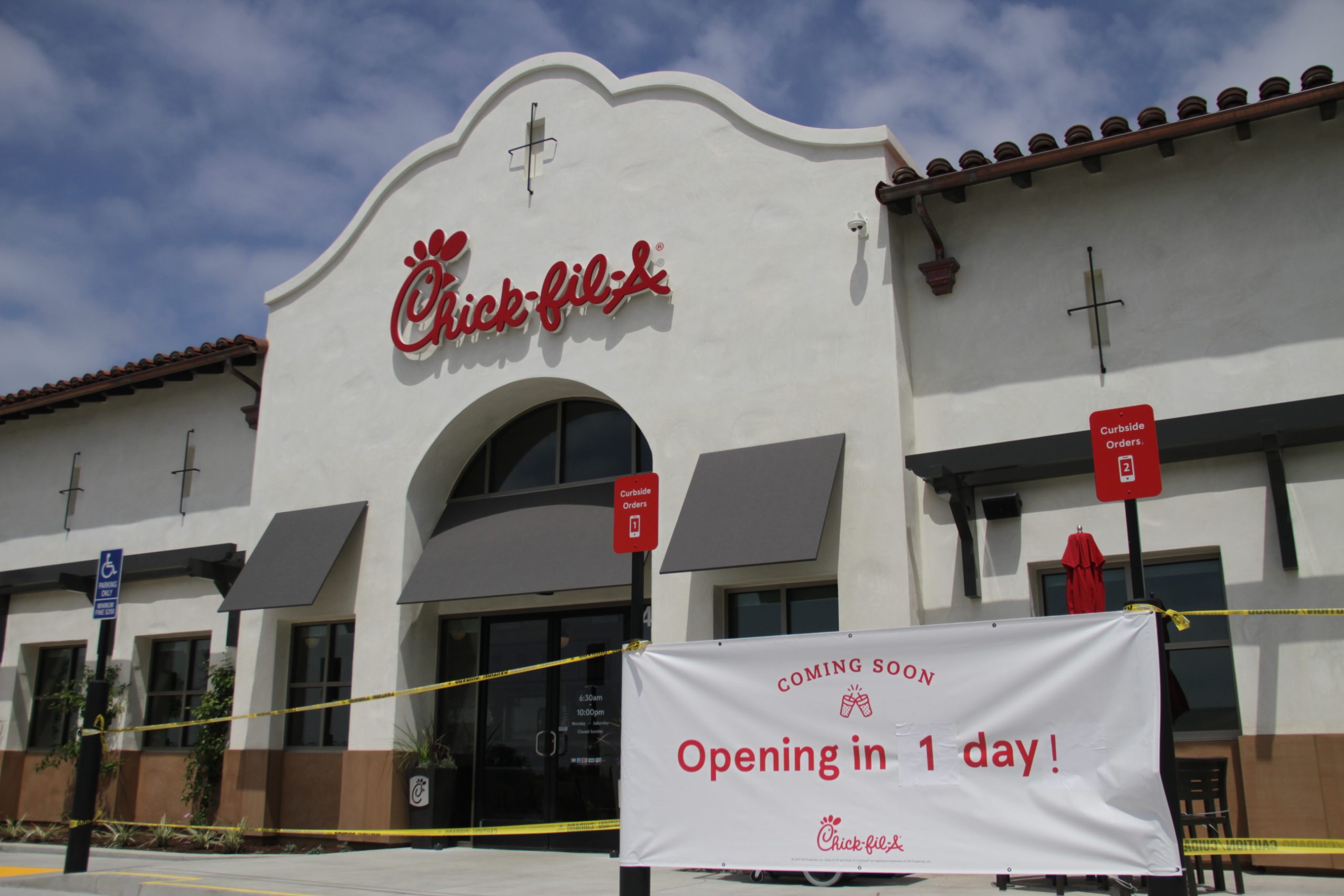 The wait is just about over for locals eagerly waiting to get their hands on some Chick-fil-A, as the new restaurant in San Clemente is set to open on Wednesday, July 1.

Beginning at 6:30 a.m., the new Chick-fil-A, located on the north end of the Outlets at San Clemente, just off Vista Hermosa near Interstate 5, will open its drive-thru lane to customers. Delivery services will soon be added.

“We look forward to serving great tasting food and offering a great place to work and a safe welcoming environment,” Chick-fil-A, Inc. said in an emailed statement to the San Clemente Times.

Because of the ongoing public health crisis, the new restaurant will be limited to drive-thru and delivery services, according to the company.

“The health and safety of our Guests and team continues to be our top priority,” the company added in its statement. “We have adjusted our service process in many ways to ensure Guest and Team Member safety.”

In a separate email from Erik Baker, the owner of the new franchise, he noted that there will be an additional lane for third-party and mobile carry-out pickups. And beginning on Monday, July 6, the restaurant will launch its delivery service through Chick-fil-A’s mobile app.

As for dine-in and in-store pickup orders, Baker wrote, “We hope to open up to front-counter ordering for carry-out very soon, and are working to provide limited dine-in seating before too long.”

Construction of the restaurant, which ramped up earlier this year, was able to stay on track with the restaurant’s initial timeline, even through the pandemic, the company said.

The restaurant is set to employ about 148 people, up from the original goal of hiring 134 employees, the company noted.

And just on the other side of the Outlets’ complex, the long-awaited luxury movie theater is months away from completing the outside shell of the facility, according Dale Davison, senior vice president of operations and development for Metropolitan Theaters.

The 49,000-square-foot theater will feature 10 screens, including two large-format presentation auditoriums, as well as “distinctive” food menu items and a stand-alone bar where people can grab some libations regardless of whether they’ll see a movie

“The theater will redefine the motion picture-going habits of guests in Southern Orange County,” Davison said. “It’ll be far superior to anything else in the immediate marketplace in terms of accessibility.”

Davison also touted the theater’s “seamless” food ordering experience, explaining that while kiosks will be set up at the theater to order in person, guests will also be able to order their food at the time they’re purchasing their movie ticket online. When a guest checks in with their online ticket, the theater’s kitchen will know to start getting the food ready and take it to his or her seat.

“It’ll be a totally seamless experience, and we think it’ll be extraordinarily received,” Davison said. “The level of service we’ll provide, as well as the aesthetic atmosphere, the lobby, the bar space—irrespective of how great the auditoriums will be—the space will be a magnet . . . a popular spot for South Orange County.”