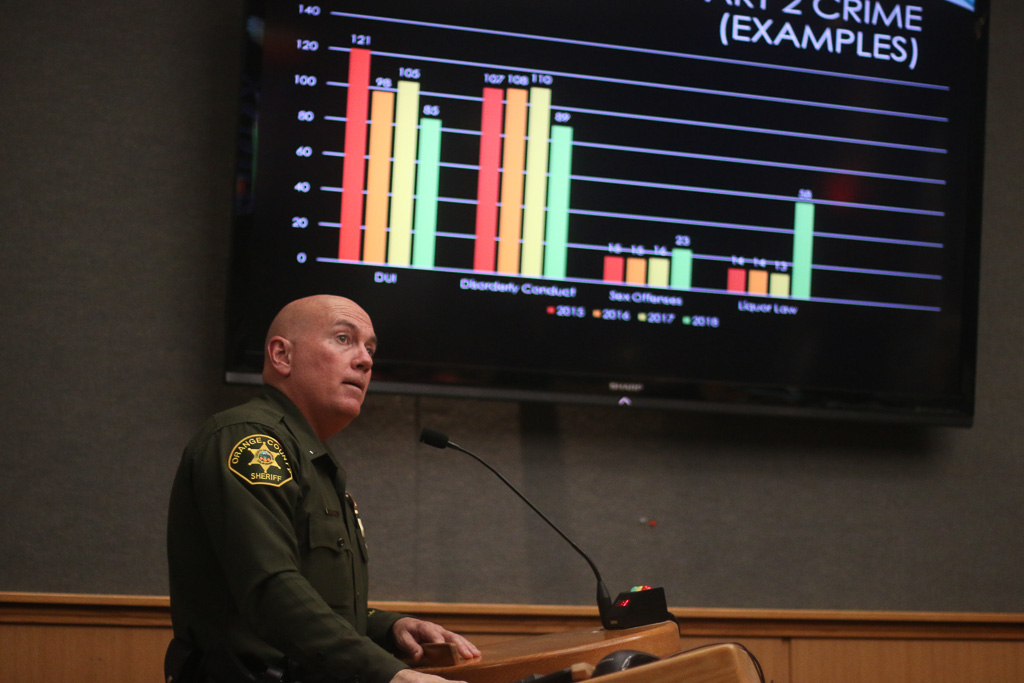 Lt. Mike Peters, chief of San Clemente Police Services, spoke about the city’s 2018 crime statistics compared to the past few years, and a few things stood out to him.

The highest-priority calls, P1, which include the most serious crime reports, have been going up slightly from last year but are still lower than 2016. Peters, however, said deputies have been able to engage calls more effectively in recent months.

“It’s actually good when I see the fluctuation in the numbers because when they’re not getting assigned, that means that deputies are out in the field searching for things,” Peters said.

Assaults had increased 71 percent, but that’s a total of 45 more incidents the city experienced in 2018.

P1 crimes had seen a “dramatic” decrease since 2014 with the implementation of Props 47 and 57, Peters said, because certain crimes were reclassified as lower-level offenses.

The largest increase in crime has been theft and burglary, to which Peters reminded people to lock their car doors, not to leave valuables in them and other basic prevention tips.

“The thefts (are) what everybody is feeling around our community,” Peters said, adding that he recently met with members of the Talega community who want to start neighborhood watches and put in license plate scanners to help officers apprehend getaway cars.

New cameras installed by the city have also helped as a crime deterrent. Peters said something that actually happened the day he spoke included surveilling a drug deal in which officers were able to respond and cite.

“The cameras have already paid for themselves,” Peters said.

Accident have gone down slightly throughout San Clemente, as have DUI arrests, according to the data Peters provided.

Peters said community members may email him about starting neighborhood watch groups throughout the city. He can be reached at petersm@san-clemente.org.