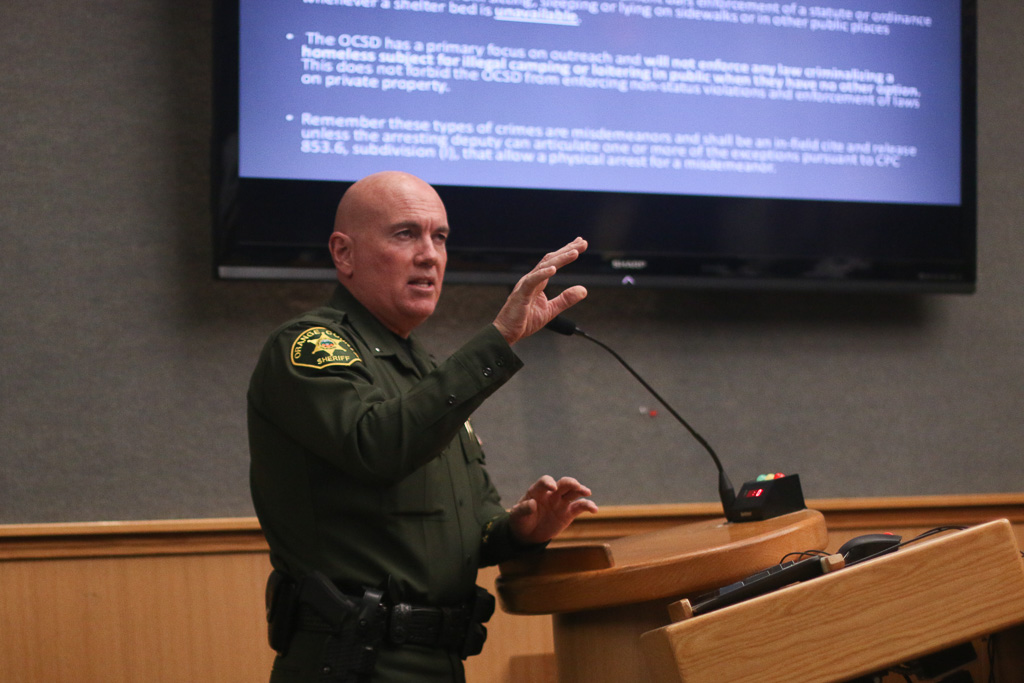 Lt. Mike Peters, the chief of San Clemente Police Services, was visibly irked by recent posts on social media regarding crime and safety in the city.

During the Feb. 5 City Council meeting, Peters said he’s seen an alarming amount of content that is disruptive to the public-safety efforts his department is trying to make with regard to the homeless population.

“Social media is a proponent of some ideas that are unlawful, and it’s kind of frightening sometimes,” Peters said. “I try not to watch too much on social media. Unfortunately, it draws me in like a bad train wreck sometimes.”

During the meeting, Mercy House representative Stephanie Ogas, an outreach coordinator, said that San Clemente’s homeless population is mostly made up of people who have lived here, are from here or have family here. About 42 percent of the new contacts were identified as having some kind of local tie.

Ogas said it’s been difficult to increase their outreach numbers, because most of the homeless people they’ve communicated with usually go back to stay with someone they know or a family member when it becomes difficult to sleep outside.

Peters emphasized that the public needs to call the police to report a problem and not just send emails or post to social media. He also implored the community to not exaggerate the severity of their calls, as it can put both law enforcement and residents in danger.

“It gets a little ridiculous when folks out there, especially in the social media realm, want to identify a homeless individual, because of the way they dress or the way they look, as committing a crime; and there are terms for that, and there are protections in the Constitution for that,” Peters said. “And the folks in our community and across our state need to understand they voted for things like (Props 47 and 57).”

Peters pointed directly to Props 47 and 57 as the main source of increasing homelessness. According to the numbers that Peters said he compiled, there are about 42,000 more people on the streets who would be in jail now if low-level drug offenses had not been reduced from felonies to misdemeanors. He also said that there are people on the streets with addictions to hard drugs who could be rehabilitated if they were taken to jail. He reiterated that it is not illegal to be homeless.

San Clemente’s ordinances permit officers to remove someone from private property, and officers can give the offender a notice. A repeat offense can result in a ticket, and in situations where the trespassing is likely to continue, officers can make an arrest.

The Point-in-Time Count that took place in January to take census of the homeless population throughout Orange County is expected to be compiled into a report by April.
People who leave items in areas where officers are permitted to enter will eventually be collected and stored for a 90-day period.

“It will be at the station, and we’re presently writing the protocols first, and (then) send to the county counsel,” Peters said. “When we have these campsites that are abandoned, we post a 24-hour notice for people to pack up stuff and move it and off the property.”

The city is also working on a bus voucher and hotel or motel voucher for families and people who are looking to find temporary and permanent housing.

The lawsuit between Orange County Catholic Worker, a nonprofit in Santa Ana, and the county has still not been closed. County officials declined to comment when asked if any developments had takem place regarding a south county shelter location.