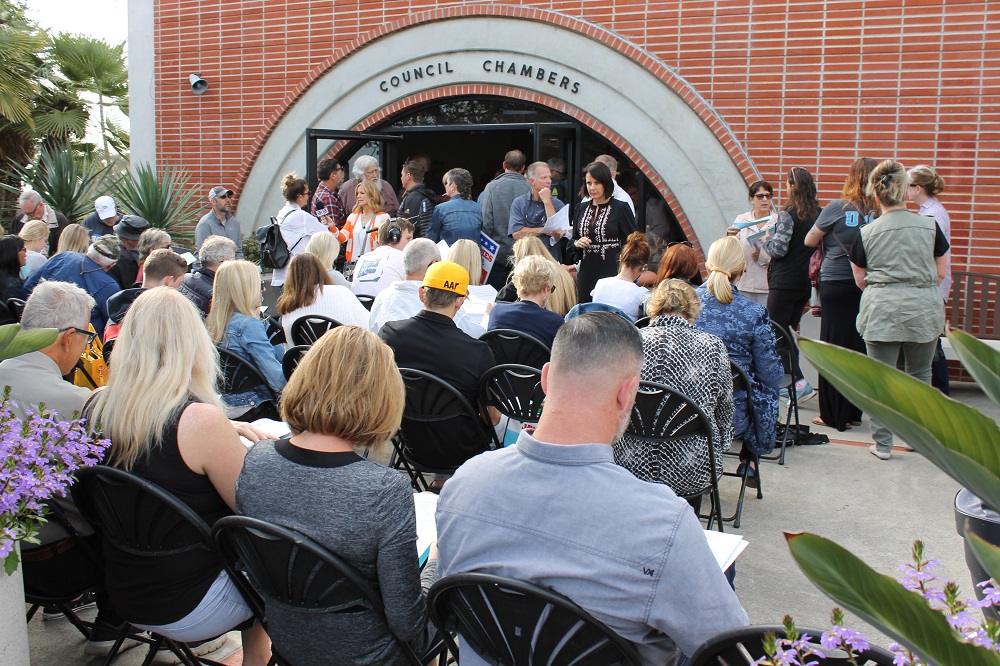 Two items on the agenda regarding homelessness in San Clemente were discussed in an open session, where numerous residents voiced their opinions on the matter within three-minute limitations.

One of the agenda items was an update on the evaluation and feasibility of creating a temporary homeless shelter in the city, which the council ultimately decided it needed more time to discuss, especially with regard to funding and property options.

The council also considered an urgency ordinance that would prohibit camping on public property. A crowd of more than a hundred locals cheered after the four councilmembers adopted the ordinance in a 4-0 vote, aiming to pull the rug out from the North Beach homeless encampments.

“We’ve been working incredibly hard on this issue for a lot of months,” said Mayor Pro Tem Dan Bane, who became the acting mayor upon the sudden passing of Mayor Steven Swartz. “I realize that we could have done this faster, and we should have . . . but we are here now. We have come up with a unique solution; not a long-term fix.”

The ordinance adopted states that exigent circumstances relating to immediate threats to the public health, safety and welfare require enforcement of the provisions of San Clemente municipal code (Chapter 8.86) prohibiting camping on public property, except as provided therein.

In other words, no tents or structures will be allowed erected in the city other than the designated area, Bane said.

City Manager James Makshanoff said city staff may begin moving homeless campers out of North Beach as soon as Friday, with Orange County Sheriff’s Department and County Counsel having agreed to assist in enforcing the ordinance.

Makshanoff said the city is preparing property where campers may be temporarily relocated. That property will be on a city-owned lot off Avenida Pico, between the city’s maintenance yard and U-Haul Moving & Storage of San Clemente, located at 310 Avenida Pico.

City staff said the temporary relocation encampment will be in a closed-off area where bathrooms will be provided. Estimated costs for the encampment are more than $50,000, city staff reported. A breakdown of that number included $20,000 for fencing, $20,000 for decomposed granite at the site and another $15,000 for lighting and security cameras. The city said it plans to install Porta Potties, trash service and may potentially hire a security guard for evening supervision at the encampment.

The city council decided it wanted more time to discuss a more permanent, long-term solution to the homeless crisis, as well as seek appropriate funding for a temporary shelter.