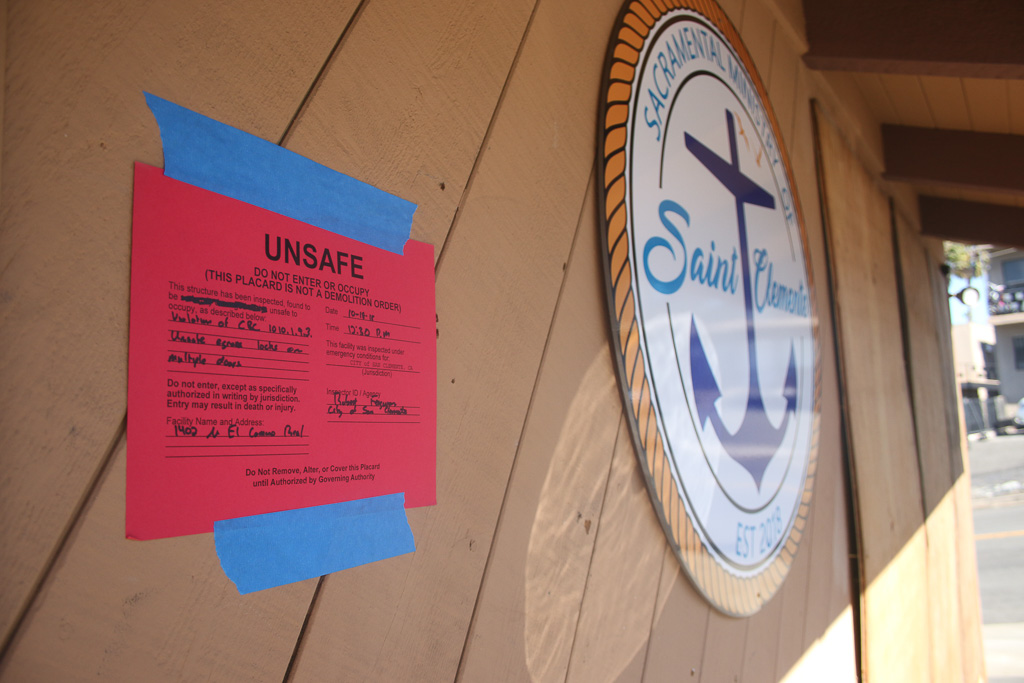 The city of San Clemente on Oct. 18 shut down a cannabis-based faith headquarters based on “unsafe egress locks on multiple doors,” which is a violation of the state’s building code and adopted by the city.

On Monday, Oct. 15, the San Clemente Times visited the Sacramental Ministry of Saint Clemente in North Beach requesting to speak with one of the ministers about the faith and what’s rooted in its sacrament, but they were unavailable at the time. On Thursday, Oct. 18, when the publication returned, city employees were boarding up the headquarters and a “do not enter” sign was stapled near the entry. A deputy with Orange County Sheriff’s Department kept watch from across the street as employees worked.

City Attorney Scott Smith said in an email that the City Council instructed “us to investigate and shut down” Saint Clemente, but he did not specify under what laws the organization was violating.

Assistant City Manager Erik Sund said in an email that the city was not investigating anything related to cannabis connected to the self-claimed religious institution.

In San Clemente, it is illegal to operate a dispensary of any kind, including delivery services. People are allowed to use cannabis within their own homes and can grow up to six plants, but commerce is completely outlawed.

Following the voter approval of Prop. 64 in 2016, which legalized sales of recreational marijuana, the city of San Clemente decided to enact stricter laws to forbid commercial transactions of the substance.

San Clemente residents voted in favor of the proposition; 17,119 voted yes and 15,049 voted no, according to the OC Registrar of Voters.

But it is still legal in California to gift an ounce or less of marijuana from one person to another.

“We’re a cannabis church that uses cannabis as our sacrament and entheogen,” a description of the church stated on WeedMaps.com. “We believe that this sacred plant really connects you to god, by letting you realize whats [sic] really important in life without putting any focus on all the negative emotions that we naturally encounter as humans. We also know that the blessed plant will unite us all and bring peace on earth.”

The church’s site on WeedMaps currently does not have a menu of cannabis products, as are provided on other dispensaries’ pages.

“They need to address all building code violations, and if they choose to continue to occupy the building, it must be a conforming use that complies with the San Clemente Municipal Code,” Sund said.