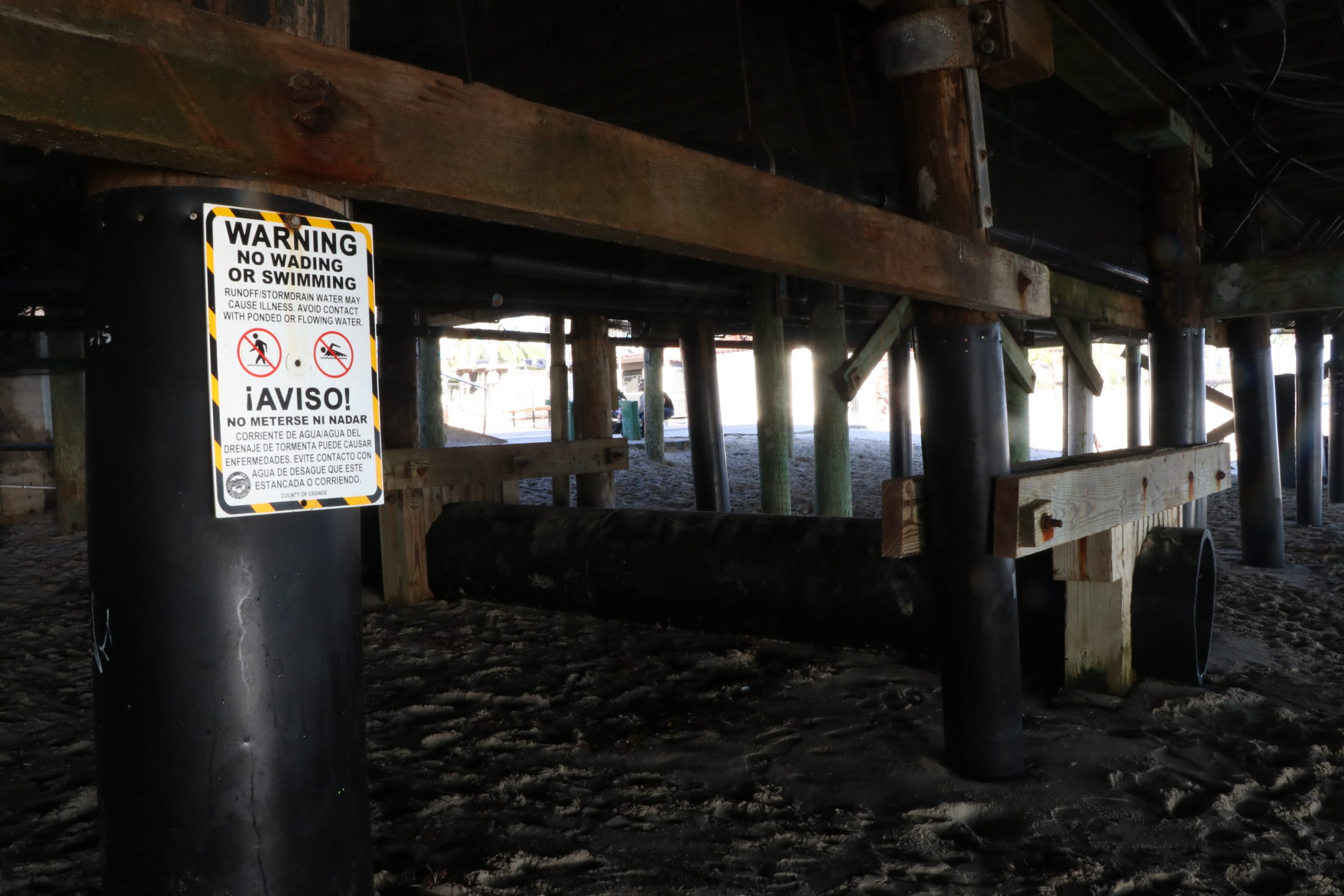 The city’s contractor hired to root out the yearslong cause of water contamination at the San Clemente Pier needs additional time to investigate why human waste is still being found at the popular beach spot, according to a new report to the city council this month.

Following a series of management measures that were deployed to identify the root causes of the pier bacteria, water samplings taken and analyzed from the storm drain system underneath the pier and the ocean shoreline earlier this year again found human DNA.

“Unfortunately, human DNA was still detected in the discharge water from the storm drain system,” the city’s Sept. 7 report stated. “Thus, the City needs to repeat some of the management measures … to identify the human waste sources.”

Signage posted under the pier, in between the two storm drains, warns beachgoers not to swim or wade in the water: “Runoff/storm drain water may cause illness. Avoid contact with ponded or flowing water.”

The latest findings and report to the council follow Heal the Bay’s most recent Beach Report Card that showed ocean water quality at the San Clemente Pier improved from previous years.

For the 2020 summer dry season, comprising the months of April through October, the pier earned a C, and during the winter dry season (November 2020 through March 2021), it was given an A.

A progress report to the city’s Coastal Advisory Committee in late 2019 explained that early samplings did find human DNA markers in the Pier Bowl storm drain system. Bird droppings, however, have long been believed by city officials to be the primary source of the pier bacteria.

The city has taken steps to deter birds from roosting underneath the pier by installing netting directly below Fisherman’s Restaurant and Bar—one of the management measures the city deployed.

The city also took video recordings of the sewer and storm drain lines to see whether infrastructure problems were allowing human waste to enter the system, but “no city-owned infrastructure issues were identified,” according to the report.

Business owners and managers were also interviewed to determine if human waste was being left in and around their dumpsters or on their property by homeless people, but none of the businesses, the city noted, reported any issues.

And samplings taken from wastewater reservoirs in garbage trucks, which sometimes leak on the street, showed that while there were “high bacteria levels in the water,” human waste “was not clearly identified.”

With human DNA still being found in the storm drains under the pier, the city said it will re-record the sewer lines, as well as again observe the garbage trucks and note “any homeless people and locations that could possibly contribute human DNA to the storm drain system.”

“Once these management measures are repeated and Staff feels confident the potential sources are abated, the City may need to conduct additional water quality sampling and analysis to confirm if human DNA is present,” the report stated.

The city is looking to have the study completed by the end of this year. As of press time, city management had not provided responses to San Clemente Times’ emailed questions.