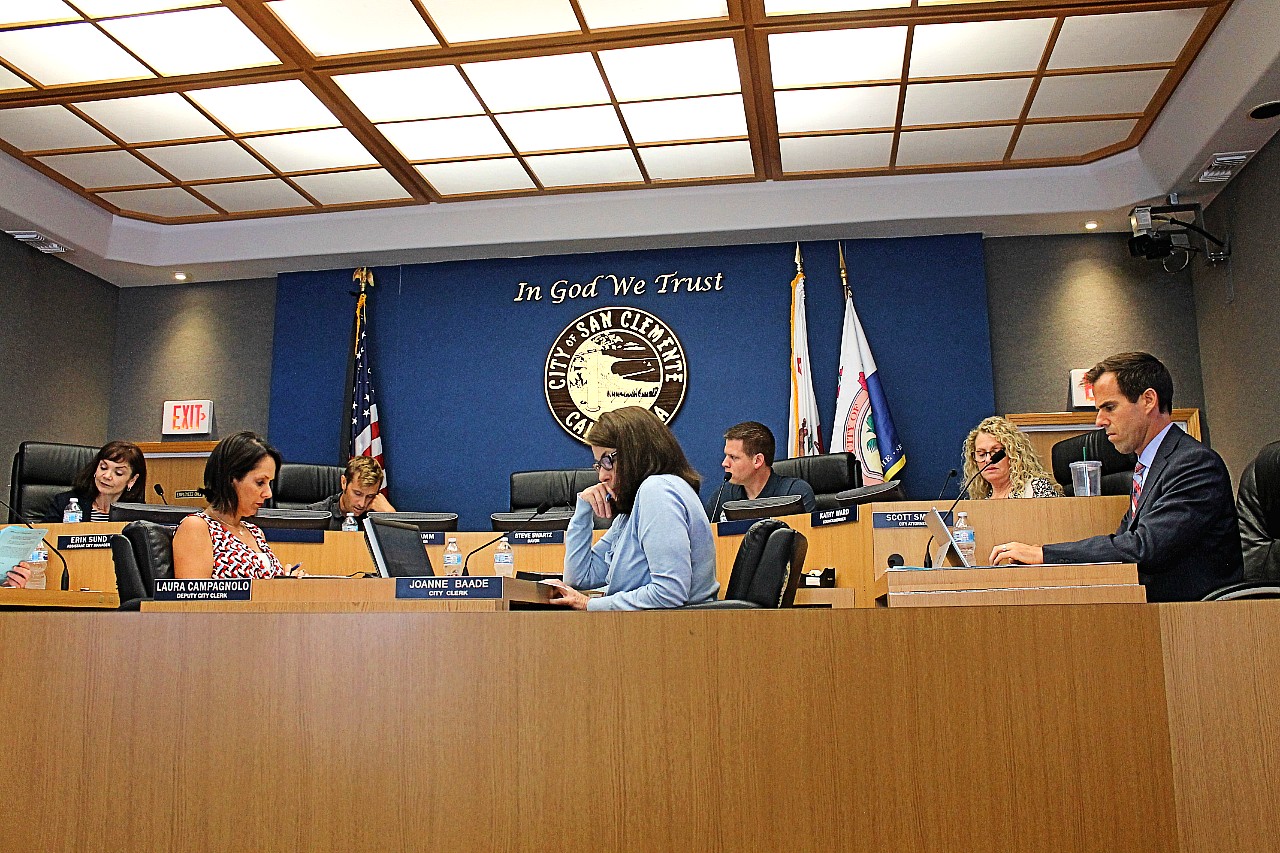 The city of San Clemente called a special meeting at 1 p.m. on Wednesday, June 26, to reconsider approval for its Fiscal Year 2019-2020 Police Services Contract, which ends June 30. The four councilmembers unanimously approved the contract.

Before the vote, several residents addressed the council, encouraging their elected leaders to approve the $16.3 million contract that would allow Orange County Sheriff’s Department to continue providing police services to the city, and approve budgeting for the addition of two deputies and one-full-time Crime Prevention Specialist.

Several locals voiced that they would like to see the city prioritize public safety and find funding to add more deputies.

Local activist Brad Malamud provided some statistics.  He said, “We had 91 violent crimes, including 9 rapes, 45 assaults, 37 robberies, 64 auto thefts, 4 arson and 816 property crimes. Does that sound like we are being protected?” Malamud said, “The Sheriff can’t stop stuff when they’re limited to 5 deputies per shift. They need more.”

Don Brown, resident and commissioner of San Clemente’s Planning Commission, scolded councilmembers for last week’s “embarrassing” council meeting. Brown said, “I’m here to talk about how we govern. I’m here to talk to all four of you, that you need to get together and govern—that’s what you’re elected for.”

The reason for the special meeting followed a controversial ending to San Clemente’s City Council meeting on June 18. At that time, Councilmember Chris Hamm had stated his support for the police services contract before announcing that he would be leaving the meeting early to return to work.

At the June 26 special meeting, Hamm said he informed Mayor Pro Tem Dan Bane during the council’s last break (on June 18) that he would be leaving early.

Hamm said, “He (Bane) and I were both under the impression that there was going to be a majority support for the contract going forward. And I think it was taken all of council by surprise when there was motion made on the floor that was not doing that. Course, Laura was well within her right to do that, and I’m not casting judgments either way, but I think we were all shocked.”

Councilmember Laura Ferguson said she was not told that Hamm was leaving the meeting early, and asked that next time, could he please inform everyone.

After Hamm left (on June 18), Ferguson made a motion to adopt the contract, but introduced a last-minute direction for staff to explore future budget cuts in exchange for hiring additional deputies, which irritated Councilmember Kathy Ward. Ward interpreted that Ferguson was trying to make changes to the budget, and if that were the case, Ward stated she wouldn’t vote on it without a “full council.”

Ward left the council chambers, choosing not to participate in the vote.

Because only two councilmembers were left sitting at the dais, Bane had said the council lacked a quorum and so they couldn’t vote on the Police Services Contract.

At Wednesday’s special meeting, Ferguson said she was within her right to make a motion and modify it.

Ward responded to her actions. She said, “What I did was take away the quorum because that’s all that I could do to prevent 10 to 15 critical service employees from being cut. And I did not know what would happen with that motion.”

Looking at Ferguson, Ward then said, “You certainly have the right to do it, but I also have the right to ask you, as a colleague of yours, that if you’re going to do something that is so drastic and against what the full council wanted, that you wait for a full council. You didn’t do that. You just wanted to make your motion, so I chose not to participate. It’s what I had to do.”

Ward went on to defend the need for San Clemente’s city manager and assistant city manager. Watch the full special meeting on YouTube.

OCSD Sheriff-Coroner Don Barnes wrote a letter on June 19 to City Manager James Makshanoff, expressing the Sheriff department’s disappointment over the council’s “inaction.” If approved, the contract would have renewed services July 1 with the Orange County Sheriff’s Department for the 2019-20 fiscal year.

Barnes wrote that the Sheriff was under no legal obligation to continue providing the city law enforcement services outside of a contract. While the contract did allow for a one-time extension, Barnes said without one, San Clemente would have no police services provided by the Sheriff effective on July 1.

“For the past 26 years, we have served the residents of San Clemente with exceptional law enforcement services, and I have continued to do so through personnel reductions while, during the same time period, the city’s population has increased significantly. Put another way, our personnel have carried the burden of doing more with less, and did so in the high-risk environment of protecting the public,” Barnes wrote.

Following a Facebook debate about the council meeting and unapproved police contract, a group of citizens expressed their dissatisfaction with two San Clemente councilmembers by installing red banners across the city that read, “Recall Kathy Ward & Chris Hamm for their Disgusting Behavior.” A few of the professional-grade banners were placed on a Vista Hermosa bridge and northbound highway overpass and on a fence at San Clemente High School.

Those responsible for the banners remain anonymous, but according to residents posting about it on San Clemente Life’s Facebook page, the signs were taken down overnight by someone else.

San Clemente’s next regular council meeting will be held at 6 p.m. on August 20, in the Council Chambers, located at 100 Avenida Presidio.