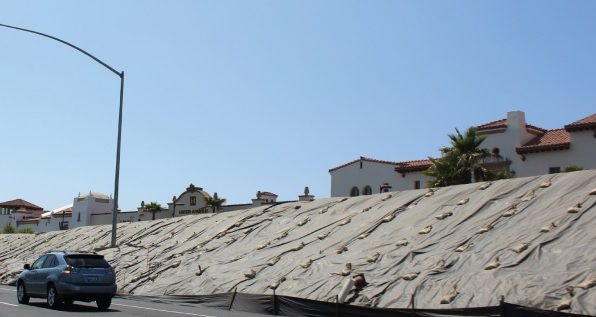 A decade-long debate may have been put to rest late Tuesday night when the San Clemente City County unanimously approved a sign exemption permit and the necessary environmental records to allow for a maximum of 25 permanent signs to be placed on the exterior, freeway-facing of the Outlets at San Clemente.

Of the signage, 17 are freeway-facing signs that will be for businesses with a maximum of 10 constructed on the east side of the wall (only seven can be placed on the east side until Phase II of the Outlets construction is completed), five will be placed on a hotel with two of the signs not being illuminated after 9 p.m. Four will be for identification of the Outlets and will be larger than the business signs, two of which are 200 square feet and two will be 100 square feet. The signs are to have “halo backlighting” to reduce their brightness, and the city approved a monochromatic dark bronze color to be used for all signs.

It’s unclear at this time if the Outlets owners would accept the city’s decision. The Outlets, by way of Villa San Clemente, LLC, are still contesting several civil lawsuits regarding the signage at the mall.

Originally, the Outlets applied for a total of 34 freeway-facing signs that would have the colors of respective trademarks. Officials with the city argued the color scheme wouldn’t matter so long as the emblems were clear.

Residents in the Marblehead Coastal development, The Broadmoor and other subdivisions in the city with views of the ocean either obstructed by the Outlets or affected in some way by lighting have been fighting any signage at the Outlets since the beginning.

Some of the signage will go on a 45-foot tower that hasn’t been built yet, which will hold identification signs with the insignia of the Outlets.

The main argument for the Outlets is that they want to be able to attract freeway motorists to their location in order to identify itself as more than a large blank wall facing I-5.

The main argument of opponents is that the signs will affect their property values and cause light pollution.

Susan Jenrich, the general manager of the Outlets, said the businesses have generated significantly more sales since the temporary signs at the Outlets were put in place and that permanent signage would continue to increase sales, translating to more revenue for San Clemente. When the Outlets were approved, it was devised that sales tax would help maintain San Clemente’s various sports parks and recreational activities.

During the meeting, San Clemente approved to increase the amount in legal fees its paid to firms to fight lawsuits filed by the Villa San Clemente, LLC regarding the signs, which totaled to about $500,000.

Phase II of the Outlets, which includes the construction of a hotel, the establishment of a movie theater and more, will not start until the first phase is completed. As part of the agreement, the temporary signs are to be removed soon.