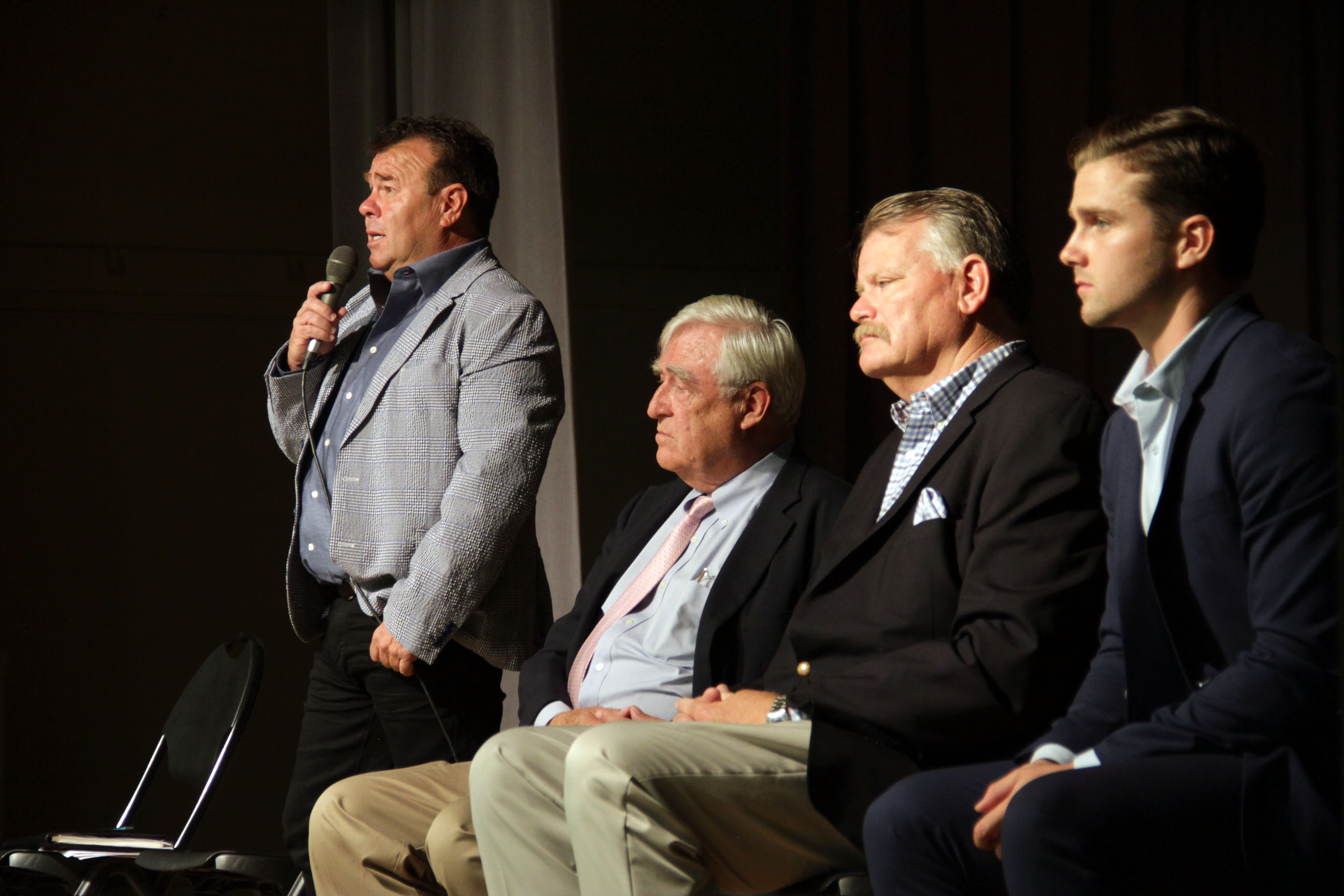 Getting nuclear waste out of San Onofre and resolving the city’s homelessness woes are among some of the top priorities of the city council candidates running in San Clemente’s upcoming special election.

Four of the five candidates participated in a special election forum on Sunday, Sept. 15, weighing in on a variety of topics ranging from the homeless issue to proposed toll roads, as well as government transparency and spending to parking in the downtown corridor.

The San Clemente Historical Society conducted the event at the community center, which attracted dozens of local residents who wanted to hear what the candidates had to say leading up to the Nov. 5 Special Election.

The election is being held to fill the seat left behind by the late Mayor Steve Swartz, who died unexpectedly this past May while vacationing with his wife in Palm Springs.

Missing from Sunday’s forum was Selter, who was scheduled to appear but, according to Historical Society President Larry Culbertson, had to cancel shortly before the event to tend to a family emergency.

Culbertson moderated the forum, giving candidates one minute each to respond to the questions.

James, who had previously run in last year’s city council elections but finished less than a percentage point behind Councilmember Kathy Ward, said he would work to increase law enforcement personnel but noted there needs to be a discussion on whether the city should continue to contract police services with the Orange County Sheriff’s Department.

One such organization Hinkle included was the Transportation Corridor Agencies, which oversees the planning of the controversial proposal to extend the 241 Toll Road through San Clemente, connecting to the I-5 Freeway.

“You can count that my opinions are my own and that they will be in office as well,” Hinkle said, before adding that he’s been “working on the issues that matter most to San Clemente residents longer than any other candidate.”

Coleman, the CEO of Classic Auto Sales, which specializes in vintage cars and auctions, said his top three priorities on the city council would be “cleaning up the homeless problem, taking control of our budget and getting politics out of city hall.”

McLane kept his opening statement short and to the point: he’s “the new guy” who, as a fifth councilmember, “will be the bridge” between the two sides of the dais, ending gridlocks and impasses.

“Beyond any issues, the city council is so frozen right now that it’s very difficult to get anything passed. . . . I will be the bridge,” he said.

Citing the May 24 removal of homeless individuals out of the North Beach parking lot and into the Avenida Pico encampment, Culbertson asked the candidates whether they support the way the city council has handled the “homeless crisis so far.”

While each offered varied responses, they all acknowledged that more should continue to be done. Hinkle, Coleman and James said the issue should be addressed at the county level.

“I think we need to do a lot more, but I don’t think that should rely on the city of San Clemente,” said Hinkle. “I think that we should demand that the county fund solutions outside of San Clemente to address the homeless crisis.”

The Pico encampment, Coleman said, was “poorly planned and was thrown up as kind of a from-the-hip-type shot” that is incurring “huge” expenses for the city.

James said he had supported the council’s actions up until its decision to open the outdoor homeless camp. He added that the council can “fine-tune it” by utilizing group tents with cots instead of individual tents and enforcing sanitary conditions.

“I’m very concerned about how we’re going to get people out of that lot, but we have to have some place for them to go, and we have to get (Orange County Board Supervisor and Chairperson Lisa) Bartlett to address the issue,” James said.

Asked about their thoughts on the proposed toll road extension and whether the city has done enough to prevent it, all four candidates were in lockstep, vehemently objecting to such an endeavor.

“I do not want the toll road coming through San Clemente, and I’ll do everything to prevent that,” McLane said.

Coleman shared a similar sentiment, stating that he feels “the toll road is at the end of the road. The toll road company has no business going through San Clemente, and it needs to be shut down.”

Noting that one of the proposed route extensions is for the toll road to fly over his alma mater, San Clemente High School, Hinkle said the issue is deeply personal to him and called the TCA “a corrupt organization that should be abolished.”

James, who called any extension of the 241 “an unholy alliance of labor unions, developers and road construction contractors who want to build a road for no damn reason,” said he was in support of state legislation proposed by Assemblymember Bill Brough to audit the TCA and limit its authority.

McClane later derided such an idea to disband the TCA, calling it a “pie in the sky” proposal.

“It’s kind of silly; it’s not going to happen,” he said, noting that while he doesn’t have a plan to address the expected rise in traffic in South County, the city should focus its efforts on first stopping the toll road altogether.

One way the city can come up with solutions to mitigate traffic issues, Hinkle proffered, is by working more closely with the Orange County Transportation Authority, a local agency the candidate believes is better equipped to develop new mobility options.

On the issue of whether the city should spend additional money to add more deputy sheriffs, all four noted the budgetary restrictions in doing so, but expressed a variety of ideas to accomplish such a goal.

“It’s a tough question, and we’re going to have to take a look at our budget really hard and really strong in order to establish the right answer to that question,” Coleman said.

Using the city’s homeless problem as reason for needing additional law enforcement, McLane said it would be his goal on the council to get another officer assigned to San Clemente, despite the “arm twisting” in the budget that will need to occur.

James said the city will need to a conduct a “bottom-up review” of the budget—like private businesses—to see where they can make cuts to non-public-safety items and apply those coffers to public safety expenses.

Hinkle was critical of James’ response, noting that the city is not a business. He went on to propose that the city establish its own police department rather than contracting law enforcement services with OCSD.

In doing so, Hinkle believes, the city can “get more by paying less,” as well as enforce the anti-camping laws for the homeless that OCSD is unable to enforce.

“We need to have a San Clemente Police Department that’s going save us money in the long run,” he said.

One topic all four candidates agreed on was the inherent need for transparency within the municipal government.

“I do not believe our city is transparent. I believe we have a lot of issues regarding transparency,” James said, adding that he would work with acting Mayor Dan Bane and Councilmember Laura Ferguson to improve the city’s transparency.

Hinkle said that at the moment, the city is not transparent enough. He also said the city should listen to more of its residents’ ideas.

Another idea, which Coleman proposed, was for the city to adopt more technology that’ll make it easier for the public to view records and documents on the city’s website.

Another candidate forum, hosted by the San Clemente Chamber of Commerce, is scheduled for 6 p.m. on Thursday, Sept. 26, at the VIP Lounge of the Outlets at San Clemente.

According to City Clerk Joanne Baade, the first date ballots can be mailed to voters is Oct. 7. The last day to register to vote for the Nov. 5 Special Election is Oct. 21.