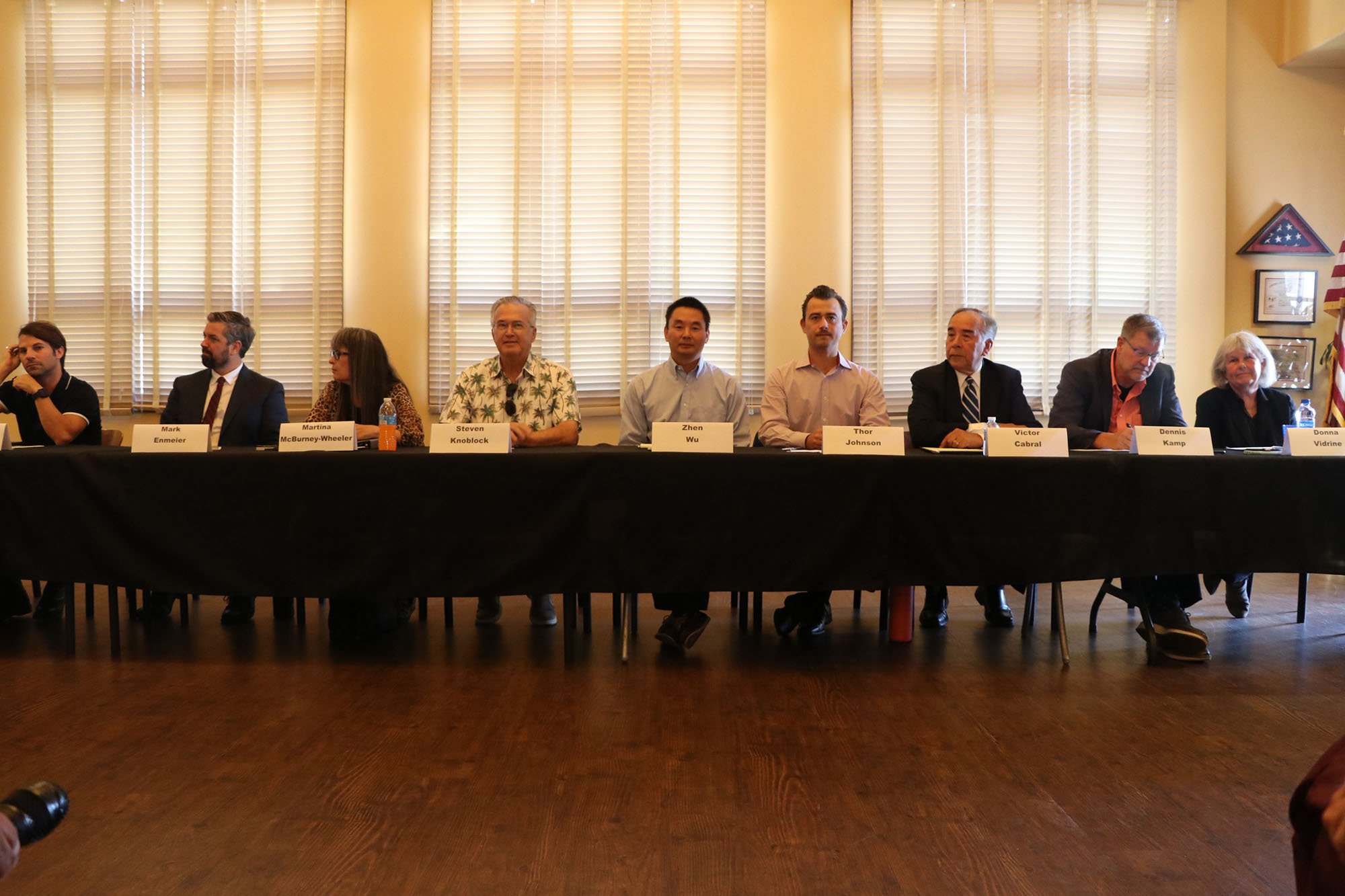 Inside the Dorothy Visser Senior Center on Sunday afternoon, Sept. 18, residents took advantage of their first opportunity to hear candidates’ opinions on pressing San Clemente issues ahead of the upcoming city council race.

Hosted by the San Clemente Historical Society, the forum included 10 of the 12 challengers vying for three open seats in November’s Municipal Election who gave their thoughts about topics such as affordable housing, the city’s remaining unfunded pension liability and public safety.

From the opening statements, the general consensus was that candidates had a vested interest in preserving the small-town community and its character, keeping beaches clean, and supporting law enforcement and small businesses.

Cabral cited 40 years of experience in public policy and governmental affairs that would help him serve San Clemente, and Kamp pledged to focus on matters important to the city, not to individuals.

“You got a lot of stuff to take care of (that requires) a lot of hard work,” Kamp said. “The council needs to work together, and frankly I think there’s a lot of bickering and a lot of catfighting going on within the city and within the council itself.”

Others stated their roles as community activists looking to make a difference.

During the forum, 12 questions were addressed, with a minute given to each contender to speak on the issue. Here’s how the candidates felt about …

Candidates commended the job Police Services and Orange County Fire Authority are doing around town, saying that the services should be fully funded. McBurney-Wheeler and Wu advocated for increasing deputies and funding so that San Clemente could be better patrolled and protected, although Washington stressed looking at the budget to do so without increasing taxes.

Johnson, Kamp, Knoblock, and Vidrine emphasized community policing and encouraging neighborhood watch groups to spring up across the city.

Enmeier said the police and fire staff did not choose their career so they could deal with issues relating to homelessness.

“We can make sure that we have resources going toward social service officers who can reach out to the homeless,” said Enmeier. “That frees up our police officers and firefighters so that they can do the job that they’ve been (assigned up to).”

Johnson mentioned providing sufficient transportation to shelters and social services, and said he would not tolerate more encampments popping up and activity in the streets, as did Cabral and Knoblock.

Enmeier, Hirschman, Kamp, and Vidrine supported local solutions, such as permanent supportive housing and working with Family Assistance Ministries and other social services.

“We need to have a plan, and we need to communicate that plan,” said Vidrine. “When I’m elected to City Council … we will not be discussing this four years from now.”

Efforts from the state of California to force cities to zone for or look for opportunities to create affordable housing were not appreciated by most candidates. Some also mentioned that San Clemente is nearly built out, and expressed concerns about preserving open space and the ability to provide housing in such an expensive area.

Candidates were supportive of encouraging residents and visitors to use the city’s trolley service, ride bikes, and walk when possible to get to Del Mar, although Wu and McBurney-Wheeler noted the issue’s seasonal nature. Kamp also noted that he’d like the city to figure out if dogs could be allowed on trolleys as well.

Cabral and Wu mentioned using vacant lots, and McBurney-Wheeler claimed that a below-level parking option would be available but has not yet been utilized.

Regarding recent efforts from the City Council to limit individual campaign contributions to a maximum $500 or $1,000 instead of the current $4,900, most said they were in favor of the initiative and maintaining transparency to residents.

McBurney-Wheeler and Washington mentioned that councilmembers should also recuse themselves from matters related to entities that helped fund their election campaign.

Kamp did not support campaign contribution limits, as he did not want the city to allocate more resources than necessary to figure out how to control contributions. He also cited the existence of Political Action Committees that could not be controlled.

Knoblock also opposed the reform, and equated the effort to limiting speech and therefore constitutional rights.

Candidates stated their campaigns have been mostly self-funded.

McBurney-Wheeler said that she’s seeking the support of the San Clemente Chamber of Commerce, as well as the Association of Orange County Deputy Sheriffs—which has already endorsed Washington. Washington said he’s also been endorsed by the Orange County GOP.

All candidates were in favor of supporting the Historical Society’s efforts, citing the organization’s preservation of San Clemente and the opportunity to show the city’s history.

What characteristics the new permanent city manager should have

Overall, candidates wanted the city manager to have extensive managerial experience, potential for longevity, trustworthiness, integrity, knowledge about managing budgets and law enforcement and to be approachable by both city staff and the public.

Wu said he only wanted to see the highest level of integrity and professionalism. McBurney-Wheeler said that the city manager should be responsive to public inquiries and adept at retaining staff.

Enmeier said there was a thin line to walk regarding keeping businesses profitable and maintaining the character of architecture within San Clemente. He added that the “unacceptable” staff shortage needed to be addressed so that the process could be sped up.

Candidates agreed that the process, which has applicants waiting for months on end, should be streamlined, and Cabral, Kamp and Vidrine suggested adding an online element.

However, McBurney-Wheeler said the process is still important and should be respectful of the city’s General Plan, as did Johnson.

If the benefits outweigh any negatives, or if ocean views aren’t sorely impacted, exemptions should be considered and conceded on case-by-case basis.

Those who cautioned against making frequent exceptions and advocated for sticking with the General Plan included Enmeier, Johnson, and Washington.

Candidates agreed that more should be done to address the significant liability, and that the city should be aggressive and creative in finding strategies that increase revenue and reduce spending.

Excess monies and other funds that can be repurposed for paying down the debt should be utilized, Cabral and Vidrine said. McBurney-Wheeler added that the city should avoid continued litigation and the use of consultants.

Enmeier and Johnson also said the city needed to properly take care of its employees.

How councilmembers should interact with each other

McBurney-Wheeler and Wu emphasized holding others accountable for their conduct, and reinstating an ethical standard for all to follow.

Knoblock, Kamp, Vidrine, Washington and Hirschman pointed to focusing on what’s best for the city and residents, and to exhibiting civility and respect that allows people to collaborate toward solutions.

All agreed that professionalism was another significant factor of a well-functioning council.

Candidates supported the city soliciting proposals from other law firms through a request for proposals (RFP) to find a way to reduce legal fees and learn if it is receiving the support that is best for San Clemente.

The next candidate forum that the Chamber is hosting will take place at the VIP Lounge at the Outlets at San Clemente from 6-8 p.m. Residents interested in attending must RSVP by registering at business.scchamber.com/events.

A recording of Sunday afternoon’s forum can be found on San Clemente Times’ Facebook page. SC Times will also attend the Chamber’s forum to livestream the event on Facebook.