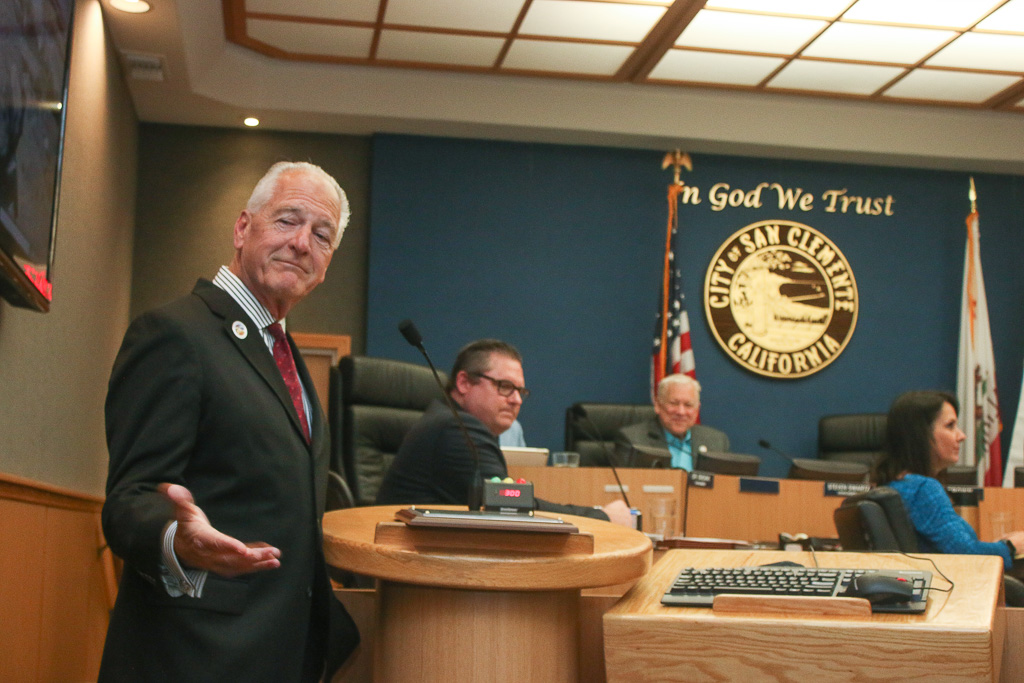 Longtime member of the Retired Senior Volunteer Program (RSVP) under the Orange County Sheriff’s Department (OCSD), Lou Leto was named the 2018 honoree for the city’s Wall of Recognition. The honor is given as a “citizen of the year” type of award.

Samantha Thomas, interim Beaches, Parks & Recreation director, said Leto is the “epitome” of what the city looks for in a Wall of Recognition honoree. Leto has been involved with the San Clemente High School’s Auto Academy and has served for years with the RSVP unit, which assists OCSD with various tasks.

Leto is currently a very active volunteer as a docent, greeter and events volunteer at Casa Romantica and had a Casa Romantica “cheering squad” with him at the council meeting, according to an email from officials at the Casa. The Casa staff nominated Leto for the award.

Lou Leto, left, accepts a plaque designating him the 2018 Wall of Recognition honoree from Mayor Tim Brown on May 15 in the City Council Chambers. Photo: Eric Heinz

Lou Leto, center, walks to the front of the City Council Chambers after receiving the honor of the 2018 induction to the city's Wall of Recognition on May 15. Photo: Eric Heinz

Lou Leto, farthest left, gives a speech after receiving the 2018 honor of being inducted onto the Wall of Recognition on May 15. Photo: Eric Heinz

“This is an award that is shared with all the volunteers in the city,” Leto said, after which he listed all the organizations with which he’s volunteered.

Mayor Tim Brown recalled a time when Leto gave him a tour of Casa Romantica in San Clemente as he awarded Leto a plaque.

“One of the things that struck me was how passionate Lou was,” Brown said. “He’s passionate about everything that he does.”

Leto’s name will be inscribed on the wall that is located within City Hall.

“I am truly humbled by the recognition by Casa Romantica, and grateful to the city of San Clemente for the recognition, and I will continue to promote volunteerism to all of the citizens to benefit our great city,” Leto said.

Since it is positive news about our city, I am available for an interview for additional coverage, should you desire.

Any San Clemente resident is eligible for the award, and people can visit www.san-clemente.org and search Wall of Recognition to nominate someone they think is deserving for next year’s honor.

An abridged version of this article will be published in the May 17-23 edition of the San Clemente Times.