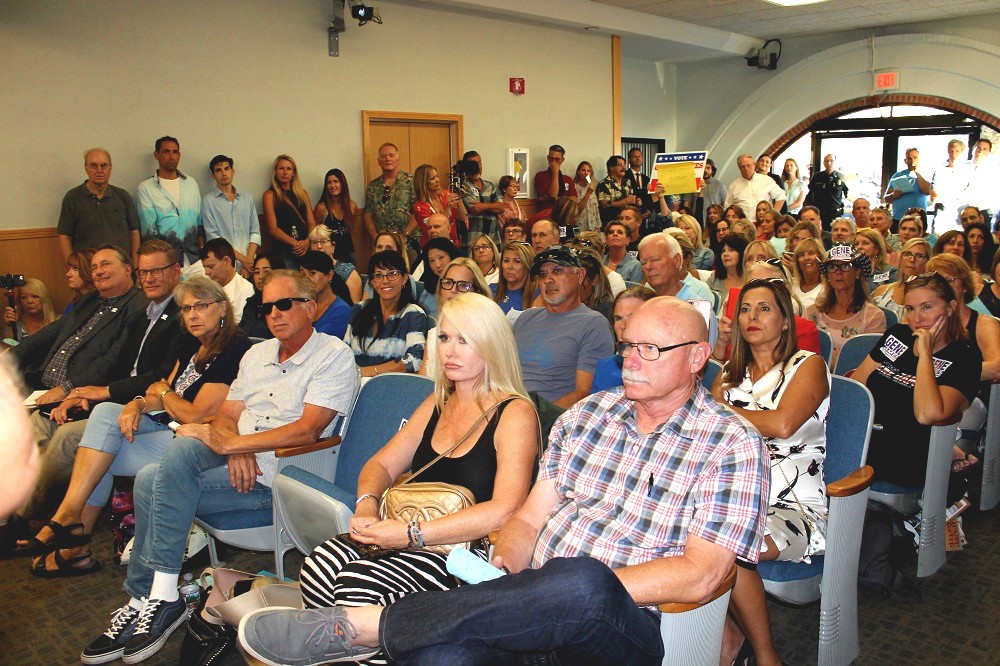 San Clemente residents and business owners showed up in number at Tuesday night’s City Council meeting, a majority of whom voiced strong opposition to the city’s consideration of leasing a property at 950 Calle Negocio for use as a temporary homeless shelter.

After hearing from a number of speakers, including Housing is a Human Right-OC supporters, the four councilmembers decided to hold a straw poll vote on the first agenda item.

The council unanimously voted to reject city staff’s recommendation for both a proposed 10-year lease for a 35-bed temporary homeless shelter at 950 Calle Negocio and a Request for Proposal for a shelter operator. After more public comments, the council took a final vote on the matter and again rejected the proposals.

According to Michael Johnston, city management analyst, staff reached out to four property owners within the city’s SB2 overlay zone shelter in the Rancho San Clemente Business Park, an area the city had designated by law for an emergency shelter. Only one responded, and the property owner’s terms included a 10-year lease agreement for $1.14 million, with the total cost including a 3% annual increase, Johnston said.

However, City Manager James Makshanoff, who has had ongoing talks with the Orange County Sheriff’s Department, said that even if the proposed shelter housed 35 of San Clemente’s reported 96 unsheltered individuals, it was still unclear whether Sheriff’s deputies would enforce the city’s anti-camping ordinances, which prohibit people from camping in public places.

“Their feeling is that if we want enforcement of our camping ordinance, then we need to be Martin v. Boise-compliant,” Makshanoff said.

Yet, Makshanoff said Martin v. Boise is vague on the issue, and he echoed a majority sentiment that the Sheriff’s hands are tied due to lawsuits in North and Central County with homeless advocates.

Because enforcement is “up in the air” even with a shelter, Makshanoff said, “It is difficult on my side of the dais here to recommend approval of the lease for 10 years.”

Many residents expressed disapproval of the shelter idea, saying it would be expensive, bad for business and that “housing first” is not the right approach to address homelessness.

Others pointed to the County of Orange to step up and direct its financial resources toward a countywide solution.

Bane said he and the council take the comments to heart. “We do want to do something for our homeless from San Clemente—that have ties to San Clemente—but the state of the law is such that we cannot guarantee that if we open a shelter, like Tustin or others, that we can limit it to the folks that we are responsible for, so that’s the basis for the decision tonight. We are going to work towards getting to a definitive point where we can control the problem, address the problem on a regional basis, so that we do not become the regional clearinghouse for all of the homeless in Orange County.”

The San Clemente City Council also voted to table an agenda item initiated by Councilmember Laura Ferguson that would have established a standing committee on homelessness.

The next City Council meeting is scheduled for Tuesday, Sept. 3, at 6 p.m.