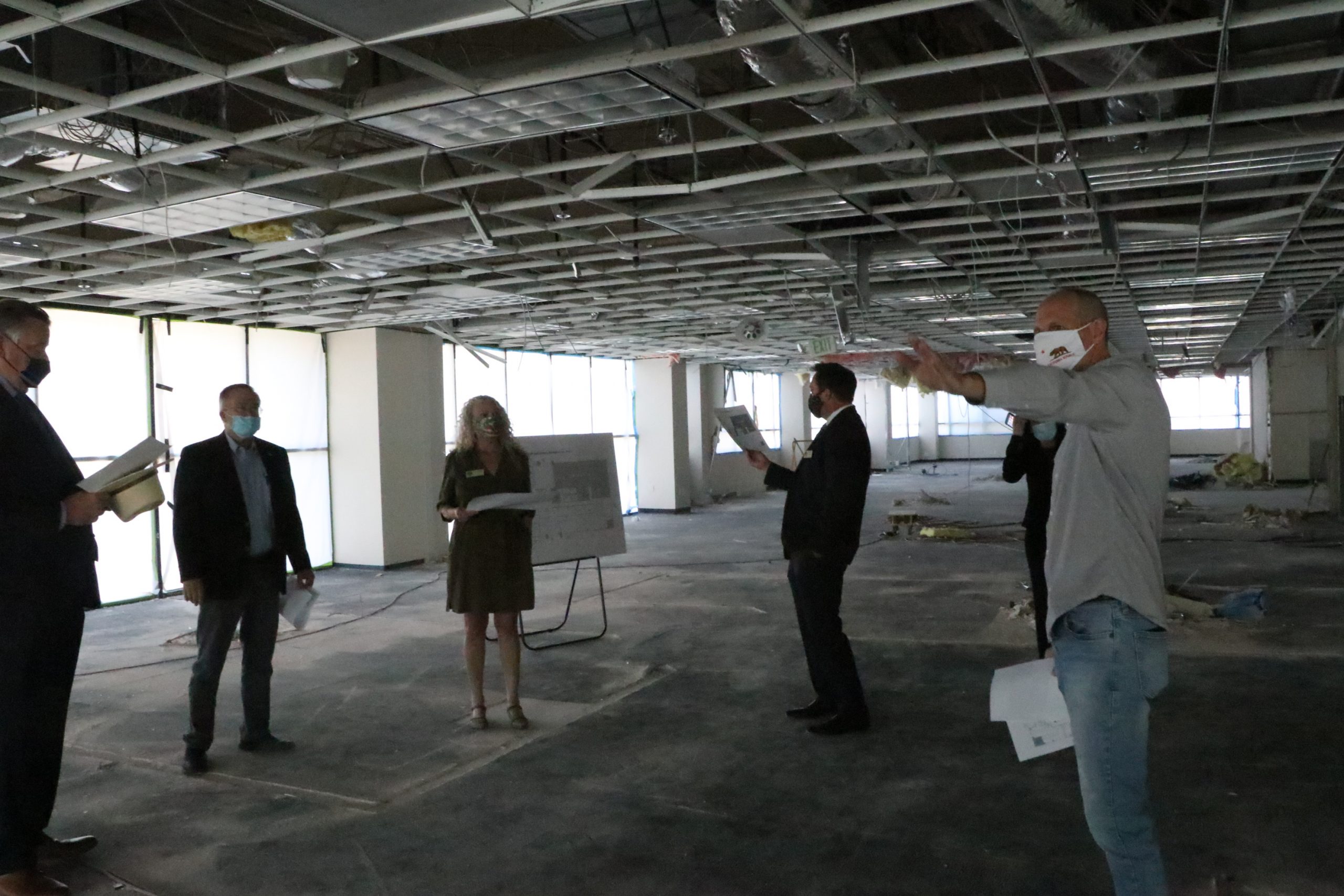 When the city’s new police services substation is completed this summer, it will be the “crown jewel” for the Orange County Sheriff’s Department’s contract cities, San Clemente Police Chief Edward Manhart said.

“So once this is done, this will be the crown jewel, in my opinion, for contract cities,” he told San Clemente Times on Tuesday, Feb. 23, when the city held a groundbreaking ceremony to give city councilors a sneak peek of the space’s layout.

“The way we designed and worked with the city, our project managers, this is going to be a great place for deputies,” Manhart continued. “And that’s what I want, to attract deputies to come out from the jails to come do operations here. I think this is the best start.”

The roughly $3.5 million project to renovate the second floor of the San Clemente City Hall building on Calle Negocio is currently in the demolition phase, according to Public Works Director Tom Bonigut.

“The entire floor has been demolished, and then we’re going to rebuild back about three-quarters of it,” Bonigut told city officials, including all five members of the council, noting that the rest of the floor is earmarked as future office space for the city.

“Right now, we’re about hallway through demolition. Expect two more solid weeks to get all the overhead ceiling and infrastructure, and then we’ll start framing walls and put in new plumbing and all the support work,” Bonigut further explained. “Our overall schedule is to be move-in-ready by end of June.”

Once complete, the sheriff’s deputies assigned to San Clemente will have a new local headquarters with about 12,000 square feet of space—a step up from their previous digs on the bottom floor of the old city hall building on Avenida Presidio.

“At Avenida Presidio, we had about 8,000 square feet-ish. This is a total of 12,000, so it’s really nice that we won’t be sitting on top of each other; everybody’s offices will be spaced out,” Manhart said, adding: “The deputies are going to be so excited about being a part of this.”

The station is set to include office space, storage for equipment, men’s and women’s locker rooms and bunk rooms, as well as a fitness center that both OCSD personnel and city staff can utilize.

“We worked very closely with the sheriff’s department and their designers to figure out their space needs, not only currently but future furnishings, so they completely bought into the floor plan,” Bonigut said.

The local deputies have been without an official substation in San Clemente since May 2019, when OCSD personnel evacuated the Presidio building because asbestos was discovered by workers during an on-site construction project. Since then, OCSD staff and deputies have been working out of the Aliso Viejo Substation.

Manhart said that after a couple of months, he asked the city to set up an office for him on the third floor of the city hall building so he could be reconnected with city management and councilors, rather than only being available by phone.

“So that has helped bridge the gap, but it’s really shown me the importance of having the staff all together in one building,” he said, before reiterating his point. “Putting us back here is completely perfect—to put us all back to where we should be. It’s much better, much more cohesive to work together.”

Plans to begin designing the new substation space originated a year ago this month, when the council at the time approved the proposal by Councilmember Gene James, currently serving as mayor pro tem.

On Tuesday, he said he was “absolutely ecstatic” with the project moving forward.

“This is what we were aiming for the whole time,” he said. “So, this is going to have great results; the sheriff’s department played an active role in the design. This is a blank slate, and we gave that blank slate to the sheriff’s (department), and I think it’s going to be a great thing.”