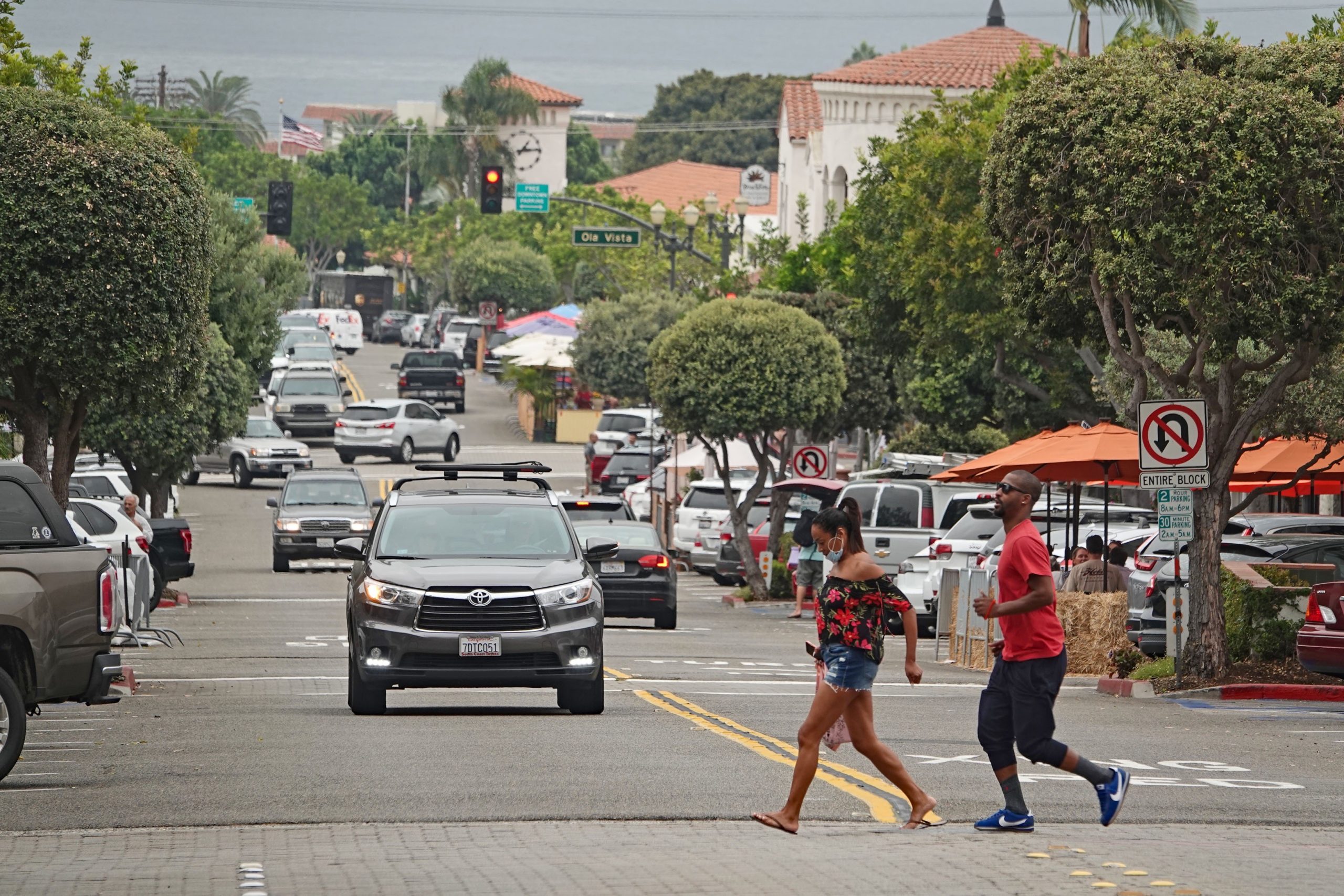 A proposal to temporarily reconfigure Avenida Del Mar into a one-way street will not move forward, as city staff found the concept wouldn’t recapture parking in the downtown corridor, nor would it help to maintain the open-air dining services currently allowed on the street.

The city council on Tuesday, Oct. 6, decided not to pursue the plan that would have temporarily converted the 100 and 200 blocks of Del Mar into a one-way road with traffic flowing east toward the Pier Bowl.

Had the council voted to approve the reconfiguration, it would have necessitated deciding between one of two scenarios: leaving the diagonal-striped parking spaces as is, requiring motorists to back into spaces on the left side of the street, or repainting the spots so drivers could park head-on in either direction.

The cost to remove the double-yellow centerline along Del Mar but not repaint the left-side parking lines would have been about $56,000. The plan to modify the diagonal spaces was estimated to cost about $71,000, according to the city. Both estimates, the city added, included initial installation and eventual removal to convert the street back to a two-way thoroughfare.

Acknowledging that the “temporary conversion may not be practical,” the city in its report to the council stated that the realignment didn’t meet the council’s goals of maintaining on-street dining and recovering additional parking.

According to the city, the concept would have created a drive aisle of 20 feet, leaving 16 feet on both sides of the street for parking and an additional 4 feet of new usable street space. However, the city found that the additional 4 feet “would not meet the needs of most restaurants—especially those with constructed platforms.”

“Additionally, an unbroken stretch of narrower dining adjacent to the curb would create challenges for visitors to exit their cars and cross through dining areas to get to the sidewalk,” the city report stated.

This past August, when the council voted to expand its assistance program to support local businesses during the pandemic, Councilmember Chris Hamm suggested the one-way concept be brought back to the council for consideration. Hamm on Tuesday said he proposed the plan to see whether it would further complement the assistance program.

“I brought this issue up a couple of times, I think, over the past six months in terms of making the downtown (area) more accessible, more business-friendly during this COVID emergency that we have going on right now,” Hamm explained.

But based on the city’s findings that a reconfiguration of the street, while only temporary, wouldn’t accomplish the intended goals, Hamm and the rest of the council agreed not to support it.

Instead, Hamm said he would like the city to turn its focus toward another business assistance proposal that had been put on the backburner this summer amid a spike in coronavirus cases: a once-a-week closure of Del Mar to create a downtown promenade.

“So, while the one-way doesn’t achieve that goal or help us in other areas, I think there’s an opportunity for us to take a look at another option, which would be the Sunday afternoon promenade,” Hamm said. “Instead of, or in lieu of doing the one-way, I think we should have another look at that one.”

The San Clemente Downtown Business Association and the city have been working the past few months to bring the Sunday street closure on Del Mar to fruition. DBA Board Chairman Chris Aitken wrote in a column for San Clemente Times late last month that the concept is in the final stages of planning and could be implemented later this month.