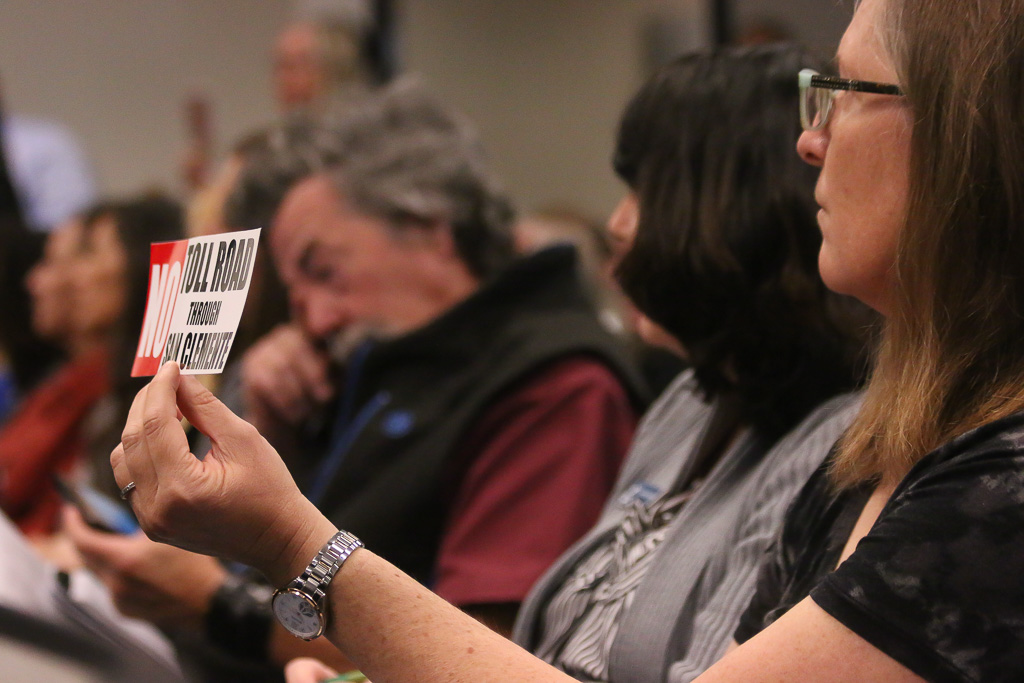 Gathering support against The Toll Roads from as many of its residents as possible was the city of San Clemente’s goal on Thursday, April 18, when it released a letter template for residents to fill out, sign and deliver to Assembly Member Cecilia Aguiar-Curry, D-Winters, the chairperson of the committee on Local Government, and other legislators.

The committee is expected to hold a hearing on the latest bill, AB 1273 authored by Assembly Member Bill Brough of Dana Point, related to the Transportation Corridor Agencies (TCA) on Wednesday, April 24, that would essentially strip the agencies of their authority of creating new toll roads and would require the agencies to pay down the debt of the roads, estimated by city of San Clemente officials to be about $6.4 billion, and make the roads free to access.

The letter, which is more than 1,100 words long, outlines what the city claims are deficiencies in funding and insurmountable debt leveraged on its residents in the effort of continuing a route through or near San Clemente.

Representatives on the TCA board from San Clemente tried their own method of stopping the agency from going forward with its planned toll roads by introducing an action at the April 11 joint board meeting that would freeze all procurement efforts for projects until a third-party audit is completed, but the motion failed to gather enough support.

The request for an audit came on the back of a Los Angeles Times article in March that reported, based on financial documents provided by the city of San Clemente, the TCA was being billed by its outreach and marketing contractors for $185 an hour in some instances, which included reading and monitoring news reports about the TCA. That money comes from development fees in its member cities.

On Thursday, April 17, TCA board chairs Christina Shea and Fred Miganar released a statement regarding the vote of the board.

“We respect and acknowledge the discussion at the April 11 Boards of Directors meeting and appreciate the Boards’ opposition of AB 1273, which would bring to a halt more than $3 billion in planned TCA projects and injects chaos into Orange County’s ability to maintain and improve its highway system,” the statement read, adding that the TCA has invested $4 billion in projects accounting for 20 percent of the county’s highway system. “Orange County’s Toll Roads are often the only congestion-free options to get home to family or make it on time to early morning appointments. We sincerely appreciate our 325,000 daily drivers and 1.5 million accountholders who see and experience the value of time savings by driving The Toll Roads.”

Since 2015, the TCA has proposed constructing new roads through or around the city after conducting consensus studies with the public. San Clemente officials said there was not enough input about where to put the roads. These strategies go back to as far as at least 2003 when the TCA proposed flyover highways through the southern and eastern portions of the city, and plans to construct through Trestles surf area were shot down in 2015 by the San Diego Water Quality Control Board.

Currently, TCA is looking at eight different toll road proposals: One that would go from the end of the 241 Toll Road through San Clemente and end at Pico, a process that would likely have to go through eminent domain proceedings. Another splits two routes in the Shorecliffs area, and one would stop at La Pata but expand the lanes on I-5.

Letters to the chairperson need to be submitted to the legislators by Tuesday, April 23, the city stated in its press release.