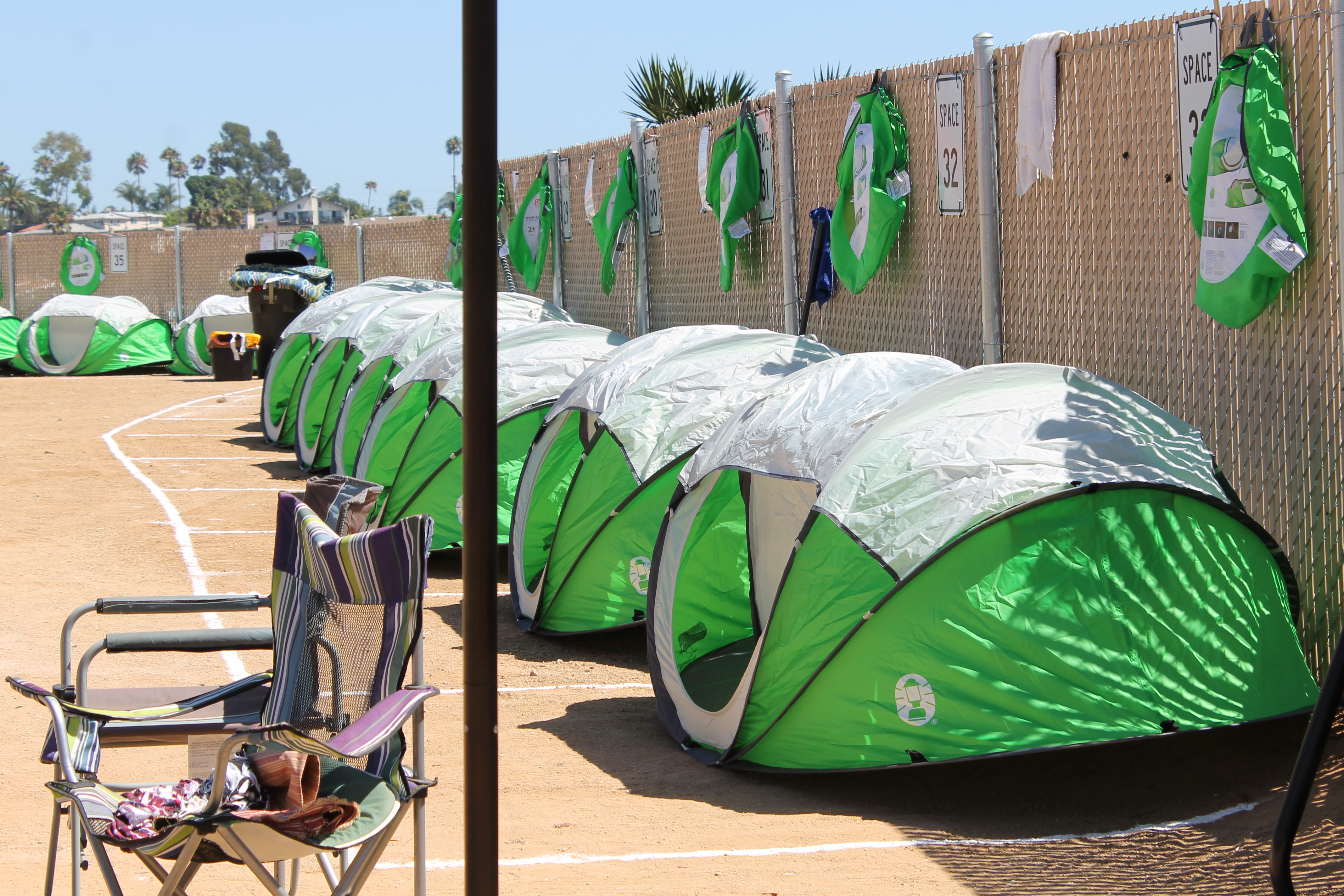 As of that day, Sund said there were 27 campers staying at the city’s designated lot in which homeless people have been permitted to camp.

Sund credited the city and Mercy House for helping a homeless husband and his wife, who was nearly five months pregnant, and getting the couple out of the campsite and into a shelter for families.

The city conducted a cleanup operation at the camp on Friday, Aug. 30, and under new regulations, only allowed campers back in who have residential ties to San Clemente. People must provide documentation such as an identification card, utility bill or high school diploma showing how they are connected to the city.

The city also provided its own tents to create uniformity and minimize trash at the site, and it only allowed campers to bring in what they could fit inside a 65-gallon trash can.

At the Council meeting, Sund said, “We are working very diligently with county health and mental health and Mercy House on a daily basis, going out and trying to touch every camper to find out if there’s services they can take.”

Sund commented that the city has been seeing “numbers diminish” at Pico Park, across the street from the campsite, where residents had complained of homeless people who were refused entry at the city lot and had been lingering.

The assistant city manager thanked the Orange County Sheriff’s Department for dealing with a number of issues at the campsite and Pico Park.

City staff are doing property retrievals once a week for homeless campers who had stored belongings with the city. Anybody who has property stored can come to the security tent, and the city will process getting their belongings back, Sund said.

A local resident, Bill Kreutinger, said he was made aware of potentially dangerous temperatures inside the city-provided tents at the homeless campsite, so he decided to investigate and see what he could do to help solve the problem.

Kreutinger, who works in the electronic industry, said he used a temperature and humidity evaluation board inside one of the tents and began tracking data in early September. On three consecutive days, he found temperatures rose to over 120 degrees inside the tent.

“Over the following several days, I found dangerous temperatures every day,” said Kreutinger, who was trained in combat medic school in dealing with heat-related injuries. “Anything over 110 is extremely dangerous.”

Kreutinger had reached out to the city, but he was told by the city manager that they didn’t plan to do anything.

Frustrated by the response, Kreutinger decided to put something together himself, within the rules of the campsite, to address the hot temperatures. He built a portable temporary canopied shelter and solar-powered evaporative cooler that would cool a 500 square-foot area.

However, he said the city did not allow him to set it up, and he was told the city council would need to approve it first.

“I tried for four consecutive days to get this in,” Kreutinger said. He said he also talked with the homeless task force for the state and county, who thought it was a great idea, as did Councilmember Laura Ferguson.

Kreutinger was told canopies were not allowed at the campsite, because they obscure security cameras that are constantly monitoring the campers, though security personnel have a canopy.

“My goal is just to help alleviate a dangerous condition,” Kreutinger said. He offered to just bring in the cooler and walk it around from tent to tent for campers to use, but he said the city prevented him from doing that.

“It’s been a really frustrating situation,” he said.

Kreutinger said he’s comforted that temperatures over the last week haven’t been as hot, but he is concerned there might be another spike in temperatures before winter sets in.

“I would really appreciate being able to set it up if it looked like it was going to get hot,” he said. “Just knowing that if it gets hot again for the next month and the city won’t do anything, and I can’t do anything to help, is troubling.”

In an email to the San Clemente Times, Kreutinger said, “There are people here with physical and mental disabilities that may prevent them from taking self-preservation measures in extreme heat. The temperatures inside the tents regularly exceed 120 degrees, placing anyone inside at serious risk of dehydration and heat injury.”

Editor’s Note: An abridged version of this story was published in the Sept. 26 edition of the San Clemente Times.