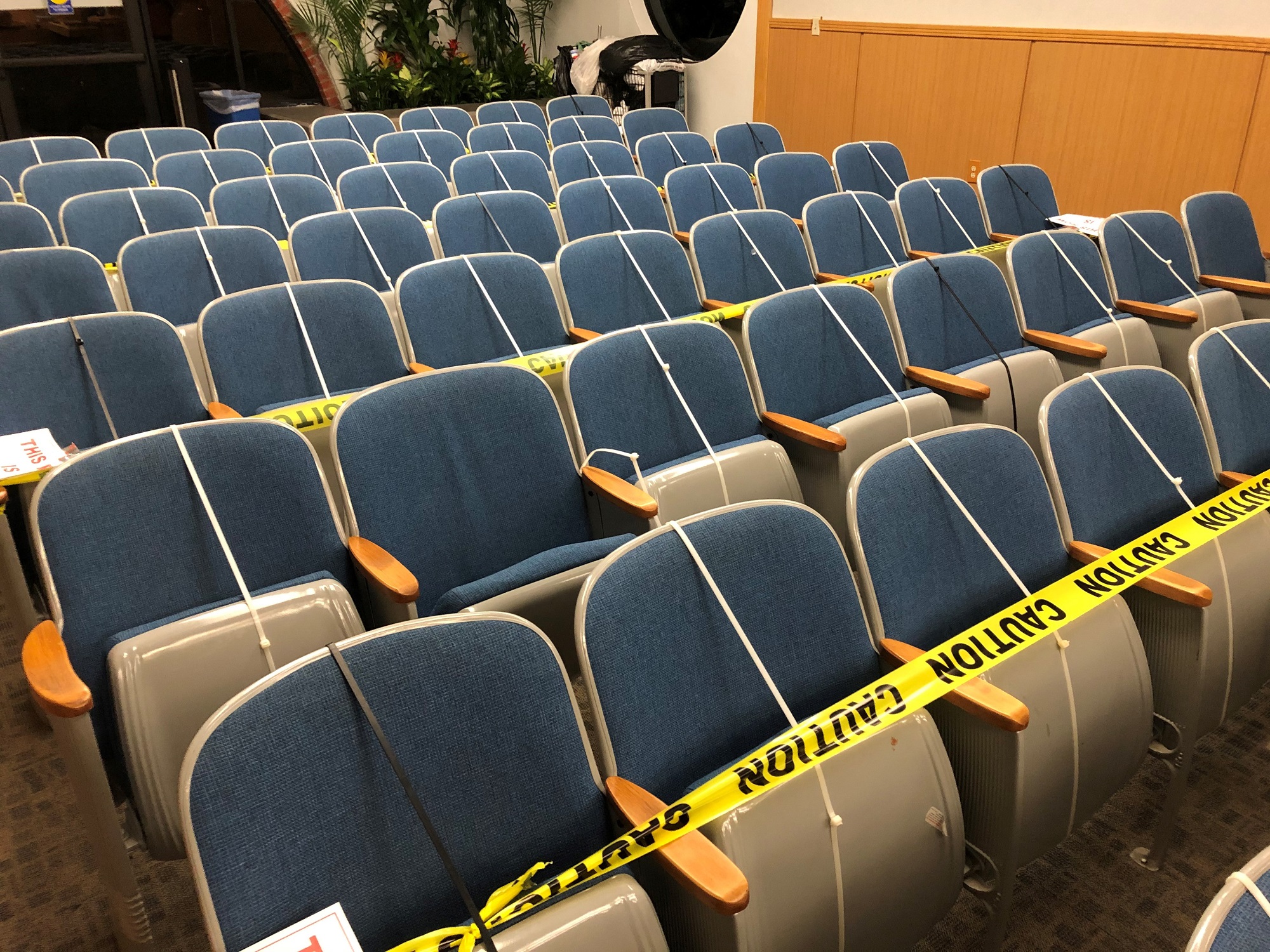 The city’s intended plan to resume in-person council meetings, with the public present, at the San Clemente Community Center this week has been put on hold, as some councilors have privately expressed concerns over the endeavor to interim City Manager Erik Sund.

Near the conclusion of the council’s last meeting on Aug. 18, Sund announced that city staff had been working to relaunch in-person council meetings by staging them in the auditorium of the community center.

“We are shooting for the first meeting of September to facilitate for the council to meet in person,” Sund said, eliciting praise from acting Mayor Laura Ferguson who has staunchly advocated the city bring back in-person meetings for months.

However, after that announcement, Sund told San Clemente Times in an email Thursday, Aug. 27, that “multiple City Council members reached out to me and raised health concerns in regards to returning to in-person City Council meetings.”

Citing privacy issues, Sund wouldn’t disclose which members he spoke with nor what medical concerns they raised.

He went on to state the city will continue holding the Zoom meetings because it didn’t have the capability to simultaneously conduct an in-person meeting for councilmembers present and a virtual one for those who can’t attend.

“Currently, the City lacks the necessary tools to accommodate a hybrid meeting of both in-person and virtual participation,” he wrote. “The City is researching options, but in an effort to maintain continuity of City operations, the City Council will continue to conduct their meetings via Zoom.”

The change in direction from Sund has drawn criticism from Ferguson who took to her political Facebook page last week to share with her constituents an email she had sent to Sund. In the email, she outlines her objections to the decision and implores him to stand by his initial plan.

“The decision was already made on August 18th to have the next council meeting at the community center with members of the public and we can take steps to ensure those two members who now object due to ‘concerns for their health’ can call in or participate via Zoom,” she wrote in her Aug. 26 post. “No one should be anywhere they do not feel comfortable being and we should accommodate them accordingly.”

Ferguson also noted that none of the councilmembers had openly objected to the plans the night of the announcement earlier this month. She also raised the concern of councilmembers making city decisions “in the shadows.”

“The decision was made and approved without objection by any councilmembers,” Ferguson said. “They don’t have a right to change the decision made at the last Council meeting by redirecting policy in the shadows away from public view nor do you have a right to unilaterally make this change.”

This past June, when councilors discussed amendments to the proclamation that declared a local emergency from the pandemic, they voted to give the city manager and staff authority in loosening restrictions without council consent—but not tightening them—whenever the governor moved the state into another stage of his phased reopening plan.

A previous practice during the pandemic was to have the council lift restrictions based on state guidelines and the phased reopening. The purpose of the June 2 vote was meant to not delay the reopening of economic sectors and public facilities should a state announcement be made several days before a scheduled meeting.

As of this posting, Sund had not responded to SC Times’ question of whether the June 2 directive applied to his reversal after having already announced the in-person meeting.

Councilmember Gene James on Monday told the SC Times that he was not one of the councilmembers who voiced concern. He also noted that he’s continued participating in the council meetings over Zoom while sitting on the dais in council chambers.

“As a matter of protest, I go to council chambers every meeting and that’s where we should be,” James said.

Councilmembers Kathy Ward and Chris Hamm did not respond to requests seeking comment for this story on Monday.

The city last held an in-person session with residents present back on March 17. During that meeting, the city limited seating inside the council chambers while Ferguson was the only councilmember physically present. Her colleagues, including then-Mayor Dan Bane, participated via teleconference.

By the following session in early April, the city switched completely to teleconference meetings, instructing residents to view the meetings through the city’s YouTube channel as members of the public were prohibited from attending in person.

Staff and few councilmembers, however, were permitted to be present inside the chambers during those meetings. That practice had continued for a short while until late May when then-interim City Manager Robert Dunek closed council chambers completely, instructing both staff and councilmembers to participate over Zoom—an act that prompted a sharp rebuke from Ferguson.

The move had come following the early-May meeting when Ferguson, Hamm and James showed up to city hall to attend in person.

Sund at the time explained that the decision was made to be consistent with county and state guidelines on social distancing. He had said the layout and size of the council chambers made it difficult to enforce those guidelines with more councilmembers trying to attend in person, with staff also present.

Discussions on moving council meetings to a large enough venue where the city could accommodate councilors, staff and the public with social distancing guidelines started as far back as May, when Sund had told the SC Times that alternatives were being explored.

The first night councilors had met over Zoom, on May 19, they reached an impasse over a proposal to begin convening the meetings in person again, with Ferguson and James favoring the idea while Hamm and Ward opposed it.

The council’s meeting Tuesday night will be conducted via teleconference and livestreamed to the public, which can view the meeting on the city’s YouTube channel, starting with the closed session at 5 p.m. and public session at 6 p.m.