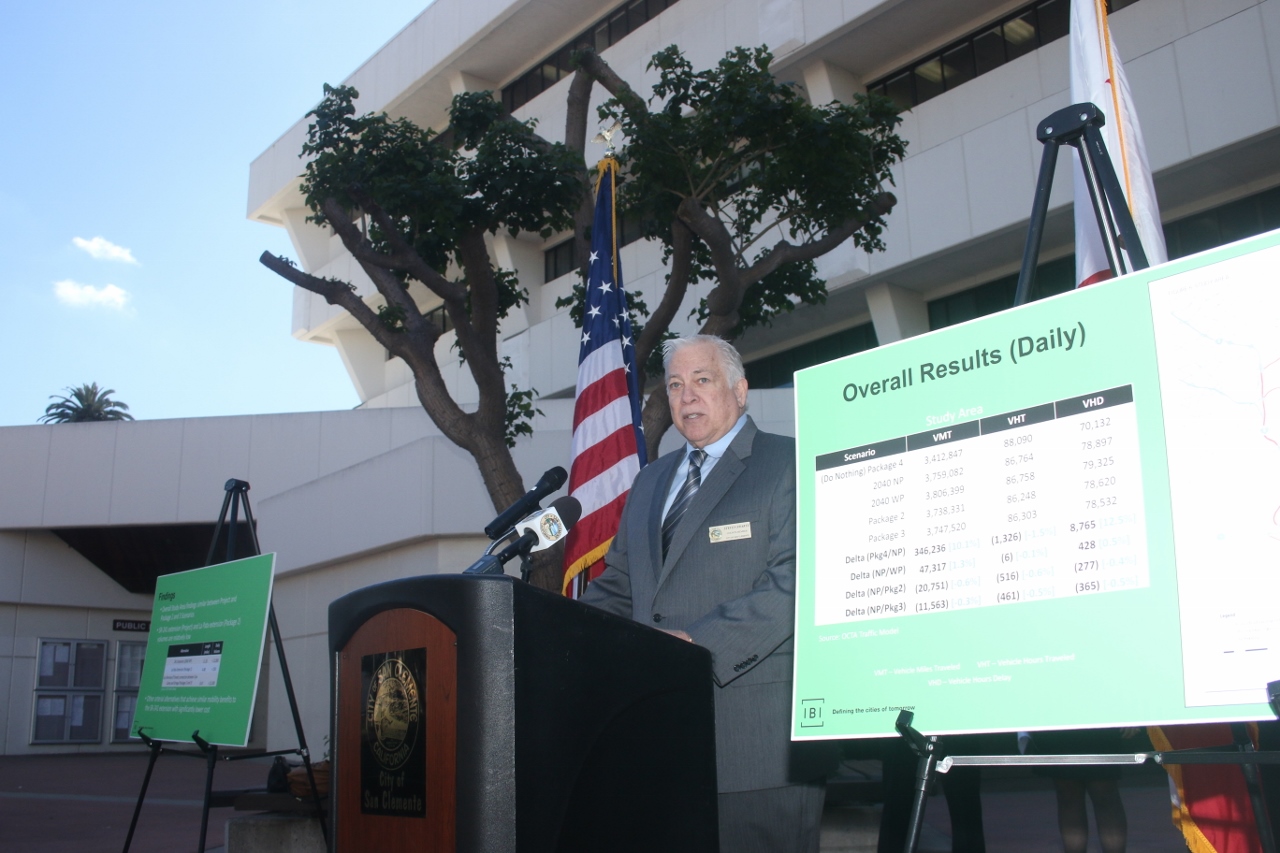 SANTA ANA—Flanked by two billboards in the courtyard of the Orange County Hall of Administration in Santa Ana, San Clemente City Council members presented the findings of a traffic study that claims extending the 241 toll road through the city would have the same effect as completing arterial highways—arguing that the toll road extension is unnecessary.

A press conference regarding the study was held on Thursday morning, March 1 in regard to the study of the roads proposed by the Transportation Corridor Agencies (TCA) the administrator of The Toll Roads.

IBI Group, the planning, engineering and technology firm hired to conduct the study, used data from Orange County Transportation Authority (OCTA) traffic studies to compile four packages, or possible outcomes, from the TCA’s proposed routes as well as the OCTA plans and Measure M-funded projects. The study examined vehicle miles traveled, vehicle hours traveled and delays. All of the packages except the fourth, which is to do nothing and just let the OCTA projects continue, showed data that represented similar effects.

The different packages looked at various scenarios in which the toll road connects to the 5, is never built, roads are constructed following the OCTA Master Plan of Arterial Highways (MPAH) and a combination of the scenarios.

Mayor Tim Brown led the press conference and was accompanied by David Chew of IBI Group, San Clemente City Council members Kathy Ward and Steve Swartz as well as Mark McGuire, a San Clemente resident and land use attorney who has been working with the city on toll road issues.

“The general trend (was) that between the packages as well as the project, we were observing very similar results in terms of (traffic alleviation),” Chew said during the press conference. “Along the key corridors, we found that the volumes for the 241 extension, the project, and the La Pata extension from package two, were relatively low, coming out to be less than 12,000 trips on the 241 extension and less than 250 trips on the La Pata extension.”

Chew said the Los Patrones (F Street) connection from Oso Parkway to Ortega Highway would be less than 21,000 trips per day, which means there are alternative methods to alleviating traffic in South Orange County that won’t cost as much as constructing a toll road.

In a press release, the city quoted Mike Arizabal of IBI Group stating that completion of the MPAH would be better for traffic alleviation and cost much less.

“The TCA has not built any new roads since 1996,” the city’s press release stated, “existing solely to continue to collect development fees, to manage the existing roads, and to propose new toll roads to justify the TCA’s continued existence while spending millions to battle Orange County residents and other stakeholders who oppose TCA projects.”

Mayor Tim Brown speaks at a press conference about the city's traffic alleviation study that was introduced on Thursday, March 1 in Santa Ana. Two construction workers who paused for the speeches are reflected in a cellphone. Photo: Eric Heinz

Kathy Ward speaks during a press conference on Thursday, March 1 in Santa Ana. Ward is the city of San Clemente representative on the TCA's Foothill/Eastern Transportation Cooridor Agency.

David Chew of IBI Group speaks on Thursday, March 1 in Santa Ana about the study his company conducted for the city of San Clemente. Photo: Eric Heinz

The release continued by claiming the toll roads through San Clemente would not benefit any Orange County residents but would service Los Angeles-to-San Diego commuters.

The study was intended to examine possible toll road that would continue south and connect to I-5. It did not consider the proposed route that was introduced by the TCA in February that connects the 241 to La Pata and adds lanes to the highway between San Clemente and San Juan Capistrano.

“What I heard from the traffic engineer this morning confirms what many of us have thought and suspected, that there is simply no basis for the TCA to blaze a toll road through San Clemente’s protected open space and very near homes and schools in order to connect the 241 to the I-5 in a location never planned,” McGuire said at the press conference. “I look forward to diving into the details of the IBI study.”

McGuire asked county and traffic officials to take the study results to heart and to seek alternatives to the current proposals.

The study showed doing nothing would create longer hours on the road for motorists but would not cause as many delays as the toll road proposals. The study also used projections for the year 2040 related to population growth estimates.

San Clemente has been fighting the notion of a toll road through its city for years. The proposed toll roads that go directly through the city have caused the most recent uproar. The TCA is studying eight possible traffic alleviation ideas, five of which are toll roads and three other are optimizing existing routes.

The study was commissioned by the San Clemente City Council in July for $89,000 and $102,000 for Englander Knabe & Allen for strategic planning services to combat the 241 extension.

How the city of San Clemente calculated a $2 billion price tag for the proposed toll road is a bit theoretical. The city assessed the $100 million to $1 billion estimates presented by the TCA in 2016 for the toll road proposals as well as interest from bond debt as the factors driving the cost. The city was also critical of the debt already accrued by the TCA from bonds to build the existing toll roads.
“If you take what TCA has spent previously for the length of the roads that they’ve done and factor in current costs, what it takes to build a road now, $2 billion is the estimate,” Ward said.

As the toll roads are still going through environmental studies and a draft report has not yet been published, it’s difficult to say definitively how much the toll road will cost.

“None of that has been considered, and there isn’t a figure associated with that,” said Nico Melendez, a spokesperson for Venture Strategic, which represents the TCA for public information.
In a prepared statement, the TCA responded to the city’s report.

“Everyone knows there is a worsening traffic problem on I-5 in South Orange County,” the TCA’s statement read. “According to OCTA, traffic delays are expected to increase 66 percent by the year 2040. 78 percent of South Orange County residents believe doing nothing is not an option.”

The statement went on to blame San Clemente City Council for not “taking responsibility” for future planning and that the TCA would continue its mission to study and provide traffic alleviation solutions.

On Thursday evening, Melendez distributed a press release in response to the city’s study, which can be read by clicking here.The release stated that the SR-241 extension that was studied isn’t applicable as it was nixed in a settlement agreement between the TCA and the Save San Onofre Coalition, a collection of environmental organizations that have fought to keep toll roads from being built through Trestles in South Orange and North San Diego counties.

“Traffic results are presented in the IBI study as Average Daily Volumes (ADTs) and do not illustrate critical daily and weekend peak hour congestion levels regularly experienced in south Orange County,” the release stated. “Caltrans, the agency providing independent oversight of the South County Traffic Relief environmental study, has a policy to study, analyze, and design for, the recurring peak conditions of traffic congestion.”

A full explanation of the report will be given at the Tuesday, March 6 City Council meeting, which takes place at 6 p.m. at City Hall at 100 Avenida Presidio.