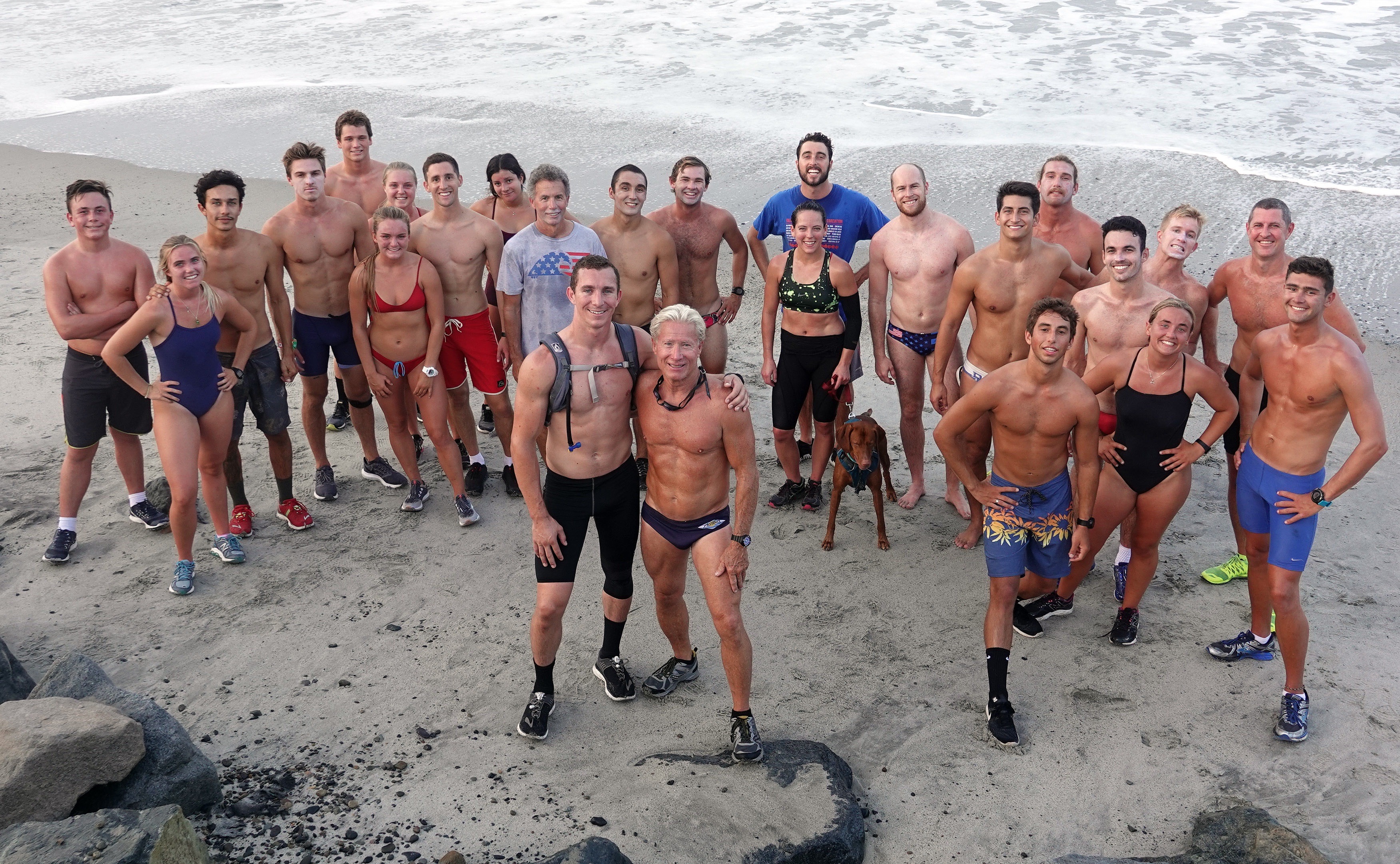 Coast Trek: To Boldly Go Where Few Have Gone Before

On the first Tuesday of every August, off-duty lifeguards gather at the end of the San Clemente Pier at 6 a.m., tapping the end railing, then jogging toward shore.

Wearing only running shoes and a swimsuit, they set out to explore the Orange County coast in a way that few humans ever do.

They jog and hike from beach to beach, rounding rocky coves and headlands either on foot or by swimming. A support crew delivers nourishment at rest stops.

Usually 8-9 hours after departure—sticking together, since this is about camaraderie; it isn’t a race—the group will tap the railing on the outer end of Newport Beach’s Balboa Pier. Then everyone will celebrate with an ice cream.

Another “Pier to Pier Quest” is in the books.

Larry Moore, a former San Clemente city lifeguard, started the yearly tradition in 1992 with distance-running pals Dan Sforza and Rick Delanty. The Quest, by word of mouth, has grown.

Former Ironman triathlete Moore, now 66, has retired. Steve Ayers, a 58-year-old San Clemente State Beach lifeguard who has done the Quest all but two of the years, has kept it alive.

“All of us were Ironmen and had competed against each other,” he said. “(We) wanted to come up with an event where we actually had to work together to get to the other end. The rest, I guess you could say, is history.”

This year, 24 off-duty lifeguards who work for San Clemente State Beach, San Clemente City, Orange County, Huntington Beach and Lake Mission Viejo experienced the nooks and crannies of the coast together, joined by two civilians. The Questers ranged in age from teenagers to seasoned waterman Ayers.

Two Questers went out on their own, enduring the 27-mile distance on paddleboards, laboring against headwinds and wind chop. Rubber-armed by the end, they finished at a different location, inside Newport Harbor.

The running, swimming Questers had to negotiate their own sketchy situations—strong currents and waves bashing into sharp rocks.

“I told the guys at the end that this is the best single day of lifeguard training you’ll ever experience,” Ayers said. “You learn how to rescue people in the worst situation when you’re on a dangerous reef with waves coming. We’ll get nicks and cuts, but we won’t get killed.”

One year, Ayers recalled, Questers actually did encounter some kids who had found themselves pinned up onto rocks by a rising tide in a remote location. The off-duty lifeguards paused their journey to deliver the frightened kids to safety.

This year’s Quest was a tough one, especially in rocky coves and rounding rugged promontories.

“I did go through the cheese grater a couple of times,” Ayers said.

Arriving at Crystal Cove, virtually everyone was cramping up. “Instead of looking like happy, fit lifeguards, we looked like a motley crew,” Ayers said. “My hat goes off to them. It’s toughest for the young ones. They don’t know what to expect.”

One participant had to halt at Crescent Bay, and another, evidently having pulled a muscle, had to be assisted the last couple of miles to Balboa Pier—a bonding episode for the Questers.

“At the end, we all tap the pier and yell out, in unison: ‘Lifeguards!’” Ayers said.

Anyone inspired by the Quest is invited:

TRY ANY OF THESE ON FOR SIZE

One year, lifeguard Chris Coy did the Quest backwards, heading down coast in the dark and hooking up with the northbound Questers, surprising them at Dana Point, joining them to trek back to Newport Beach.

Several Questers have done what they call a Super Quest—the entire OC coast from Trestles to Seal Beach.

Coy once completed an ultra Quest from the Mexican border to the San Clemente Pier, persisting from 9 p.m. one night to 7 p.m. the next day, for charity. Fellow lifeguard Wes Hatfield made it most of the way, until his knee gave out.

In the offseason, some lifeguards go dog sledding and snow camping in the Eastern Sierra.

Another lifeguard favorite is to paddle a borrowed outrigger canoe to Catalina Island and back.

Lifeguard Dan Sforza, a Quest co-founder, has hiked the Pacific Crest Trail and ridden a bicycle across the United States.

Letter to the Editor: We Deserve Better