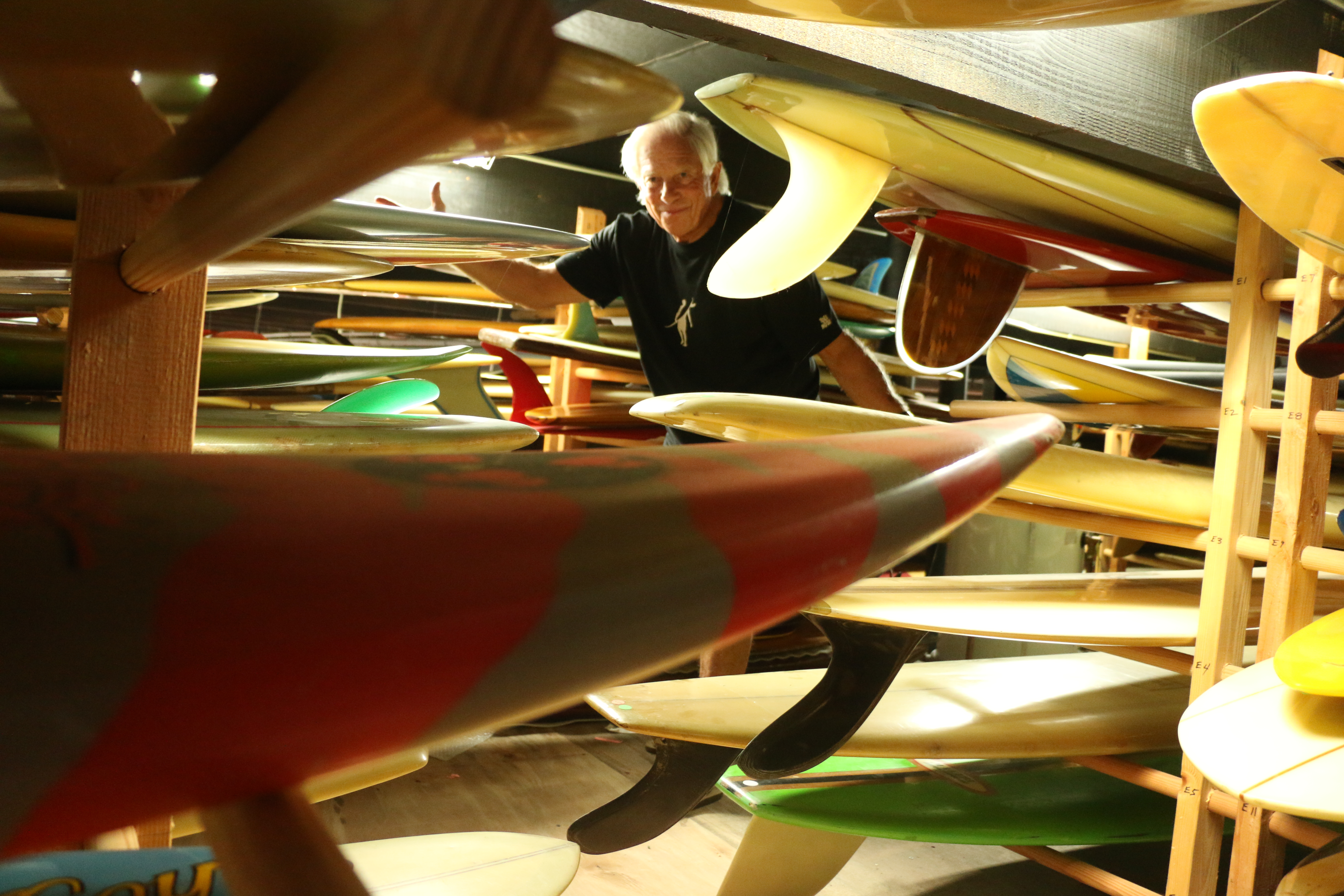 A treasury of surf culture from a San Clemente museum is making its way to America’s most prestigious display.

Recently, the Smithsonian Institute’s National Museum of American History accepted a gathering of items from the Surfing Heritage and Cultural Center in San Clemente, including surfboards and original pieces from the surfing documentary The Endless Summer to be put on display.

The Smithsonian exhibit, “Wave of Innovation: Surfing and The Endless Summer,” will be honored Aug. 22 at the museum.

One of SHACC’s lead docents and volunteers, Henry Ford, a surf legend in his own right, said the acceptance of the surf artifacts into the museum is a hallmark recognition not just for the heritage center but for all of the sport’s culture.

“As time goes on, we hope to donate more items to keep the stoke going,” Ford, 76, said. Ford also sits on the museum’s technical and educational committees.

The items were taken by professional curators, but there wasn’t much polishing or refurbishing done to the artifacts prior to shipping, Ford said.

Barry Haun, curator and creative director of SHACC, said he will miss having the authentic relics of surfing in San Clemente.

Haun said a film like The Endless Summer is a testament to that historical significance.

“The early pioneers of the sport…there’s a few of them left, but we’re losing them right and left,” Haun said. In their recollection of major events, “Surfers are like fishermen; that last fish gets a little bigger over time and that wave gets a little bigger too, so I think it’s really important we get their stories firsthand while it’s fresh in their memory.”

Surf Boards and Other Items:

Paul Strauch, executive director of SHACC, said museum board member Glenn Brumage was able to convince the Smithsonian Institute that the items were an integral attribute to America’s history.

Because of some connections Brumage has in D.C., they were able to arrange for donations to coordinate the donation quickly, Strauch said.

“It started two-fold with The Endless Summer’s 50th anniversary and with a cache of 50 surfboards, which was narrowed down to five,” Strauch said, adding he’s not sure how many surf artifacts the Smithsonian has currently.

One of the surf boards that belonged to Duke Kahanamoku, a founding father of modern surfing, was donated to the Smithsonian but one board remains at the museum with his signature engraved on the face of the board.

Surfing innovation was recognized by the Smithsonian’s selections, such as surf boards that were fastened as an early method of shipping them, as well as a collection of items that chronicle the culture’s progress. Some of the items SHACC donated came from San Clemente and surrounding areas but also originated from other surfing destinations.

“I’m a little bummed it’s all going there rather than staying here, obviously, but in the sense it gives validation to the historical significance of surfing, I think it’s worth it. Surfing is as romantic and appealing as the Old West. You don’t have to be a cowboy to appreciate that stuff and you don’t have to be a surfer to appreciate this.” —Barry Haun, curator and creative director of SHACC

All of the items, including the 16 millimeter film of The Endless Summer, have been shipped to the Smithsonian.

“It gives prominence to surfing,” Strauch said. “When I grew up, my parents were concerned because most of the surfers who came to Hawaii were vagabonds. They came with a one-way ticket, what they were wearing and a surfboard. They didn’t really have a work ethic. (They were) so carefree, and it’s been a stigma that makes (surfing) seem (like) a non-conforming sport.”

As the years went on, surfing became much more recognized as a legitimate profession and evolved into the internationally acclaimed sport it is today.

“People look at it from a different perspective,” Strauch said. “It certainly has become an accepted part of America’s culture.”

Aug. 22. Public donation ceremony by SHACC to the Smithsonian National Museum of American History. The exhibit is titled “Wave of Innovation: Surfing and The Endless Summer,” hosted by The Lemelson Center for the Study of Invention and Innovation.

Aug. 24. Duke Kahanamoku’s 125th birthday at the Smithsonian National Museum of the American Indian. Kahanamoku is considered the “father of modern surfing,” and made the sport world-famous by traveling around the globe as the Ambassador of Aloha from Hawaii after winning a total of five medals in three different Olympics.

Having the items from SHACC admitted to the Smithsonian is “the highest honor you can get,” Ford said.

Ford said it took a lifetime of collecting to accumulate all the items SHACC has.

“Our founder, Dick Metz, actually gathered a list of 100 of his closest friends whom he knew would appreciate surf history,” Strauch said. “He asked if people had any artifacts to have donated to a museum he was going to start.”

“Not many people have a connection to the ocean, unless you were part of a coastal community or a sea-fairing culture,” Strauch said. “With surfing, you could understand the different aspects of the ocean, so for me it’s a very special opportunity for someone who gets introduced to it and has an affinity to it.”

Taking care of the ocean and respecting it is another important factor surfing has had on American culture, Ford said, which is why he is glad to see the recognition. He said the ecological aspects have always been a part of surfers’ appreciation for the ocean.

“It developed into a lifestyle that I believe will help us save the ocean,” Ford said. “Many of the beginning surfers were watermen; they lived by the sea, they ate by the sea—it was a lifestyle.”

In addition to the Smithsonian pieces, SHACC is archiving tens of thousands of photos from SURFER Magazine and other sources. They can be viewed at the museum’s website under “Collections.” Many of the photos are 35-millimeter frames that are being converted to the digital archive.

“People need to know that we have these things available for them,” Ford said.

People can also bring in albums to be archived, and photographers will have their names credited to the work.

A comprehensive library maintains books and print archives with volumes of surfing information. For more information, visit the SHACC website at www.surfingheritage.org.