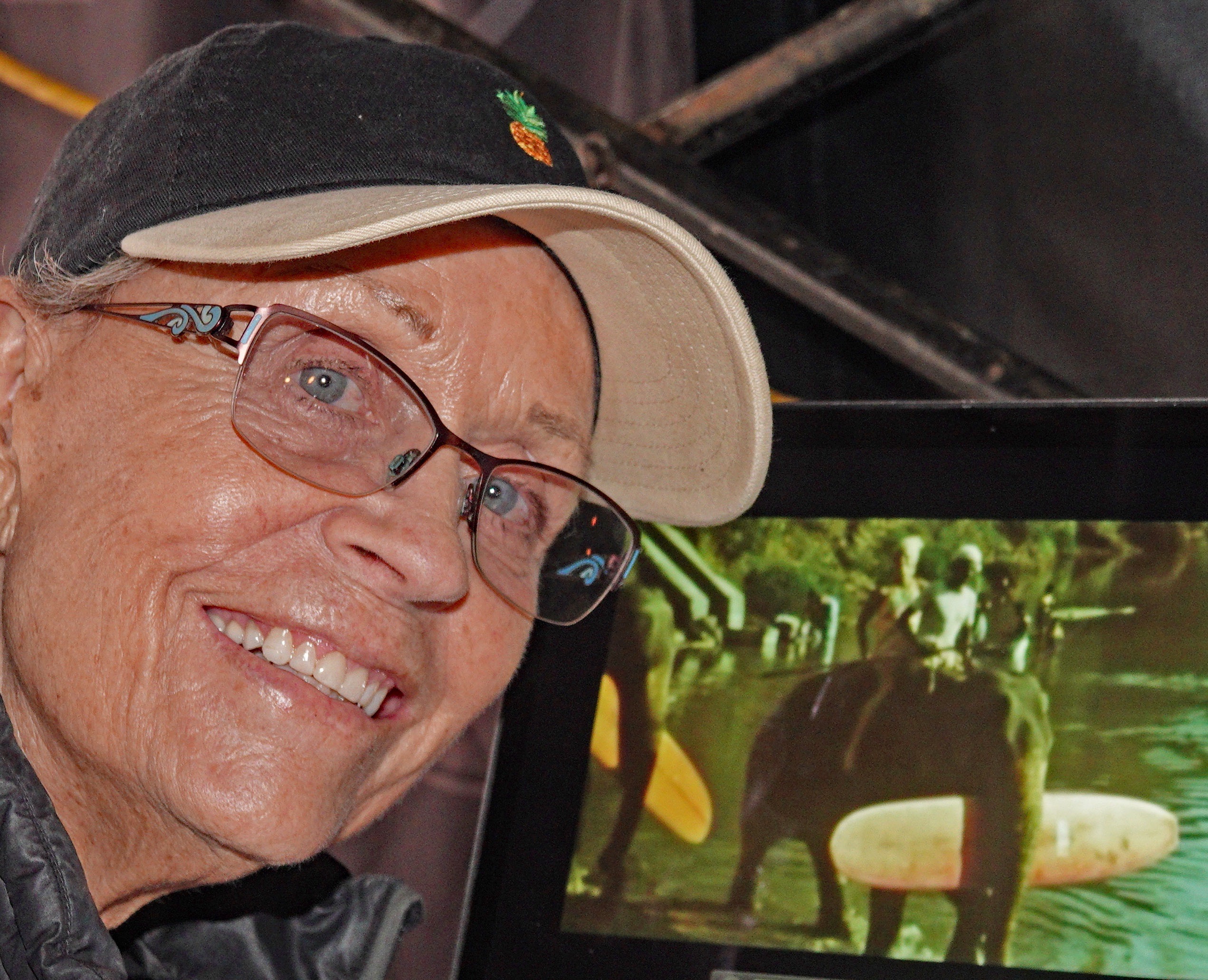 CoastLines: 1960s Vagabond Surfed Her Way Around the World

What most don’t know is that 50 years ago, moviegoers nationwide were watching her surf her way around the world.

Known then as Mary Lou McGinnis, she was a South Bay surfer co-starring with pro longboarders Bob Purvey of Malibu and Claude Codgen of Cocoa Beach, Fla., in a lively, fast-paced surfing documentary titled Follow Me.

This year is the film’s golden anniversary.

McGinnis was a competitive surfer who appeared in magazines, advertisements, movie stunt work and at national surf championships.

Follow Me, released in 1969, was Hollywood’s answer to surf cinematographer Bruce Brown’s 1966 movie classic The Endless Summer. Brown took surfers Robert August and Mike Hynson around the world searching for the perfect wave, seemingly finding it at an obscure spot in South Africa.

McGinnis, Codgen and Purvey didn’t find anything close to a perfect wave during their three-month intercontinental quest filled with adventures and misadventures, both real and scripted.

They had lots of fun in their quest, tackling any surf they could find in Portugal, Morocco, Ceylon, India, Hong Kong and Japan.

Robert E. Petersen, the surf magazine publisher, conceived the project in 1967 and produced it. Surfing Magazine is listed as “special consultant.”

“They took us to all the worst places,” Drummy said recently, while watching the movie again on DVD. “They weren’t going to wait until next year to reschedule anything.”

The three adventurers, cast as surfing ambassadors called the “Surf Corps,” ended up riding stormy waves in frigid water at their first destination, Portugal. They froze, wearing only sleeveless spring suits. And they didn’t use leashes then.

Most of the surf they encountered globally was windblown slop. But their surfing talents were showcased admirably in it. In better surf in Hawaii, the last stop in the movie, Codgen switches from a traditional longboard to a shorter, newly introduced seven-foot-long “vee-bottom” that instantly ratcheted up his moves, offering a hint into surfing’s impending shortboard revolution.

The movie is a fun, exuberant, wide-eyed romp around the world by three thoroughly likable vagabonds, experiencing a cultural epoch that no longer exists.

The cinematography is stylish and first-rate. Filming it were a young, pre-IMAX Greg McGillivray and Jim Freeman, who are legends in surf culture and in the IMAX documentary genre, joined by Mike Margulies, who went on to a long list of TV and movie credits ranging from The Waltons to Police Academy.

Writing the script was Stanley Ralph Ross, a writer, creative guru and actor whose TV credits range from Batman and All in the Family to Wonder Woman and The Incredible Hulk.

The surf film’s soundtrack is built around a catchy theme song, “Thru Spray Colored Glasses,” co-written by Bread’s David Gates and cinema veteran Stu Phillips, who over the years provided tracks for TV and movies from The Monkees to Battlestar Gallactica.

Vocals are by Dino, Desi and Billy. Instrumentals crafted by Phillips reflect the flavor of each country visited, while weaving in bits of melody from “Spray Colored Glasses.”

Comic scenes include McGinnis getting uncomfortably close to a snake charmer in Ceylon, the surf crew being outwitted by merchants in a Casablanca marketplace and surfboard-laden rickshaw races in Ceylon. While clearly contrived, these scenes are slap-happy entertainment, reminiscent of Bruce Brown’s comedy scenes in  The Endless Summer.

The opening scene of Follow Me shows the surfers jogging across the tarmac to board a TWA jetliner at a stark, primitive-looking Los Angeles International Airport. For today’s viewers, it’s an oh-my-gosh moment.

In a selfie-worthy moment, the three adventurers are each perched atop an elephant, being ferried across a river in Ceylon. Each elephant’s trunk cradles a surfboard.

When the trio arrives in India, Purvey, the story’s narrator, proclaims, “It’s really something that, with 4,000 miles of coastline, no one had ever surfed here before.”

There’s a Moroccan surf spot, aptly named The Camel Farm for the locals, encountered there. There are exuberant interactions with locals, such as McGinnis washing clothes by hand at a roadside with Portuguese ladies and the trio passing out Surf Corps stickers in Morocco.

You wonder if that train in India still has a Surf Corps sticker plastered onto its side.

In Japan, the surfers visit what was then a new worldwide phenomenon, Tokyo Summerland, an intensely crowded indoor wave pool that could pump out one tiny mushburger after another.

“Of all the things we’d done, that was the wildest,” Purvey says.

Could these have been the first, or among the first, surfers to ride an artificial wave?

Tokyo Summerland was for bathers only, yet cleared the pool of paying customers to let the visiting surf celebrities put on a demo and try teaching a few locals to ride a wave.

The park still exists, more crowded than ever. Search YouTube for videos of Tokyo Summerland.

Could it be that Mary Lou Drummy was the sport’s first female to surf her way around the world? There can be no certainty, but it seems a pretty good bet.

Women’s surf history documentarian Sheri Crummer recalls that in the 1960s, women would fly to major competitions from different parts of the world, “but I don’t know of anyone who literally went around the world.”