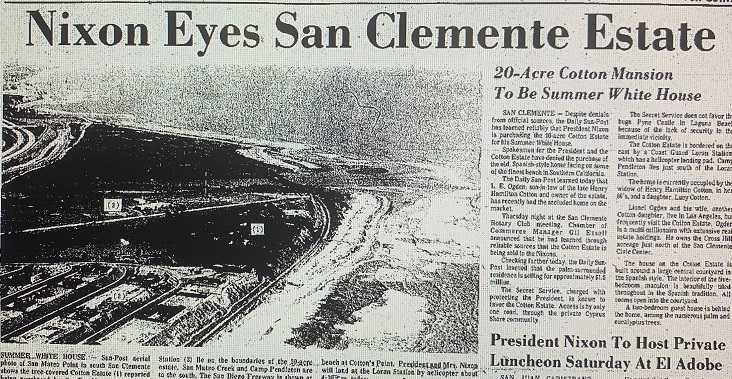 Dress code: Settling an impassioned dispute, the school board liberalized the Capistrano Unified School District’s dress code. “Short skirts—just about the only length available to girls these days—are now acceptable,” the San Clemente Sun-Post reported. “They may be no shorter than fingertip length. The popular see-through blouses are banned, however. The adopted hair regulation (boys) allows hair extending down to the top of the dress collar line. It cannot hang in the eyes or over the ears. Sideburns will be allowed to the bottom of the ear but cannot flare out on the cheek.”

Lifeguard strike? City lifeguards threatened a strike over below-average pay. The threat fizzled but led to the city firing Lt. Steve Chorak, leader of the movement. He sued the city, achieving a compromise settlement but no reinstatement.

Surfer Prez: While spending much of August in San Clemente, President Nixon received a surfboard as a gift from daughters Tricia and Julie. Six-foot waves kept him from trying it out. “I went into the water and got knocked down twice,” he told reporters. He said he chatted with enthusiastic surfers, assuring them that the Western White House’s security zone didn’t forbid surfing. “I’m going to rent out my surfboard,” he said jokingly.

Surfers & swimmers: Responding to complaints about the danger of bellyboards bonking swimmers, the City Council voted to restrict bellyboarding. The ordinance limited that style of surfing to the same locations the city allowed surfboards. The restriction didn’t apply to soft-foam boards used by small children. Oh, and bodyboards didn’t yet exist.

Trafalgar Canyon: Planning commissioners approved a four-level, 64-unit condominium to step down the Pasadena Court bluff into Trafalgar Canyon, facing T-Street Beach. It was on the site of an elegant Ole Hanson era oceanfront mansion. Protests alleging desecration of a coastal canyon led the City Council to postpone a decision.

The outcome: Councilmembers approved the project, stating that it was legal under R-4 zoning. Three years later, demolition of the landmark mansion to clear the site caused a public outcry. A San Clemente Historical Society was born, becoming a force that eventually convinced the city to establish preservation programs.

Promote the town? Hotel and apartment owners hissed and booed as the City Council voted to no longer offer the Chamber of Commerce a subsidy, using bed-tax funds, to promote tourism. Supporters of the $11,375 budget request said other towns did it and that the tourists attracted to town benefit the entire economy, not just hotel-motel owners. Councilmembers said few California cities did it, and it’d be a special-interest allocation, better spent on beautification and amenities.

Beach-use tax? The City Council placed a measure on the April, 1970 election ballot asking voters if they would support a beach-use tax of $1 per year. If it passed, residents and visitors would have to purchase a $1 license each year to use city beaches. Proceeds would help fund beach maintenance and lifeguards. Voters rejected it resoundingly.

Birth of the Miramar: The historic San Clemente Theatre closed for a $150,000 refurbishment by its new owner, Herb Copeland. It reopened Dec. 17 as the Miramar Theater, with everything new, inside and out, while retaining the landmark’s classic architecture. A new pylon-style marquee was the only big exterior change, replacing a wall marquee.

Imagine the shock: One night, eight undocumented immigrants were stunned at 2:15 a.m., trying to sneak past San Onofre’s Border Patrol checkpoint by walking the beach around Cotton’s Point. Little did they know it was now a security zone around the Western White House. “Suddenly, ZAP! Huge floodlights illuminated the scene,” the Sun-Post reported. “Standing frozen at the surf’s edge were eight shabbily dressed and thoroughly frightened men,” the story said. The Secret Service, local police and the Border Patrol took the eight into custody, along with two smugglers awaiting them with trucks at Calafia beach.

Long hair rules! Haircut prices at local barber shops escalated, in stages, to an unheard-of $3, within five months after having been $2.25. The culprit? Long hair was slashing barbers’ profits. Men were getting fewer haircuts. San Francisco suffered the steepest price hikes, already up to $3.50. Inflation and “the Hippie generation” were squeezing the industry, Avenida Del Mar barber Frankie La Bianco said. Shorecliffs barber Bud Casper recalled that haircuts were 35 cents back when he began 31 years earlier. “And I think I’m worse off today at today’s prices,” he said.

Heard this before? After a year of closely monitoring a new nuclear power plant that began service at San Onofre in 1968, a study found no adverse effects on marine life. Surveys by the state’s Bureau of Radiological Health, the Department of Fish & Game and Southern California Edison were presented to the San Diego Regional Water Quality Control Board. The monitoring included comparing San Onofre’s kelp reef with kelp reefs north and south of the power plant.

Kmart wasn’t first: Plans were announced to build what would be San Clemente’s biggest shopping center, along Camino de Estrella. A 100,000-square-foot W.T. Grant department store would be accompanied by a supermarket, shops, a bank and a coffee shop.

Pier gets bashed: Lifeguard Chief Dick Hazard reported that the pier was shaky but in no danger of collapse after successive days of December storm surf sent waves up to 12 feet high lashing the pier. Towering waves snapped four pilings, damaging cross-braces and stringers and forcing closure of the pier for the weekend. Scuba divers did underwater inspections.

Holiday visit: President Nixon and wife Patricia arrived Dec. 30 from Washington, D.C., to spend New Year’s in San Clemente. He announced he would register to vote as a San Clemente resident, joking that he hoped his Congressman would reply to any letters he would write.

War on pollution: On New Year’s Day, 1970, President Nixon signed the National Environmental Policy Act, announcing from his Western White House a national war on air, land and water pollution. “We are determined that the decade of the ’70s will be known as the time when this country regained a productive harmony between man and nature,” Nixon said. “It is literally now or never. Once the damage is done, it is much harder to turn it around.”