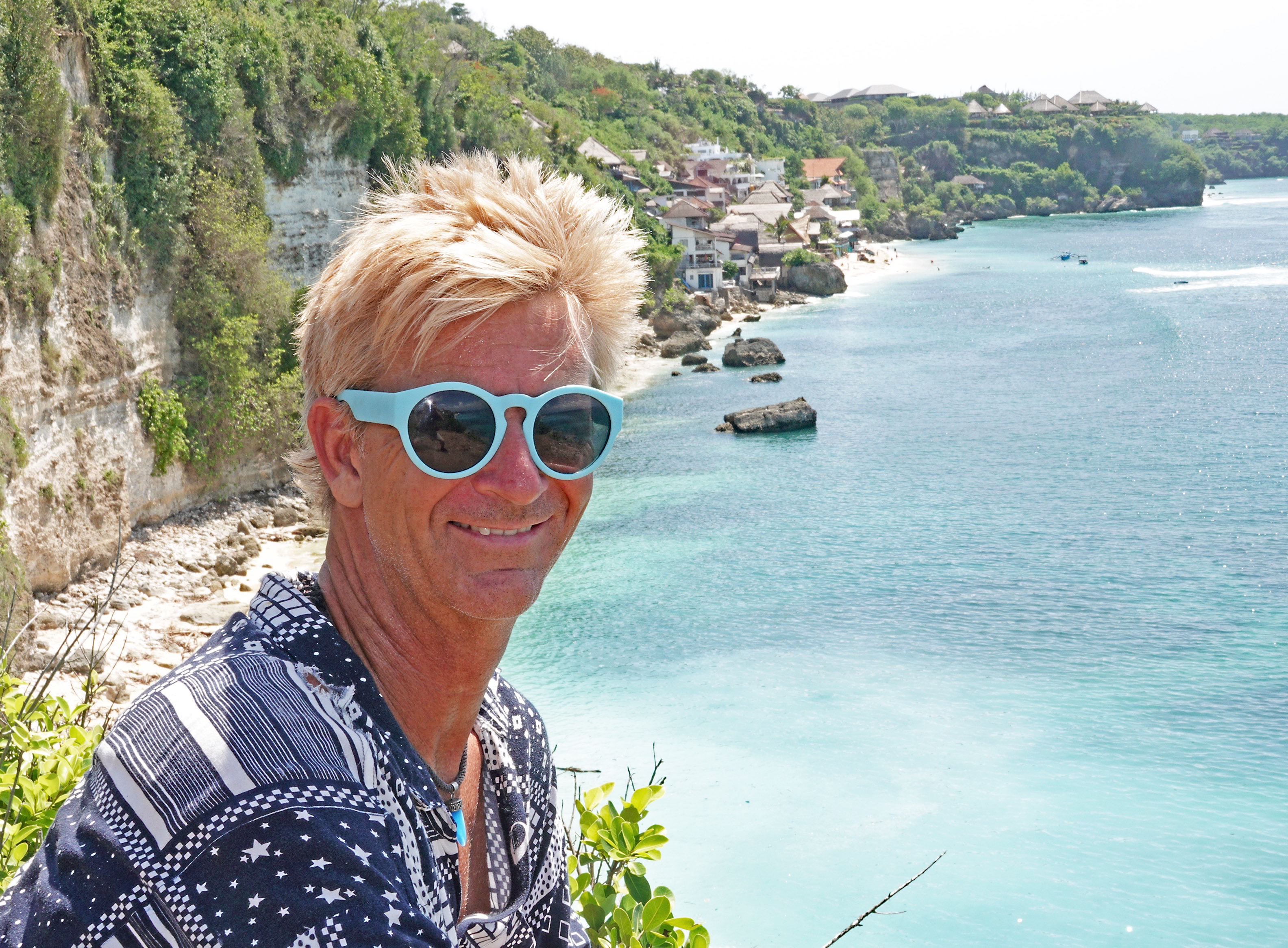 Wouldn’t You Rather Be in Bali?

About 8,000 miles from his hometown, Bobby Priest is following his dreams in a tropical paradise.

“Happiness is not about material things,” his mantra proclaims. “It’s about what’s on the inside and doing what you love.”

Shaken by the death of his mother in 2013, Priest did something most successful American entrepreneurs wouldn’t dare to try.

He ditched a career in investment, financial advising and real estate.

Reassessing his priorities, he concluded that living the high life isn’t worth it, if you don’t enjoy what you do.

“Throughout my career in corporate America, I’d go for years without even playing guitar, getting so caught up in the day-to-day thing with business,” he said. “By the time you get home, it’s like you just don’t have that creative energy anymore.”

Before hitting the reset button, Priest studied Google satellite images of tropical beaches around the world. He read about the local vibe. He chose Bali as the place he felt he could most satisfyingly slide into a simpler life.

He rented out his home and packed his belongings.

“A backpack, a surfboard and a guitar,” he said. “And everyone is like, ‘You can’t just give up everything. You have no idea where you’ll stay.’ ”

Seven years later, Priest has roots in Bali. He has found bliss, even if his new life didn’t prove to be all that simple.

It began well—lots of time to surf, play guitar and reflect on what might be his next chapter. He settled on writing illustrated children’s books, each one paired with a musical soundtrack.

Happiness, he would sing, isn’t all about money and materialism.

Little did Priest know that the date April 4, 2017 would test his beliefs.

A fire swept through his neighborhood, Bingin Beach, destroying four buildings including his rental space, into which he’d invested in significant upgrades.

No one was seriously hurt. Priest easily could have been.

He was finishing a gym workout when his phone rang. His home was on fire. In an instant, his life flashed before him. “Please! Please!” He willed the fire to spare his valuables, as he frantically motorbiked narrow, winding streets toward Bingin Beach.

The belongings he’d accumulated over three years were in that apartment, on a steep hillside overlooking the sea. Most critical were computer files that he hadn’t backed up.

To reach his burning abode, he had to swiftly descend 160 steep steps to the beach, then play mountain climber, scaling the burning building, three floors up, hand over hand. He had to hang on for dear life with one hand while punching out an obstacle—a fiberglass overhang—so he could lift himself onto his balcony.

The scene in front of him was life-shattering. Inside his flaming, smoke-filled apartment and his recording studio—dare he enter them—was his livelihood, his dream.

Wrapping his shirt around his face to fend off smoke, he was just able to grab his favorite guitar, his passport and his laptop containing all the work he’d done on Lit’l Bobby books he was poised to begin releasing. Text . . . artwork . . . recorded music.

He got in and out just in time, flinging his backpack and guitar case over the balcony into a tree to cushion their fall to the beach.

He climbed back down. Laptop, files, guitar and the climbing acrobat all survived.

Priest then spent three hours in bucket brigades, helping locals battle the fire and salvage anything possible from the buildings.

He then announced his ordeal to friends in San Clemente on Facebook, posting pictures and astonishing them by expressing a sense of peace and rebirth—no anger, anxiety or despair.

“Little did I realize,” he posted on Facebook, “that soon I’d actually be living the exact lesson of my first children’s book.”

Priest’s GoFundMe page wasn’t for his own benefit, but to help local families affected by the fire rebuild their lives, including a Bingin Beach family that had taken him in. He also dedicated earnings from his first book—Happiness—to the cause.

Happiness was first in a series of Voice of the Moon books. Each book conveys a life lesson. In the second book, The Planets, Pluto gets kicked out of the solar system because, in astronomers’ view, Pluto didn’t fit.

Makua the Whale, being released this month on Amazon and on bobbypriest.com, describes a whale’s encounter with Bully the Shark. You can guess the moral.

BACK ON THE BEACH

The past three years have been challenging. Priest moved into a cheaper rental, away from the beach. He tapped into his stateside resources to help with the rebuild, selling his U.S. home.

When the coronavirus pandemic unfolded, Priest rented a room atop the Bingin Beach cliffs to be close to “home.”

“I was afraid they would lock down the beach,” he said. “I was right.”

He will help oversee the rebuild, now getting underway. He hopes to move into his new digs in seven months.

Sorting things out has been an ordeal. Through it all, Priest revels in the simple joys of Bali, the resilient, ever-smiling Balinese people. He cherishes time on the beach with guitar and surfboard.

He acknowledges he could’ve moved back to America and the business world, even if just temporarily, to rebound.

“It doesn’t even cross my mind to go back into what I used to do,” he said in a 2017 Sun Post News interview. “I love Bali—a place where they can have almost nothing, yet seemingly have everything at the same time.”

On Life and Love After 50: Why High School Reunions Are Good Places for Seniors to Meet