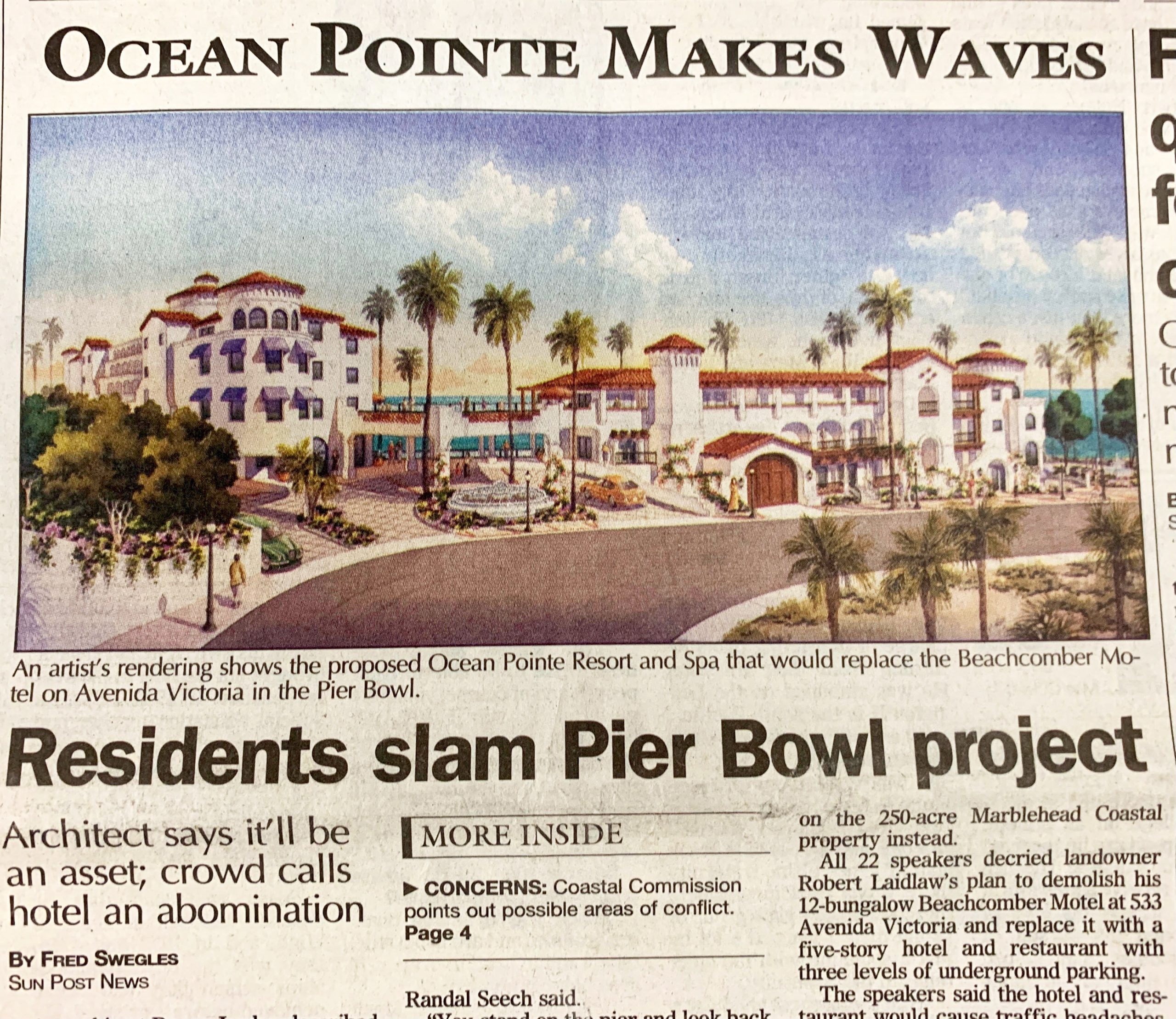 Were you here in San Clemente 20 years ago? What was going on that year? Let’s have some fun by taking a trip back in time to 2001, and relook at how things were different then.

One of the most eye-popping topics was a proposed five-story, 73-room hotel overlooking the pier, including a restaurant and three levels of underground parking, tearing down the 12-bungalow Beachcomber Inn to make way for the hotel.

Residents objected to scale, intensity, view blocking, walling off the Pier Bowl, traffic headaches. Some said beautiful design, but not there; better put it at Marblehead Coastal instead.

The developer proclaimed it would anchor the south end of the Pier Bowl, establish a stylish architectural cornerstone and open up visitor services that didn’t exist (and still don’t) along the oceanfront in San Clemente.

Today, the Beachcomber remains a Pier Bowl landmark, ever popular. Now, let’s look back at 2001:

Shayla Sabin and Patricia Gialamas appeared on boxes of Kellogg’s Frosted Flakes in honor of their championship soccer club, the Slammers.

The city installed 14 decorative light standards on the pier with pointy tops to stop seagulls from perching there and dropping white goops down onto the pier.

A fire knocked out one of two reactors at the San Onofre Nuclear Generation Station.

The city hired a warden to enforce rules at San Clemente city parks.

Parents appealed to the school district not to close Ole Hanson Elementary School after its 36 years.

Grading for the Talega community uncovered and identified the remains of hippos said to have roamed what is now San Clemente 40 million years ago.

The city council said it would look into the feasibility of building a high school campus on a future street corner, Vista Hermosa at La Pata.

Gov. Gray Davis announced a 20-year statewide rail plan that envisioned high-speed trains passing Amtrak trains along our coast, along a double track. The city council came out adamantly against it and asked state and regional officials to take the tracks off the beach. The plan for parallel tracks at our beach evaporated.

At a hearing, coastal commissioners ripped into a city-approved plan for 424 homes on 250 acres of Marblehead Coastal land, complaining about far too much grading of canyons and landforms. Developer Jim Johnson withdrew the project, going back to the drawing board.

Lynn Hughes retired as lifeguard captain after 27 years with the city.

People who like to play bocce ball appealed to the city to provide public courts.

The swallows returned not just to San Juan Capistrano from South America on their annual migratory flights. Nests appeared lined up in spaces along the entrance to Walmart in San Clemente.

A nasty, disfiguring dog bite on a 5-year-old at San Onofre Surf Beach led state park officials to clamp down on dog-rules violations and consider banning dogs there.

In Hawaii, a former Honolulu police officer was indicted in the death of former San Clemente resident Dana Ambrose, 19, as a result of a collision.

A state-sponsored report said that the earthquake threat to the San Onofre Nuclear Generating Station appeared to be far higher than previously expected.

A plan for a 73-room hotel near the pier drew harsh criticism from many speakers at a public workshop, with the developer hoping to take the project to the Planning Commission. The hotel plan fizzled.

Apple Market, 602 N. El Camino Real, closed, leaving a shopping void after more than 40 years of supermarkets there. A Sav-On would follow up.

A bee instruction forced a day’s closure of the 73-year-old Ole Hanson Beach Club for removal of the bees.

A wildfire in Trafalgar Canyon destroyed five Cazador Lane condominiums. Suspected cause: kids in the canyon.

The city council adopted a policy of not constructing any more buildings on the beach. The goal was to protect existing buildings, as long as practical.

San Clemente came to grips with the Sept. 11 terror attacks on the Twin Towers in Manhattan and the Pentagon. San Onofre Nuclear Generating Station went on alert. Local agencies stepped up emergency preparedness plans, and San Clemente became alert for any suspicious activities.

Jim Johnson introduced a refined Marblehead Coastal plan, substantially scaling back grading to protect canyons and habitats. It would need Coastal Commission approval, which came in 2003.

A coyote attacked three children on a playground at Truman Benedict Elementary School, in broad daylight.

The city council decided to build a dog park and allow dogs on leashes in three city parks.

The Golf Course Committee elected to experiment by changing the order of play on the first nine holes at the Municipal Golf Course to the way it was in 1930 when the course opened.

The council approved a plan for a $3 million Golf Course Clubhouse, replacing a 1960s clubhouse, after the city would complete a $1.6 million renovation of golf course bunkers, cartpaths, screens, trees and driving range.

A new owner took over the shuttered Miramar Theatre, leading to public concerns about demise of the stylish landmark building or preserving it for its future. One owner to another had multiple ideas to make the site a key component of revitalization of North Beach.

San Clemente founder Ole Hanson’s son, Lloyd Hanson, appeared in San Clemente, promoting a book he wrote named Inside the Casa, featuring pictures and recollections about his family and about his own adventures growing up in San Clemente living at Casa Romantica.

More than 850 homeowners in San Clemente’s biggest emerging community—Talega—became a voice to be reckoned with, as they approached the city about some concerns they had with the ongoing development.

There was debate over a downtown alley renovation plan that included a proposal to ban cars from taking the alley from Avenida Del Mar to Avenida Cabrillo.

On Life and Love After 50: The Status of Senior Dating as 2022 Approaches

Adoptable Pet of the Week: Geno