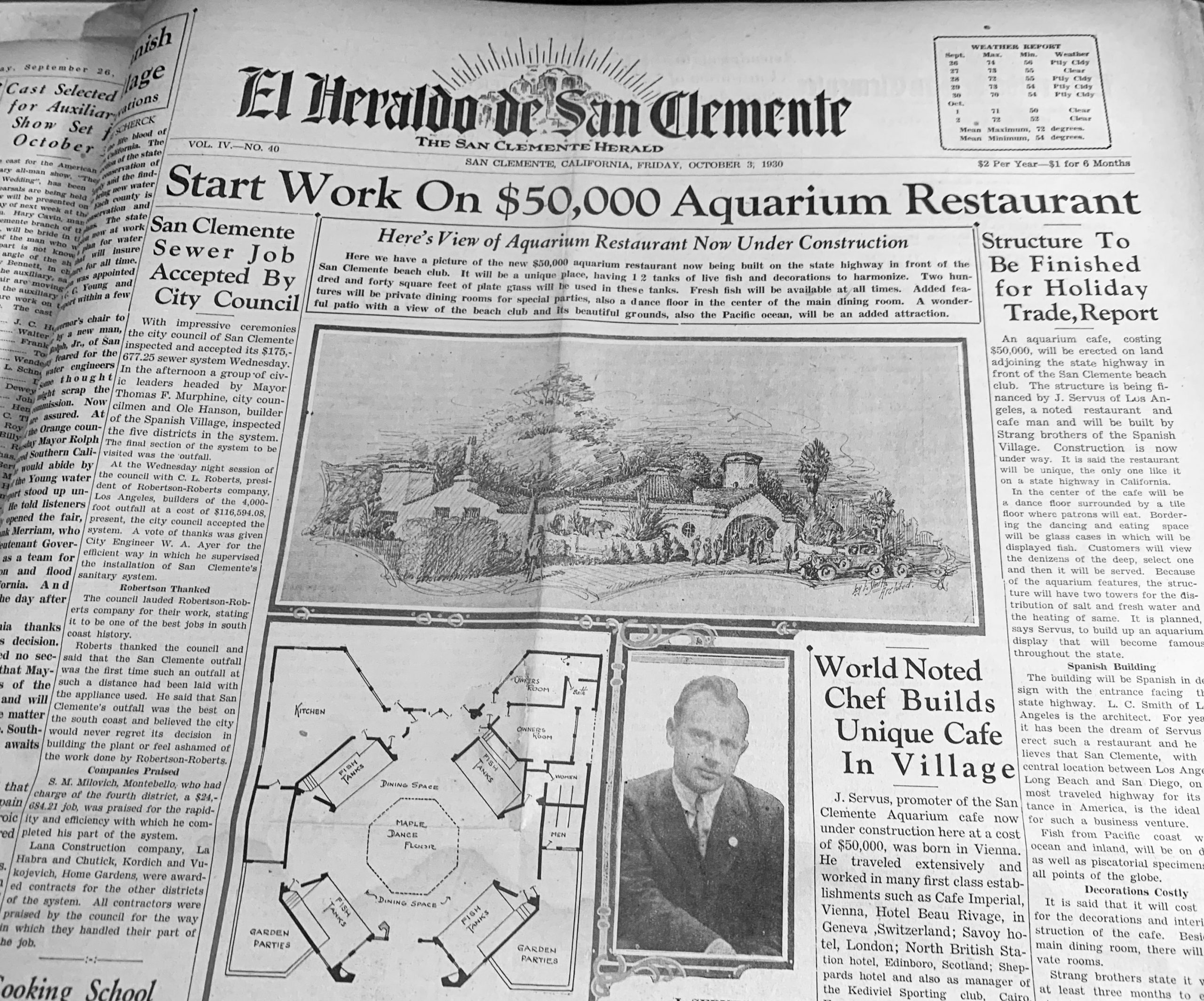 Seven months after the infamous Oct. 29, 1929 stock market crash plunged America into The Great Depression, San Clemente was still a sunny place to be, judging from the pages of El Heraldo de San Clemente, the weekly newspaper.

The paper, published by town founder Ole Hanson, maintained a rosy outlook, insisting that good times were ahead and that the beach town could ride out the nation’s financial difficulties.

California had grown so fast, and its real estate was so attractive, El Heraldo proclaimed that the economic setback would pass and prosperity would resume.

“I would rather be broke here in Southern California than any other place in the world,” Hanson told a business audience of 600 at Orange County’s Irvine Park, as reported in June 1930. “The trouble with us is that we don’t know when we are well off.”

Today, as we look back at life in San Clemente 90 years ago, it seemed the Depression hadn’t yet turned catastrophic in the Spanish Village.

Construction was ongoing, and El Heraldo repeatedly reminded readers that the Spanish Village had itself been one of the fastest-growing communities in the world, up until the financial bump. It was only a matter of time for the slump to pass.

California’s population had more than doubled since 1920, El Heraldo said, and most of that surge was in Southern California. Visitors continued to stream into the state. A news story said 85,740 automobile tourists had entered California from January through June 1930, compared with 26,285 for the same period in 1929.

“You with small vision, open your eyes,” an El Heraldo editorial beseeched. “You with fear in your hearts, become courageous. You are sitting on the development of a coast metropolis that as John Steven McGroarty says ‘will be one continuous city extending from Santa Barbara to San Diego, rivaling in population ancient Babylon with its multiplied millions.’ Watch San Clemente grow.”

Never mind that city dwellers who’d built enchanting beach homes in San Clemente from 1926-30 wouldn’t likely relish the prospect of their village morphing into a metropolis. But this was really just a pep talk, trying to assure property owners their real estate investment was safe.

Then, by 1934, Ole would have to relinquish his palatial San Clemente home, and bankers took over most of the town’s real estate.

In 1930, Ole was telling his audience that, yes, there was some unemployment in the USA, but nothing like the hardships in China, India or England.

America’s westward expansion was destined to drive economic activity in Southern California, more than any part of the country, Hanson said, because “it is the stepping-off place, the terminus of the westward march.”

He urged his audience to cast off “the loud cries raised by calamity howlers.”

Said El Heraldo: “The gold rush of ’49. though picturesque and romantic, was a small affair compared with the modern movement in population. More people travel over any one of the great national highways in a month than came across in the covered wagons of ’49 in a year.”

Boulder Dam was under construction—a monumental conquest of the desert in Nevada—ensuring ample water for hordes who would visit or move to California seeking opportunities.

Locally, construction was beginning on a new highway linking Elsinore with San Juan Capistrano, making San Clemente beaches more accessible from Riverside County. The shortcut, to be known as Ortega Highway, would bring the Imperial Valley 75 miles closer to the sea.

Fishing: Record numbers fished from San Clemente’s pier, its sportfishing boats and fishing barge the weekend of May 24-25, hauling in more than a ton of fish. “Nearly 100 anglers used the barge, while 65 were taken care of on the two live bait boats.  It is estimated that 250 used the surf and pier for fishing,” El Heraldo reported, citing catches ranging from 25 to 100 pounds.

State Highway: Construction was underway to widen El Camino Real to 56 feet, including installation of 174 ornamental light poles that also would line Avenida Del Mar to the ocean.

Recreation: With 3,000 feet of beach, a social club, a pier, a plaza, playgrounds, horse trails and the new golf course, San Clemente had more than $1.5 million worth of recreational property— “more park property than any city in the county, regardless of size,” El Heraldo proclaimed. “In fact, we doubt if any city in the nation the size of San Clemente or cities ten times its size can show a park valuation such as the Spanish Village has.”

Mini Golf: A miniature golf course opened along El Camino Real, “so located that any highway tourist can stop and get in a round when on his way to San Diego or Los Angeles.”

Lore: An 80-page book, The Story of San Clemente by Homer Banks, was published, on sale downtown at the San Clemente Art Shop.

Resort Hotel: Edward Fowler took out an option to build a million-dollar hotel on 12 acres overlooking the beach. The option required construction to begin within four months. Fowler said the hotel would include “every comfort and luxury imaginable and, when constructed, will be the most beautiful hotel on the west coast.”

Dancing & Dining: The Aquarium—a restaurant featuring a maple dance floor and live fish tanks—was under construction along the state highway near the San Clemente Beach Club.

Railway: Santa Fe announced a Spanish-style train station to be situated along the tracks beside the beach club.