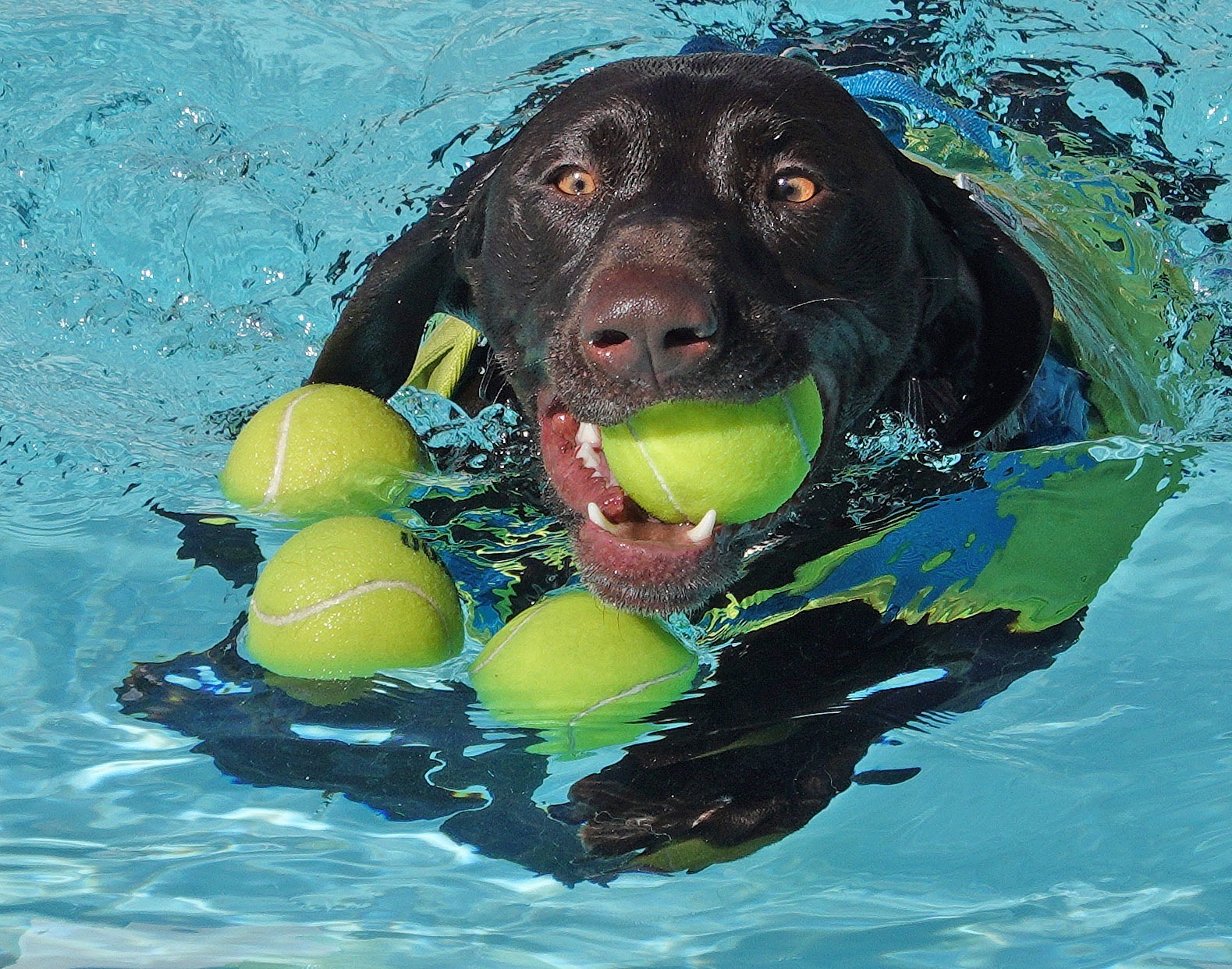 In all of the years I’ve enjoyed events at the Ole Hanson Beach Club, I’ve never witnessed a higher level of energy and pure joy than on Saturday, Nov. 23.

That’s when the city turned the pool over to the dogs.

From 10 a.m. to noon, at an event dubbed the “Doggie Dive,” close to 100 dogs paid $2 each—or their owners did—for unfettered access to our pool.

Dogs big and small got along great. It was a sight to behold. They would dive repeatedly into the water and chase an abundance of tennis balls the city provided.

I got a bit wet—and my camera did, too—when I inadvertently got too close to pooches climbing out of the pool, wildly shaking their heads and bodies to shed a pound or so of water, before diving in again.

They never got tired of it. They were in bliss. By the end of the first hour, parts of the pool deck were awash.

This was an event the city originally held on Dec. 14, 2013, while preparing to drain the pool for extensive renovations.

I found myself saying, “Wow, they should do this more often!”

Except they can’t. Imagine if the city had reopened the pool to humans after 100 dogs had their way with it for two hours. The county health department would be aghast.

So the most you can expect to see this event is whenever the pool closes for draining and maintenance, which may be done yearly. The pool is closed now, probably for a couple of weeks, I was told.

I also didn’t see any dog owners jumping in to frolic with their best friend. My guess is it wasn’t allowed.

I don’t know if I’ve ever seen this level of nonstop exuberance at the city pool—with the possible exception of another event it would be wonderful to see the city revive:

For several years—and those may have been 2008, 2009, 2010 and 2011—the city invited the public to a family-friendly, island-themed party on select Friday nights every summer. The March 2012 closure of the pool for pre-renovation inspections ended Island Nights.

Oh, were they popular! At the door, you’d pay a nominal admission fee—say, $5 for adults, $4 for children. Kids (and adults who wished) could swim in the lifeguarded pool. Children could do city-chaperoned arts and crafts indoors. Upstairs, everyone could enjoy live music, usually a local band performing reggae, island music or other mellow, eclectic tunes for listening and dancing.

Outside, on the upstairs patio, you could buy a reasonably priced dinner plate, catered by any of several local restaurants that would offer to showcase their cuisine at an event. Each event would offer a different style of food. Some providers also sold beer, wine or other adult beverages.

Parents could spend time with the kids and/or some time to themselves.

It’s hard to imagine a more gorgeous place to dine, sip, converse and do selfies with the sunset.

If “Island Nights” is to restart, careful scheduling will be needed to avoid conflict with private rentals of the beach club. Actually, 24 Carrots, the beach club’s event producer, could partner with the city on selected dates and provide the dinner plate or buffet. All events I’ve ever attended that 24 Carrots catered were delicious.

Be forewarned, you won’t be able to do any Doggie Diving at “Island Nights” if it returns, which I hope it does. If you’re a dog owner, just be sure to watch for announcements, sometime next fall, for another possible Doggie Dive. You won’t want to miss it.