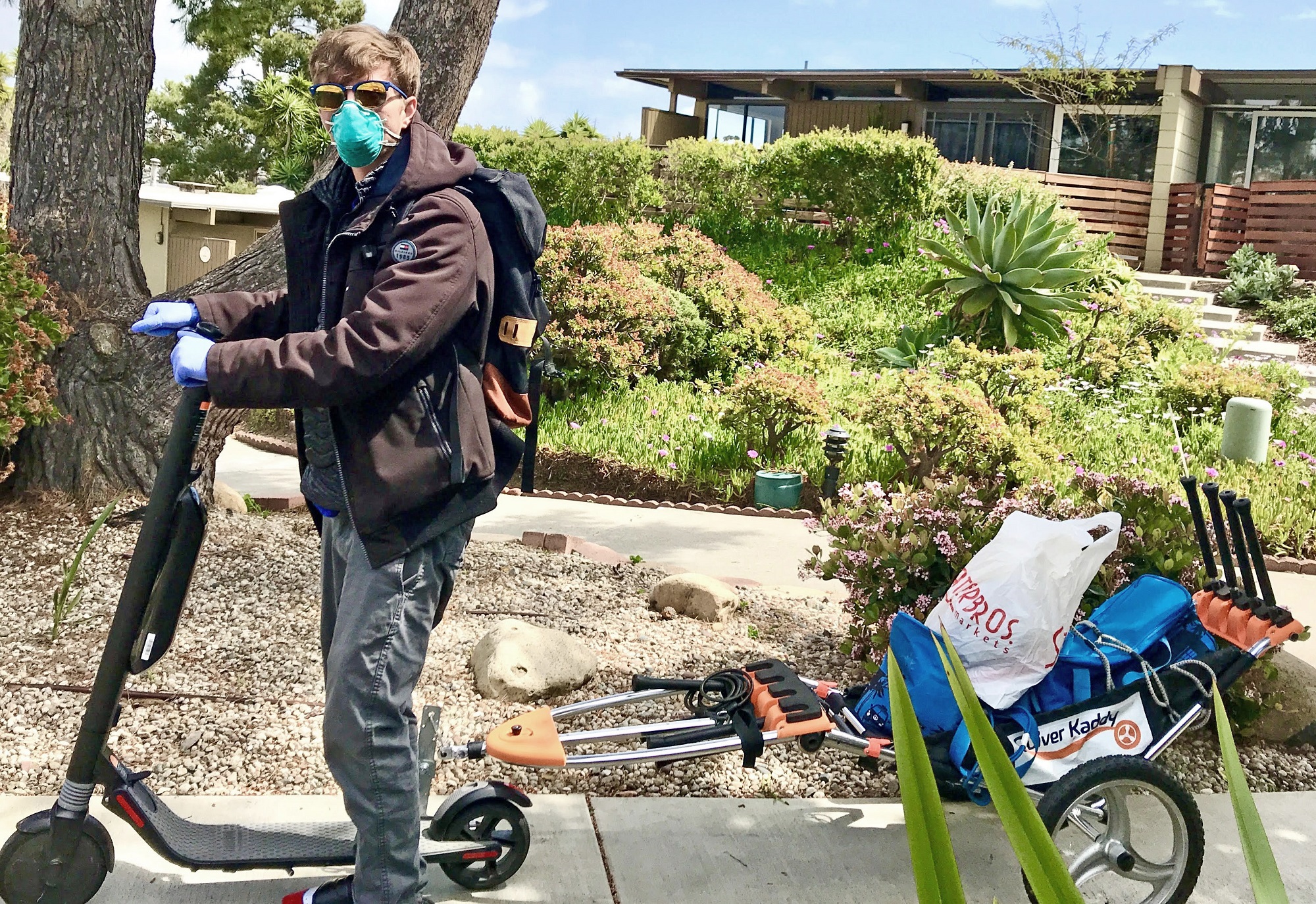 CoastLines: A Good Deed Goes for a Ride

UPDATE (April 15): With the help of the local community and their generosity, Plunkett on Tuesday, April 14, announced that he had reached his fundraising goal in order to purchase a new electric bike, furthering his mission of delivering food to those stuck at home during the pandemic.

“You guys went above and beyond and raised $1,200 in one night,” Plunkett wrote. “I was able to get the bike I wanted the very next morning after my scooter got stolen.”

Over the weekend, Plunkett notified his followers on social media that the electric scooter he was using to deliver groceries was stolen outside of a local liquor store.

With his new electric bike, Plunkett says he’ll be able to haul more food for his deliveries.

“You guys brought me to tears with your generosity, no lie,” he said. “I can’t thank you all enough.”

UPDATE (April 13): Plunkett reported some bad news over the weekend, letting the community know through social media that his electric scooter was stolen while he was out doing deliveries.

“So I was doing my deliveries today and I left my scooter outside the Silverado Liquor store on Estrella for less than 5 minutes because there was no place to lock it up. I came back out and it was gone,” he wrote.

Noting that his scooter has a metal trailer hitch attached to it and likely the only one in the area hauling a trailer, he’s asking the community to contact him if it’s found or spotted around town.

“That scoot was my favorite thing in the world and it helped me help others and now it’s just gone,” Plunkett wrote, adding, “I basically lost my job because of it being stolen.”

Plunkett said he can’t make any more deliveries until he has another mode of transportation such as his scooter or a new electric bike. He had previously set up a GoFundMe page where he’s been asking for donations so he can purchase an electric bike. As of Monday, April 13, Plunkett reached his $1,500 goal, raising $1,520.

Below is the initial story published on April 9.

Jason Plunkett came up with the idea one night while lying in bed. The 22-year-old San Clemente resident so much enjoyed riding his electric scooter around town. What if he could put it to use to help with the coronavirus pandemic?

Since March 23, Plunkett has been spending his days grocery shopping, delivering to people hunkered down in their homes.

“I don’t ask for any money for my time or efforts,” he says. “If they can afford to donate or tip me, that’s great. If not, I just feel happy that I helped people. Everyone—even people I haven’t delivered to—have given me amazing feedback.”

“I’m so proud of him,” says his aunt, Terri Plunkett, with whom he lives and who has been his mentor since the passing of Jason’s mother. “He’s the kind of kid who has to come up with things on his own. He’s really independent. He came up with this on his own. It has just taken fire.”

Jason hatched his delivery idea on March 23 after posting tear-away fliers around town and announcing his service on the NextDoor app.

People who call in an order can pay for it using apps such as Venmo, PayPal, Cash App or Zelle. Or they can pay cash, leaving an envelope out for Jason. He texts them, announcing a delivery and reminding them to sanitize every item purchased, then wash hands and face.

NextDoor, he says, has given him credibility, since “people are able to comment with reviews on my original post offering my services.”

Testimonials have been mounting.

Jason’s aunt, Terri, was a radiologist at Saddleback Memorial Medical Center San Clemente in 2011 when Jason, then growing up in Mission Viejo, lost his mother—Terri’s sister, Carol—to a congenital heart defect.

A San Clemente Sun Post news article described how Terri Plunkett performed an adventure-packed “Paddle from the Heart” fundraiser in memory of her sister.

She stand-up paddled 87 miles down the Colorado River, solo, from Davis Dam to Parker Dam, over a three-day period in 110-degree summer heat. Donations benefited the Children’s Heart Foundation.

“After my mom passed, she was a huge role model in my life,” Jason said of his aunt. “She’s the best and helped shape me to who I am now. She would support me with anything I wanted to do and helped me stay motivated.”

After working 22 years at San Clemente’s hospital, Terri Plunkett now is a radiologist at Scripps Memorial Hospital in Encinitas.

In 2008, Terri was in the news after she helped save a 55-year-old surfer stricken with a heart attack at San Onofre.

Fortunately, the surfer’s surfing buddy had watched him ride his last wave in, then, strangely, lie down on the shore. The surfing buddy paddled in to attempt CPR.

As providence had it, another surfer then leaving the water nearby was Nancy May, a physician assistant in the ER at Western Medical Center, Santa Ana. A third surfer who scurried in to help was San Clemente hospital’s Terri Plunkett.

The three did all they could to keep the surfer alive, but he was blue in the face as Camp Pendleton paramedics took him away. The rescuers feared they had lost him.

Just two weeks later, I got a call inviting me to San Onofre to witness a reunion of rescuers and rescuees.

It was one of the most heartwarming moments I ever got to photograph.

As I wrote in 2008, the stricken surfer had awakened in the ambulance, en route to San Clemente’s ER.

“How does it feel to come back from the dead?” the surfer quoted a paramedic as saying.

Terri Plunkett, not knowing if the patient could be revived, telephoned her co-workers.

“I was just blown away . . . are we talking about the same guy?” my article quoted Terri. “I was just totally awed.”

I don’t know which Terri Plunkett article I enjoyed writing more. When Jason mentioned that I had written about his aunt, I had to look up the articles. What a blessing it was to be able to relive both experiences.

Jason, after graduating high school, attended just two college classes before deciding “it wasn’t for me.” He has worked a variety of jobs, including enterprises he organized, never deciding what eventual livelihood he wants to pursue.

His scooter delivery service has been as beneficial to him as to the people he serves, Aunt Terri says.

Jason started out delivering a handful of orders. Now it’s nearly nonstop, buying just a few things or orders up to $150. At first, he had to make multiple visits to a store to deliver big orders, carrying two backpacks.

“I figured out how to attach a trailer to my scooter with a few hose clamps and a random bolt I found,” he says. “It definitely helps!”

He also started a GoFundMe campaign, hoping to purchase an electric bicycle to deliver more efficiently.

“I was just telling a friend about it today, this is the best way I’ve spent my time in a long time,” he says. “It’s overall just good energy from everyone. It makes me feel good I can help.”

Adoptable Pet of the Week: Kyle