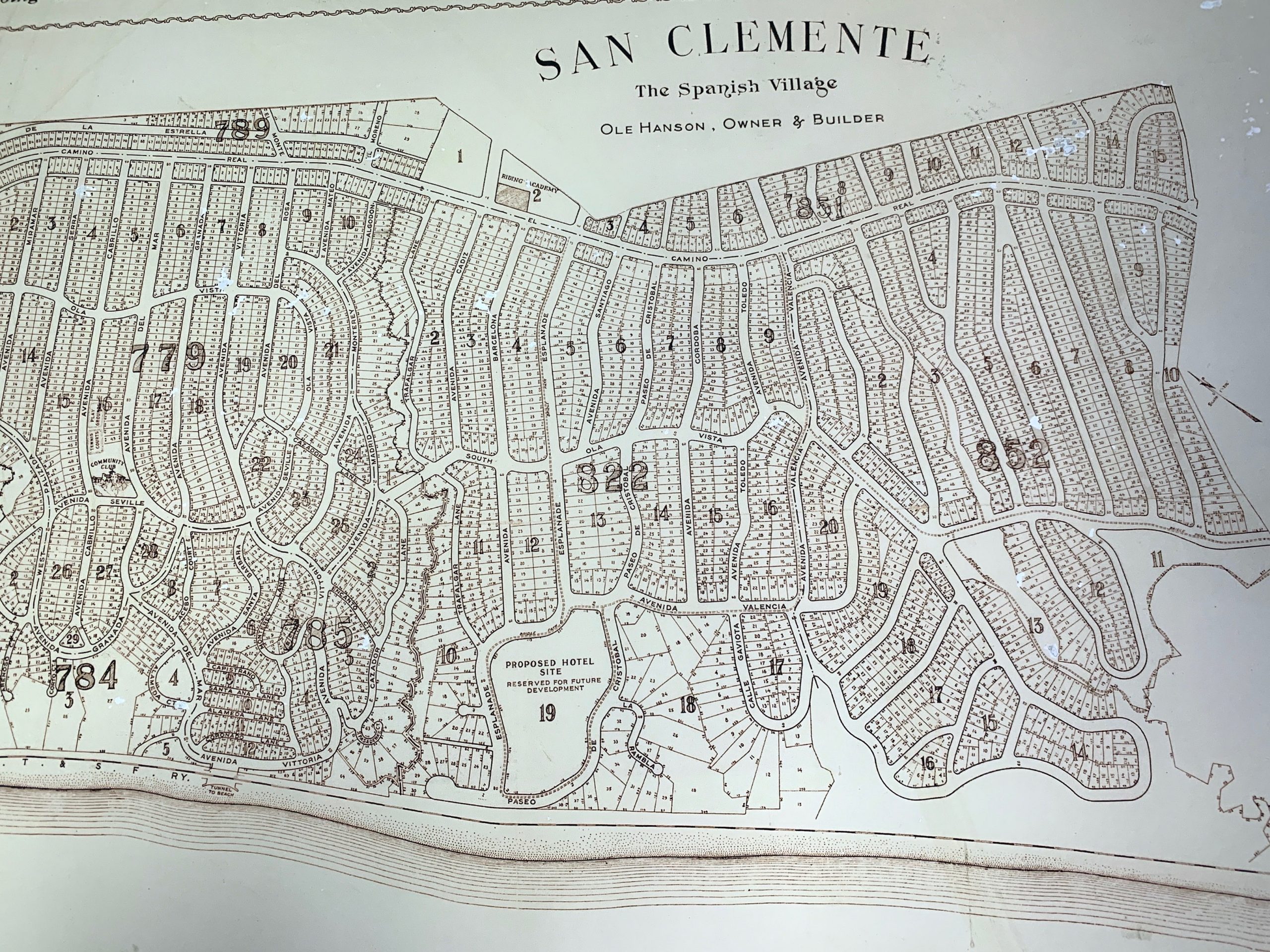 Next time you visit San Clemente’s T-Street Beach, pause to notice the grand width of streets that lead there.

Over the first five years of San Clemente—1925 to 1930—town founder Ole Hanson’s vision for his Spanish Village included a splendorous resort hotel at what is now known as T-Street.

Motorists arriving from San Diego or Los Angeles could reach the planned hotel by taking either of two broad avenues—Valencia or Esplanade—from the state highway, El Camino Real. The 10-acre hotel site was to be surrounded by impressively wide streets.

How different Ole Hanson’s Spanish Village might have looked if the visionary had managed to build the splendid hotel and its bungalows.

A 1927 plot map that Ole drafted during the height of American prosperity—the Roaring ’20s—depicted the hotel site.

It would have taken up not just a hillside that overlooks the beach, between Paseo de Cristobal and what later became Calle Marina. The site extended all the way back to the corner of Avenida Esplanade and what is now Calle Toledo.

Go look for yourself—it was more than four times as big as the grounds of Ole’s exquisite former home known today as Casa Romantica Cultural Center and Gardens. You can view the 1927 map at the Casa.

The plot map looks a bit different than the San Clemente we know today. It showed no pier, not built yet. Just the words “tunnel to beach.” A street at that location was named Avenida Vittoria—today, Victoria.

Avenida Valencia was shown leading all the way to the hotel site—two blocks downhill from El Camino Real, then continuing over to broad Paseo de Cristobal.

He commissioned Kirtland Cutter, designer of several buildings that eventually made the National Register of Historic Places, to prepare drawings.

“The sketches show views of a 100-room hotel, surrounded by twelve cottages, each cottage to have four rooms,” El Heraldo de San Clemente reported on May 16, 1930. “The entire architecture is Spanish. The sketches reveal a hotel of rambling two-story construction. Many parties are interested in building a hotel at San Clemente, and for that reason Hanson has had his architect sketch what can be done on the site.”

“Hotel men up and down the coast agree that no other city offers so many natural advantages for the construction of a high class hotel,” the article said. “San Clemente has bridle trails, the best strand in Southern California, a golf course, beach club and other recreational advantages. The location, halfway between Los Angeles and San Diego, is another advantage, it is pointed out.”

On Sept. 5, 1930, Ole announced a deal with Edward Fowler, an entrepreneur from Pasadena who was one of the original investors in the Spanish Village. Fowler, an engineer and architect who had built Spanish-style homes in Pasadena and planned San Clemente’s water system, took out an option to build a million-dollar hotel and bungalows on a site then described as 12 acres.

He promised a carefully designed hotel that would fit in with the Spanish Village.

“The hotel will comprise a large central building with a number of fine bungalows, this being the present modern type of hotel building,” El Heraldo stated. “The option becomes void if the construction of the hotel does not start within four months, according to Ole Hanson.”

Four months passed, and there was no groundbreaking or further mention. Evidently, the deal dissolved.

El Heraldo’s biggest headlines that January 1931 touted Santa Fe railway’s construction of a train depot at what is now known as North Beach.

Larry Culbertson, president of the San Clemente Historical Society, has complete volumes of El Heraldo for 1930-31. We see that the newspaper, listing Ole as its publisher, maintained a cheerful tone, forecasting a bright future despite financial mayhem elsewhere in America.

At some point in the early 1930s, the site was redesignated as residential. A new San Clemente plot map, no date attached, substitutes 53 residential lots where the resort would have stood.

In 1935, Ole launched a desert housing development at Twentynine Palms. He died in 1940.

Through 1934, Ole’s former newspaper, El Heraldo. carried minimal news of him. The Santa Ana Register published several big articles about him. But a search of Register articles at newspaperarchive.com turned up nothing announcing his departure from San Clemente—the only hint being a series of tiny legal announcements on back pages, listing property divestitures.

On Aug. 20, 1934, the Register reported that Edward Fowler and H.H. Cotton were among partners in a plan to enhance the beach club at the northern entrance to town, adding other tourist amenities including a casino for dancing and a theater for motion pictures and performances. “Erection of a fashionable resort hotel has been discussed,” the article said.

Another group, the article said, was “interested in turning the former Ole Hanson residence into a hotel, with cottages surrounding the home.”

No hotels resulted at either location. But in 1937, a posh Casino San Clemente dance hall opened, and in 1938, so did the elegant San Clemente Theatre—neighbors to each other and the beach club.